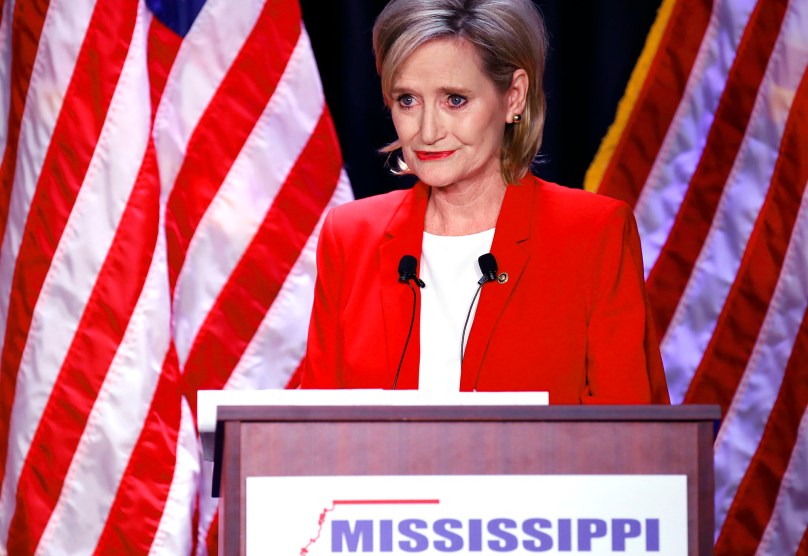 Mississippi Republican Senate candidate Cindy Hyde-Smith apologized during a debate tonight for her “public hanging” remark at a rally in Tupelo nine days ago. The remark sparked fierce public criticism that only increased when she refused to back down, saying repeatedly, “We put out a statement and we stand by that statement.”

In a rambling explanation, she initially attempted to frame her controversial remarks—in which she said that if a local cattle rancher “invited me to a public hanging, I’d be on the front row”—as a mere metaphor. It was no more literal, she argued, than when she said she would stick her hand in a circle saw for that same supporter, who lost his parents when he was in high school. It didn’t mean she would physically put her hand in a circle saw.

Finally, she concluded, “For anyone that was offended by my comments, I certainly apologize.”

Mississippi has a gruesome history of lynching—from 1882 to 1968, 581 people were lynched there, more than in any other state, according to the NAACP. Hyde-Smith’s Democratic opponent, Mike Espy, is black, as are 40 percent of the state’s residents.

After her apology, Hyde-Smith accused her opponent of “twisting” her flippant comment into a “political weapon.”

“That is just wrong, it is unfortunate, and that’s the type of politics Mississippians are tired of,” she said.

“No one twisted your comments because your comments were live,” Espy retorted. “I don’t know what’s in your heart, but we all know what came out of your mouth.”

This was not the only controversial remark Hyde-Smith has made during the campaign. While in Starkville, where Mississippi State University is based, she said it might be “a great idea” to make it “just a little more difficult” for “liberal folks in those other schools” to vote. Espy asserted that Hyde-Smith had played into a damaging “stereotype” of Southerners, echoing an ad his campaign released hours before the debate.

We've worked hard to put the stereotypes that hurt our state behind us. We can't afford a senator who embarrasses us.

Espy clearly recognized the opportunity in attacking Hyde-Smith over the statement that has garnered national attention. The Democratic candidate, who is best known for his work as secretary of agriculture in the Clinton administration, was asked about what he expected his availability to his potential constituents would be. He emphasized the importance of a free press and communication between politicians and the media, and returned to criticizing Hyde-Smith for refusing to answer questions about the “public hanging” comment at a press conference “six times.”

In his closing statement, Espy once more brought up the “public hanging” comment, as well as Hyde-Smith’s description of voter suppression as “a great idea.”

“Senator Cindy Hyde-Smith made thoughtless comments that harmed our state, hurt our jobs, and hurt our economy—you got companies like Walmart, who today said that her comments did not reflect the values of their company, and they do not reflect the values of our state,” Espy said. “And we got a senator here talking about public hangings and talking about voter suppression. Ladies and gentlemen, I’m not going back to yesteryear, we are gonna move forward.”

This was the only debate between the two candidates, who are vying to fill the seat vacated by Thad Cochran last year. Gov. Phil Bryant appointed Hyde-Smith to fill the vacancy in March. The final vote will take place November 27.