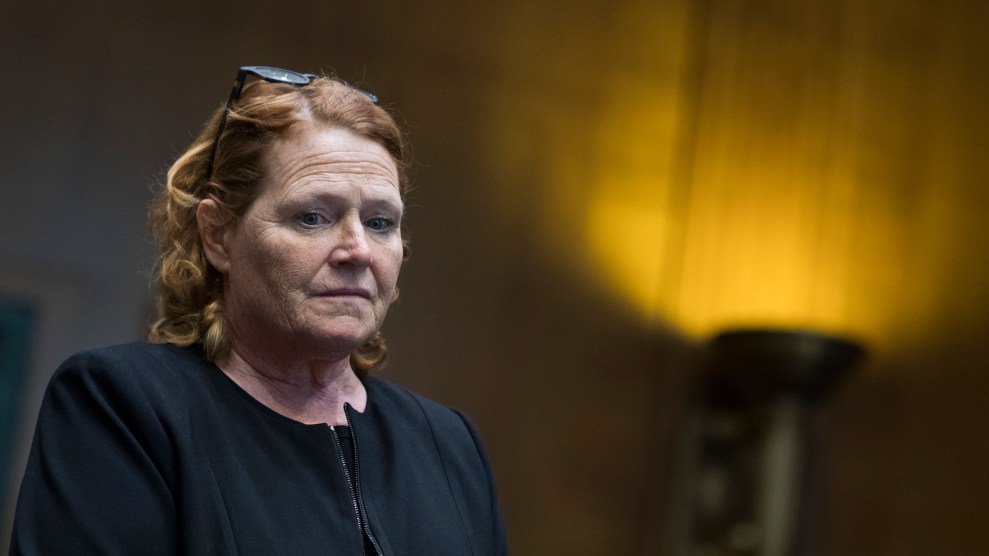 Heidi Heitkamp, North Dakota’s first female senator and the only Democrat currently holding statewide office, has lost her seat to Republican Rep. Kevin Cramer in one of the most closely watched Senate races of the 2018 midterms, according to MSNBC and Reuters. The victory for Cramer, a three-term House member and staunch conservative, further hurts the Democrats’ prospects in the Senate.

Heitkamp’s odds of winning—once nearly even with her opponent’s—had been looking slim for weeks. Cramer’s polling lead stretched into the double digits in September amid the confirmation fight over Supreme Court Justice Brett Kavanaugh, and his chances increased further after that court decided last month to let stand a voter ID law expected to suppress the votes of Native Americans, one of Heitkamp’s key constituencies.

In her first Senate race in 2012, Heitkamp faced similar odds only to win by a mere 3,000 votes. But this cycle, her tenacity on the campaign trail wasn’t enough to stop Cramer, a former state GOP party chair who has made his support for President Donald Trump a centerpiece of his midterms message.

Trump won the North Dakota by a 36-point margin in the 2016 presidential election. So while Cramer appealed to North Dakotans’ deep Republican loyalties, Heitkamp tried to cash in on her image as a gutsy independent, unafraid to buck party and side with the president. She even let slip this spring that Trump had personally asked her to become a Republican. (She has voted in line with his positions 54 percent of the time since 2017, according to FiveThirtyEight.) On the campaign trail, Heitkamp hammered Cramer on the issues of health care and trade, which were seen as winners among the state’s rural electorate. She criticized the congressman for voting multiple times to repeal the Affordable Health Act and its protections for preexisting conditions, and for supporting Trump’s trade war with China, which led to a 25 percent retaliatory tariff that has slammed North Dakota’s many soybean farmers.

All the while, Heitkamp appeared to avoid engaging in national political debates that could have alienated moderate Republicans, whose votes she needed to win reelection. But that became impossible this fall, during Kavanaugh’s Supreme Court confirmation hearings, when multiple women accused the conservative judge of sexually assaulting them in high school and college. As Republican senators doubled down on their pro-Kavanaugh stances, it became clear that the confirmation would hinge on the decisions of a small handful of moderates, Heitkamp included. She ultimately voted “no“—despite North Dakota polling that found strong support for the judge among her constituents.

“If this were a political decision for me, I certainly would be deciding this the other way,” she said. “I can’t get up in the morning and look at the life experience that I’ve had and say ‘yes’ to Judge Kavanaugh.”

Some called Heitkamp’s choice “political suicide” at a time when she was already slipping in the polls, but it also drew in $12.5 million in donations in the first half of October—drawing speculation that it could actually boost her flagging campaign. (Some of this goodwill toward Heitkamp later dissipated after her campaign outed and misidentified several victims of sexual violence in a newspaper ad framed as an open letter to Cramer from North Dakota survivors.)

Cramer, on the other hand, was publicly wondering aloud whether sexual assault as a teenager should really disqualify Kavanaugh from sitting on the nation’s highest court, even if the allegations were true; he called Christine Blasey Ford’s claims more “absurd” than Anita Hill’s and said that by Ford’s accusation, “nothing evidently happened” because the alleged attempted rape was not completed.

This election was the first to take place under strict new provisions in a North Dakota voter ID law that makes it harder for voters who lack a residential address to cast their ballot—disproportionately affecting Native Americans living on reservations. State Republicans passed the voter ID law in 2013, shortly after Heitkamp was a elected to the Senate with strong support from the state’s Native community, and they tightened its provisions multiple times in the following years.

Heitkamp’s defeat in North Dakota means the loss of a moderate female voice in an increasingly polarized Senate. It follows another another loss by a red-state Democratic incumbent, Joe Donnelly of Indiana.