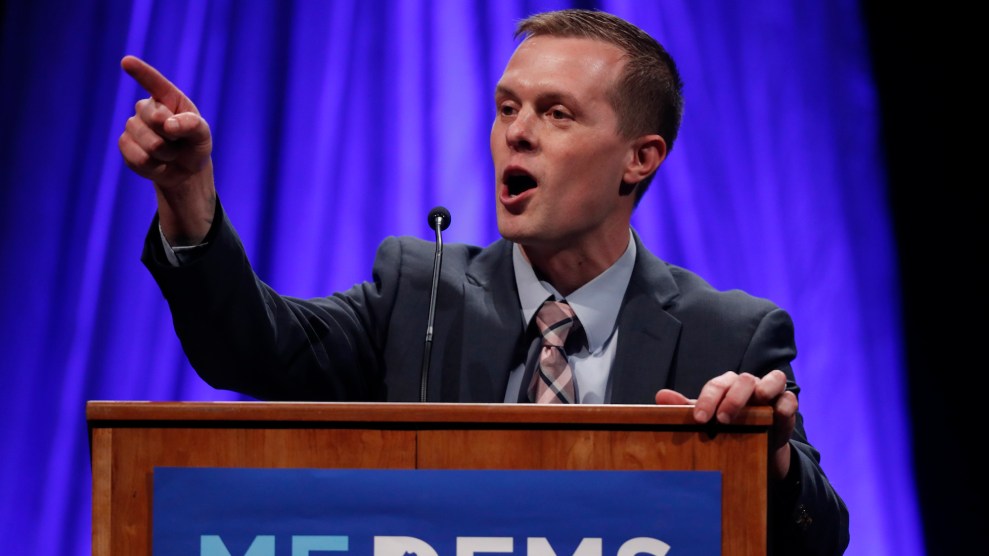 In a dramatic event streamed lived on Facebook Thursday, Maine Secretary of State Matt Dunlap declared that Democrat Jared Golden is the “apparent winner” of the race for the states 2nd congressional district. He narrowly defeated two-term GOP incumbent Bruce Poliquin after nine days vote-counting and an unsuccessful legal challenge by the Republican to the state’s ranked-choice voting system.

A Golden victory would bring the overall number of seats gained by the new Democratic House majority to at least 35—a figure that could continue increasing in the days to come. Though the 2nd district had been trending red since Poliquin first won in 2014—it delivered one of Maine’s four electoral votes to President Trump when it chose him by a 10-point margin—national Democrats included the district on their initial list of targets in January 2017. Golden, a state legislator and Marine Corps veteran, had received support from the Democratic Congressional Campaign Committee’s “Red to Blue” program.

As my colleague Daniel Costa-Roberts detailed last month, the long wait was predictable. In a ranked-choice voting system, voters rank candidates in order of preference. If no candidate receives a majority of votes after the first preferences are counted, the candidate with the fewest votes is eliminated, and a computer algorithm redistributes each of his or her supporters’ second-choice votes to the remaining candidates. The process continues until one candidate has received a majority. Earlier this summer, voters waited more than a week to learn Attorney General Janet Mills had won the Democratic gubernatorial primary. (Last week, Mills handily won the general election.)

Ranked-choice voting has been the subject to numerous legal challenges since Mainers approved its use through a ballot initiative in 2016. After the preliminary vote counts revealed Poliquin had likely received a plurality of votes in the first round—but not enough to meet the majority threshold—Poliquin sued Dunlap, asking a judge to end the counting after the first round. Poliquin argued that the US Constitution requires a mere plurality, not a majority, to be used to elect members of Congress. On Thursday morning, Judge Lance Walker denied Poliquin’s request on the basis that Maine’s voters had “cast their ballots in reliance on the RCV system” and that to stop the tabulation would “interfere” with the democratic process that the state’s voters chose for their electoral system.

Mainers may still want to double-check the results. As Dunlap and his staff awaited the results Thursday, they offered local media and Facebook Live viewers exhaustive detail about the shoestring-looking system of spreadsheets, memory sticks, and “find-and-replace” Excel operations used to tabulate the results. Over the course of the 27-minute presentation, he also showed off a few of the system’s flaws. Officials said the spreadsheets would be posted online for public inspection in the coming days.

Golden, who had been in Maine awaiting the finally tally, will now join the other Democratic freshmen in Washington, DC, for new member orientation.