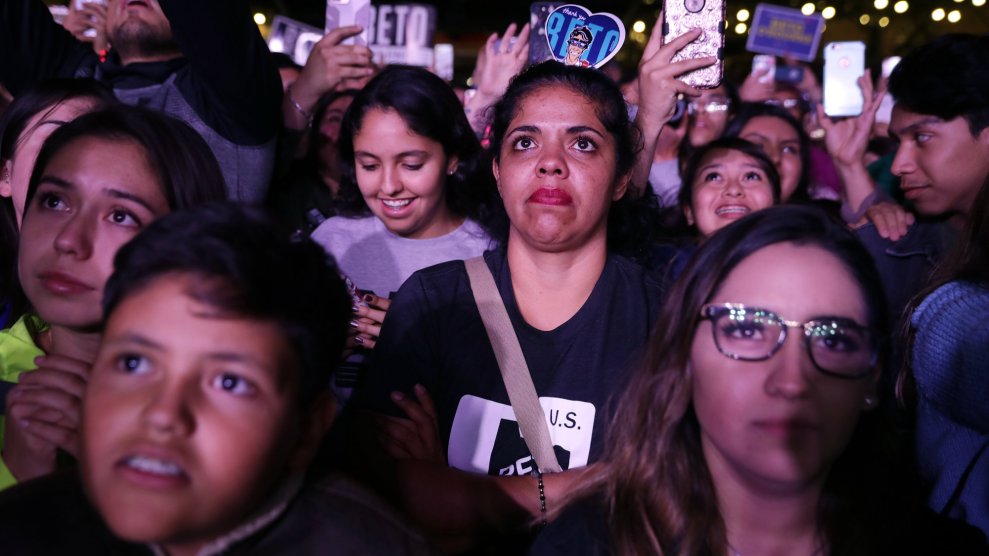 Supporters listen to Beto O'Rourke as he concedes the race on Election Day in El Paso, Texas.Chip Somodevilla/Getty Images

The midterms are over, and while we’re still waiting on final vote counts for a few races, most of the results are in. On election day, we asked you how you were reacting to the results, and whether you had a message for your elected representative.

Here’s what we heard: Many of you were overjoyed at Democrats winning the House, and are excited about the potential for House members to move forward with dozens of investigations. Some, however, urged caution, worrying that going after the Trump administration too swiftly could hurt the Democratic party’s future chances. Rep. Beto O’Rourke’s narrow loss against Ted Cruz in the Texas Senate race was an overwhelming disappointment, but many hope Beto will run for president in 2020—especially one reader in Texas who’s already printed out “2020” stickers for him. And while other closely-watched candidates lost their bids, the night still remained a win for diversity, with more than 100 women gaining seats in the House and Senate, in addition to a number of other firsts.

Read a selection of responses, lightly edited for length and clarity, below.

On Dems winning the House

“I am deliriously happy. We overcame gerrymandering, voter suppression, lying racist ads, and a tough political map in the Senate to win the House. Abrams, Gillum, and O’Rourke were long shots, but they inspire us. They will be back, stronger and better. Best of all: reasonable people got “woke.” I am going to smile all week.“ —Anonymous, Chapel Hill, North Carolina

“I am extremely interested in what the Dems do with their power. I hope they are wise—[there’s]no time for knee jerk, hit below the belt reactions. Be smart with this gift we have been handed. Do the right thing. Stay focused. Aim for 2020 with a united party.” — Kay Barnard, Sequim, Washington

“I believe the Democrats will self destruct with all their investigations and the pendulum will swing back in two years.” — K. Poletti, Brandon, Florida

“I am upset that the Democrats took back the House. We are probably looking at gridlock for the next two years. The Dems don’t want to govern for the people—[taking down] Trump seems to be their goal. Seems apparent they do not care about those who voted for them, just themselves. Going to be a long two years.” — Anonymous, Nashville, Tennessee

“I find the results discouraging. In some states the forces of racism and hatred have prevailed. Donald Trump will view these wins as vindicating his campaign of hatred and violence, and we can look forward to two more years of this. I believe that there would have to have been a fuller rejection of Trump in order to try to bring some sanity back to the political narrative. The country remains very divided. I have to wonder if we, out here in California, have anything left in common with people in the South and the real Midwest.” — Russell Jura, Newport Coast, California

“I was very confident that Democrats were going to take the House, so I’m very pumped about this. And even better than Democrats taking it, is the diversity that we are seeing getting elected. So many women, so many minorities. If for no other reason, this is a good night.” — Rachel Cunningham, Piqua, Ohio

On Beto O’Rourke: “I am sad that Beto lost but I hope to see him back running again for higher office. He brought people out and energized them and got them to vote for the first time and some voted for the first time in decades.” — Leah Allen-Russell, Chandler, TX

“I’m excited that there will be some measure of oversight of Trump and corruption in the administration. But I am incredibly disillusioned now that Beto has lost. That was the most involved I’d ever been in a race, and even with all of that effort, excitement, and participation… it still wasn’t enough. Just very, very disappointed.” — Tim, Dallas, Texas

“I am a deeply depressed Ohio voter. While it looks as if Sherrod Brown will return to the Senate, the state government will remain red, giving a green light to the oil and gas industry that is destroying much of the eastern half of the state.”— Rebecca Phillips, Marietta, Ohio

On Lauren Underwood‘s win in Illinois’s 14th congressional district: “Lauren, you are my hero. First thing I did after I read this was share it with my daughter. You give me tremendous hope and optimism that we can emerge as a better people and nation from these dark times.” — Sridar, Menlo Park, CA

On the blue wave

“I had expected the Blue Wave to be bigger, so disappointed that there was not more rejection of the excesses of Trump and the Republicans. I fear that, unless there is a big outcome from Mueller or a really serious finding from the potential Democrat enquires, there is a real chance Trump will be re-elected. People don’t care WHO got the economy going, he has the incumbent advantage, Democrats need votes from people who just aren’t voting. I really think it will all hang on the Democratic candidate being able to appeal to a wide range of voters and being able to stand up to Trump. With huge regret, I say: not a woman and not a person of color. If I had a vote, it would be for Beto.” — Janet Pollard, England

“I wish the “Blue Wave” was bigger, of course, but I can live with the victories we did achieve. The House will look a lot more like the outside world and not simply old, white men. The big step forward with all the female wins gives me a huge boost of confidence.” — Lynn Warde, Cortaro, Arizona