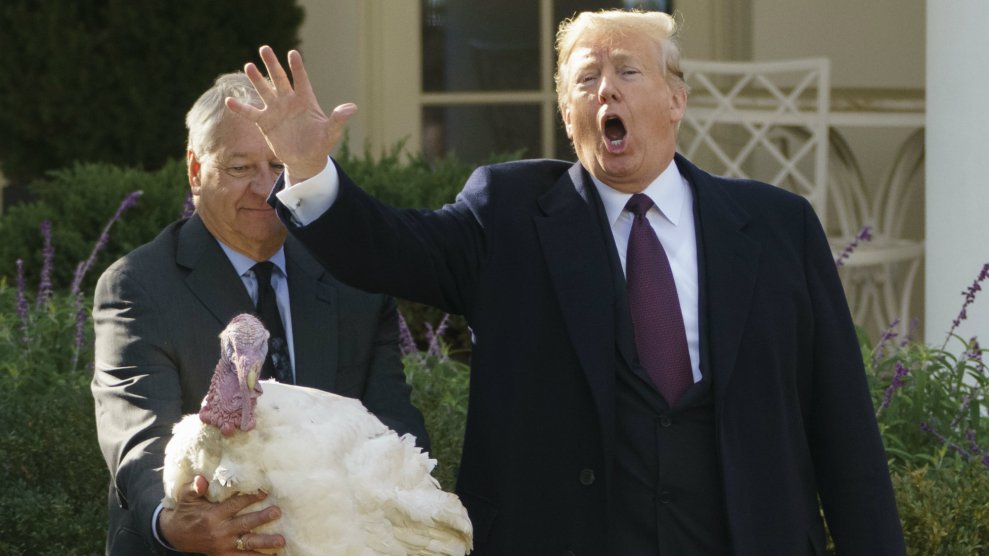 While millions of people spent time with their loved ones over the Thanksgiving holiday, maybe doing a little shopping on Black Friday, President Trump spent the last few days firing off tweets about Chief Justice John Roberts, global warming, the media, and immigration.

On Wednesday night, two days before his administration dropped a damning climate report which warns that the planet will be three degrees warmer by 2100, the president tweeted a blatantly false myth about climate change.

Whenever it’s unusually cold, as it was for much of the Eastern United States on Thanksgiving day, the most determined climate deniers announce the cold weather disproves that global warming is real. Trump said the same thing during a 2017 cold snap.

On Thanksgiving day, Trump resumed attacking Chief Justice John Roberts and the Ninth Circuit. In a rare response from a Chief Justice to a President, Justice Roberts criticized Trump for calling a federal judge who ruled against the administration’s asylum policy, an “Obama judge.” Roberts said there were no such thing as Obama judges or Bush judges, but that these judges were independent.

Trump responded via tweet, “Sorry Chief Justice John Roberts, but you do indeed have ‘Obama judges.'”

Sorry Chief Justice John Roberts, but you do indeed have “Obama judges,” and they have a much different point of view than the people who are charged with the safety of our country. It would be great if the 9th Circuit was indeed an “independent judiciary,” but if it is why……

The president further described the Ninth Circuit as a “disaster” and said that if law enforcement officials aren’t able to do their jobs there will be “bedlam, chaos, injury, and death.”

Justice Roberts can say what he wants, but the 9th Circuit is a complete & total disaster. It is out of control, has a horrible reputation, is overturned more than any Circuit in the Country, 79%, & is used to get an almost guaranteed result. Judges must not Legislate Security…

….and Safety at the Border, or anywhere else. They know nothing about it and are making our Country unsafe. Our great Law Enforcement professionals MUST BE ALLOWED TO DO THEIR JOB! If not there will be only bedlam, chaos, injury and death. We want the Constitution as written!

On Black Friday Trump took a shot at the media in response to a Wall Street Journal story describing his dissatisfaction with Treasury Secretary Steve Mnuchin. According to the report, Trump isn’t happy with Jerome Powell, Mnuchin’s pick for chair of the Federal Reserve because  he has been raising interest rates, an economic move the president worries will hurt his 2020 re-election campaign. According to the president, the story is riddled with “phony sources” and “jealous people.”

I am extremely happy and proud of the job being done by @USTreasury Secretary @StevenMnuchin1. The FAKE NEWS likes to write stories to the contrary, quoting phony sources or jealous people, but they aren’t true. They never like to ask me for a quote b/c it would kill their story.