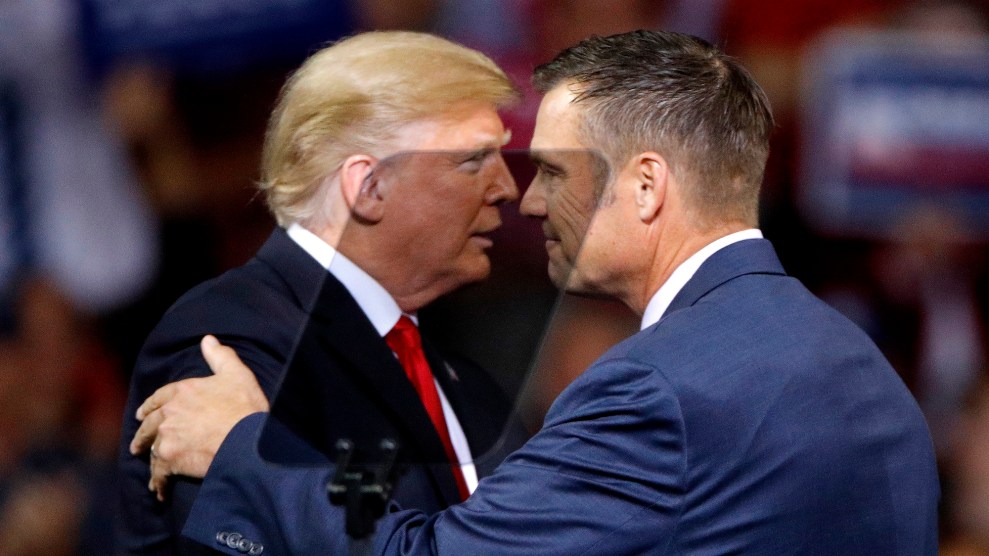 The reason was a 2011 Kansas law requiring a government-issued photo ID to cast a ballot. Jones’ state ID had expired in 2010. She couldn’t get a new ID because her expired state ID listed her married name, Jones, but her social security card and birth certificate listed her maiden name, Santos. Without matching underlying documents, the DMV in Wichita wouldn’t issue her a photo ID for voting. She couldn’t change her name through the social security agency because her state ID listed a different last name and was expired, and she didn’t have proof of residency, which was also required to obtain a new ID, because her apartment bills were in her roommate’s name.

Jones, a shift manager at a drug store chain, brought her expired Kansas ID with her to the polls in each of those three elections, but she was forced to cast a provisional ballot that was not counted. “I was born here,” she says. “I’m a US citizen. I have the right to vote, but no one will give me the right ID.”

The voter ID law was the brainchild of Kris Kobach, Kansas’ secretary of state and 2018 Republican gubernatorial candidate. Kobach is now overseeing his own election, and his signature law could make him the state’s next governor by keeping Democratic-leaning voters from the polls in what’s shaping up to be a very close race.

Kobach is the former vice chair of President Donald Trump’s now-disbanded election integrity commission and the loudest voice within the Republican Party championing new laws to restrict access to the ballot. “Because of the law that I drafted and the Kansas legislature passed, Kansas now has the most secure election laws in America,” Kobach said when Trump campaigned for him in Topeka on October 6. “Photo ID creates trust in our elections.”

Kobach has dismissed the idea that his law might disenfranchise voters. “I don’t think it’s a burden to reach into one’s wallet or one’s purse and pull out a photo ID,” he told an advisory committee of the US Commission on Civil Rights. “Someone could argue that you’re exerting calories when you’re doing that, and there is some process. I don’t think that’s a burden.”

But since Kobach became secretary of state in 2011, more than 1,200 ballots have been rejected in Kansas because would-be voters like Jones showed up without the right ID, and far more Kansans have been dissuaded from trying to vote. The voter ID law caused a 2 percent decrease in turnout in 2012, according to a study by the Government Accountability Office, with the largest drop-off among young, black, and newly registered voters. If the law leads to a similar reduction in turnout among Democratic-leaning constituencies in 2018, that could be enough to put Kobach, who won his primary by just 350 votes, in the governor’s mansion. He’s currently locked in a dead heat with Democratic candidate Laura Kelly, the assistant minority leader in the state senate, in a race that also includes independent candidate Greg Orman.

“I was born here. I’m a US citizen. I have the right to vote, but no one will give me the right ID.”

Despite Kobach’s claims that no one is being disenfranchised, Jones’ story highlights the burden that Kansas voters have faced due to the voter ID law. She made seven trips to different government agencies and spent countless hours on the phone with the DMV trying to obtain a voter ID. In August, after having her ballot rejected in three elections, she went to the DMV and said, “I’m not leaving without an ID.” She brought a pay stub from work, a state government-issued letter confirming her enrollment in the food stamp program, her marriage license, and her expired ID. The DMV officials finally relented, agreeing to make an exception for her due to her impossible situation and issuing her an ID, but they charged her $22 for what Kobach had said was a “free state ID” for voting.

“It’s absolutely ridiculous,” Jones says. “Their whole stance is, ‘It’s so easy to get an ID, and it’s free. It’s not a hardship.’ That’s not true. I don’t make very much money, and I was lucky to have $20 in my pocket that day.” She likens the law to a poll tax. “If I didn’t give them my money, they wouldn’t have given me a say in their government,” she says.

But she’s excited that her vote will finally be counted next week. “It’s the only way we get to have a say in our government,” she says. “It’s our civic duty.” She considers herself a Democrat and plans to vote for Kelly over Kobach. “He’s clearly crooked,” she says. “He’s using the ID law to swing elections in his favor.”

Molly McGrath, a lawyer and organizer for the American Civil Liberties Union, spent the 2016 election in Wisconsin, helping voters obtain the IDs they needed to vote. Wisconsin’s voter ID law led to a sharp decrease in black turnout in 2016, which helped Trump carry the state. A year ago, she came to Kansas to continue her work helping people vote, and she saw similar evidence of disenfranchisement. “What I saw was a lot of people who wanted to vote but couldn’t vote, a lot of people who didn’t have the IDs they needed to vote, and people who had voted and didn’t realize that their vote didn’t count,” says McGrath, who was based in Wichita in fall 2017 and spring 2018 before returning to Wisconsin to work on a voter education campaign. When she visited soup kitchens and homeless shelters, she says, “you certainly didn’t have to search to find people who were disenfranchised.”

In September 2017, McGrath took a 59-year-old African American Wichita resident named Sammy Gray to the DMV to get an ID for voting. Gray brought his expired Kansas ID and a copy he’d made of his birth certificate. But DMV officials told him they needed a government-issued copy of the birth certificate to issue him an ID. Gray no longer had his original birth certificate, so he would have to pay for Texas, where he was born, to issue him a new copy—a financial hardship given that he was on disability and had little money. “It’s absolutely a modern-day poll tax,” McGrath says. “But it’s not surprising. If they’re trying to make it harder to vote, you’re not going to put any effort into making the system easy and the IDs accessible.”

Gray, who served in the military, eventually got an ID card from the VA. But he wasn’t sure if it would be valid for voting this election. “I don’t know if it will be accepted or not,” he says.

It should be. Under Kansas’ voter ID law, any IDs from a “municipal, county, state, or federal government agency” are permitted for voting. But in practice, IDs that should be accepted frequently aren’t, according to an extensive report by the Kansas Advisory Committee to the US Commission on Civil Rights, which found evidence of poll workers “erroneously rejecting voter identification that is in fact valid.” Students, veterans, military members, and Native Americans were all wrongly turned away from the polls because poll workers told them their IDs weren’t valid, according to the report.

One city employee in Wichita, who asked to remain anonymous, forgot his driver’s license when he went to vote in 2017 but had his city ID badge, which should have been accepted as a valid municipal government ID, along with expired driver’s licenses in his wallet. He says he was forced to cast a provisional ballot that wasn’t counted. “I think at that point it was pretty clear I was who I said I was,” he says. “I understand needing ID to verify who you are, but I feel like I provided them with other forms of ID.”

The Wichita city employee and Gray, who both identify as Democrats, plan to vote against Kobach.

What McGrath calls a “labyrinth of confusion” stems partly from the fact that Kansas has spent little money to educate voters, poll workers, and DMV staff about the law. The state spent only $60,000 in 2012 and $200,000 in 2013—and nothing at all in subsequent years—on voter education about the law, far less than states with similar laws, such as Indiana, which spent $2.2 million advertising the details of its voter ID law.

Kobach claims his ID law is necessary to stop voter fraud, but he has uncovered little evidence of fraud before or after the passage of the voter ID law. In 2015, he became the only secretary of state in the country with the power to personally prosecute voter fraud cases, but he has won only about a dozen convictions, mostly from voters who were confused about voting rules.

The voter ID law written by Kobach also included a provision requiring proof of citizenship to register to vote, such as a birth certificate, a passport, or naturalization papers. That law blocked 35,000 Kansans from registering to vote—1 in 7 who tried to register—nearly half of whom were under 30. Kobach claimed he’d found evidence that thousands of noncitizens were registered to vote in Kansas, which he called “the tip of the iceberg.” But a federal judge found that “at most” 67 noncitizens had registered between 1999 and 2013, representing .002 percent of all registered voters in Kansas. “There is no iceberg; only an icicle,” District Court Judge Julie Robinson wrote in June, when she struck down the law after having blocked it temporarily in 2016. She determined that “tens of thousands of voters” were at risk of being disenfranchised. She also held Kobach in contempt of court for having “willfully failed to comply” with her 2016 order by refusing to tell voters who had been prevented from registering that they were now eligible to vote. She further ordered Kobach to take six hours of continuing legal education courses to remedy “repeated and flagrant violations” of court rules.

But though the proof of citizenship requirement has been struck down, the ID law remains in effect. McGrath is concerned that eligible voters who don’t possess the right ID—or think they don’t—will “fall through the cracks” and stay home next Tuesday.

Democratic leaders in the state legislature have called on Kobach to recuse himself from overseeing the governor’s race. They noted that as secretary of state, he appointed election clerks in the state’s four largest counties, home to half the voters in the states, and he provides guidance to election officials. “We have an incredibly unique situation in Kansas today where the man who will count the votes could benefit by that count,” Jim Ward, the House minority leader, said at a press conference last week. “Remember, we’re talking about an election that can be determined by 300 or 400 votes. So, 50 here, 50 there, 50 there, pretty soon, you’ve stolen an election.”