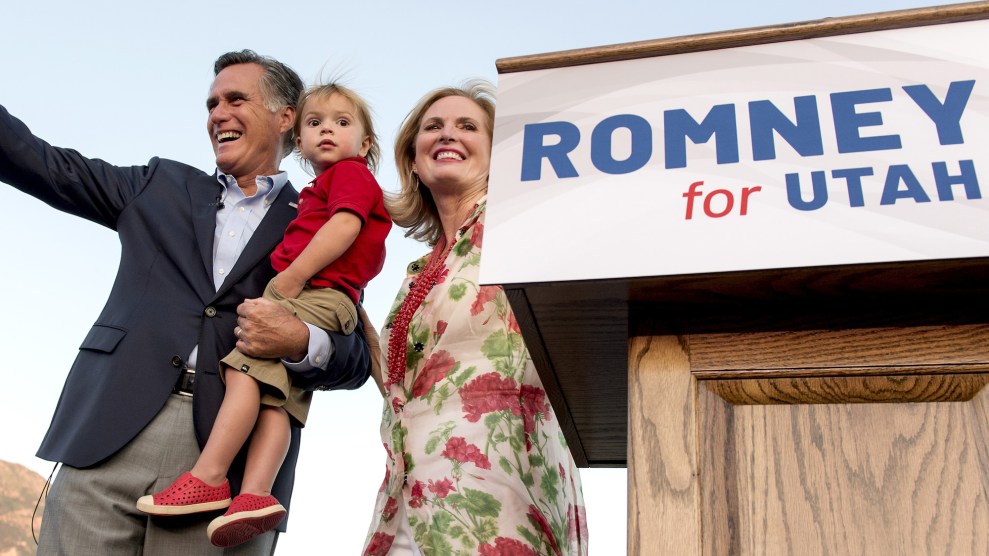 Mitt Romney and Ann Romney celebrate onstage after Mitt was declared the winner of the 2018 Utah Republican Senate primary on June 26 in Orem, Utah. Brian Cahn/ZUMA

Mitt Romney broke a 16-year political losing streak on Tuesday, when the former Republican presidential nominee handily won a race for US Senate in Utah.

Romney, 71, hadn’t run a winning campaign since 2002, but it wasn’t for lack of trying. He first ran for the Senate in Massachusetts in 1994, challenging incumbent Ted Kennedy (D), who beat him by a 17-point margin. Romney won the Massachusetts governor race in 2002, but then slogged through two failed presidential campaigns. He decided against a third go in 2016 after many of his big donors declined to get on board.

For the past five years, Romney has essentially been retired. In 2013, he moved to Utah, where two of his sons live and where Romney lived when he worked on the 2002 Winter Olympics. He and his wife, Ann, built a McMansion in Holladay, Utah, near Salt Lake City—complete with a secret room behind a bookcase. He’s been spotted in Wal-Mart parking lots, and earlier this year, he captured video footage of a house in his neighborhood burning down and sent it to the local TV station, which featured it in a web story.

He largely stayed out of politics. But in March 2016, Romney made headlines when he criticized then-candidate Donald Trump, saying, “Donald Trump is a phony, a fraud. His promises are as worthless as a degree from Trump University. He’s playing members of the American public for suckers: He gets a free ride to the White House, and all we get is a lousy hat.”

Last year, 84-year-old Sen. Orrin Hatch (R-Utah) was on the fence about whether to run for an eighth term. He’d promised his previous election would be his last, and polls showed that nearly 80 percent of Utahns though Hatch should not run again. Utah party leaders, and Hatch’s wife, were reportedly urging him to retire. Former Trump political adviser and right-wing flamethrower Steven Bannon had been threatening to recruit an anti-establishment primary challenger against Hatch in 2018 as part of a larger effort to bring his brand of “economic nationalism” to the Senate. State party leaders were eager to avoid such a battle, in part because Utah’s GOP nominating system, in which candidates are selected through a convention of delegates rather than in a traditional primary, is vulnerable to upstart campaigns by extremist candidates. That’s how Sen. Mike Lee knocked off three-term incumbent Sen. Robert Bennett in 2010, and former Rep. Jason Chaffetz ousted a six-term incumbent in 2007.

Some of Romney’s biggest financial backers helped nudge Hatch out of office by funding the Hatch Center at the University of Utah, a politics institute to honor his legacy that will house the archives of Hatch’s 42 years in the Senate and train future politicians. President Trump lobbied Hatch to run again to keep Romney out of the Senate, but in January, Hatch announced his retirement. Romney announced his entry into the Senate race about six weeks later. Not everyone in Utah was thrilled.

Some saw Romney as a carpetbagger, despite his long ties to the state. The state GOP chair, Rob Anderson, attacked Romney publicly, comparing his bid to Hillary Clinton’s 2000 campaign for Senate in New York. (He later apologized.) But some of the irritation in the party stemmed from the fact that Utah hadn’t had an open Senate seat since 1992. Hatch had been squatting on his political fiefdom for 42 years. Hatch’s retirement had new, younger candidates eager for a shot at the open seat. Those hopes were dashed once Romney entered the race.

After more than 70 percent of the state voted for Romney in the 2012 presidential election, his Senate victory seemed all but certain. But in April, he lost the GOP nominating convention to a far more conservative state legislator who spent only $31,500 on the race. (Romney spent between $500,000 and $1 million, according to his campaign filings.) Party rules forced Romney into a June statewide primary, which he won handily. Since then, he’s been treated as Hatch’s heir apparent, with the Democratic nominee, Salt Lake County Council member Jenny Wilson, barely registering in the polls. (Only about 27 percent of the Utah electorate votes Democratic, and voters there haven’t elected a Democrat to a statewide office since 1980.)

Nonetheless, Romney made the obligatory campaign stops, officiating a hot dog-eating contest at the Utah County Fair and making his signature corny jokes. (“It’s wiener take all,” he quipped at the hot dog contest.) He attended the Iron County Republicans’ Lincoln Day Dinner, in rural southern Utah, where he was hit with a barrage of questions about whether he’d support legislation to legalize polygamy and a woman invited one of his female staffers to become a “sister wife” in her polygamist family.

Romney dodged the polygamy questions, and went on to win the Senate race.