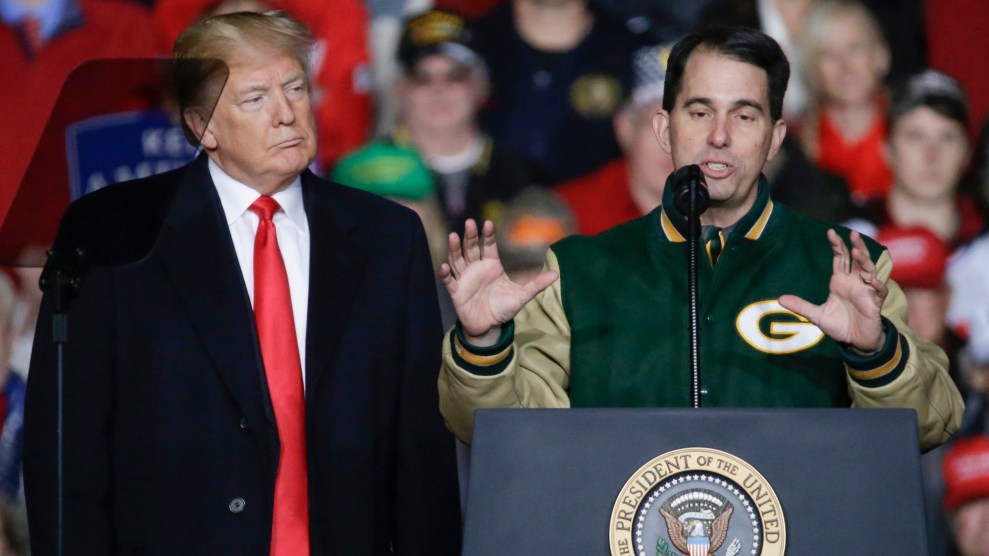 Wisconsin is ready to move on from the Scott Walker era. The Associated Press and Politico are projecting that the state’s Republican governor has lost his reelection, with Democrat Tony Evers set to become Wisconsin’s next top official. This was Walker’s fourth campaign for governor. He first won in 2010, survived a recall election in 2012, and won a second full term in 2014.

Walker’s longevity in office prior to this year can partially be attributed to his success in rolling back labor rights in Wisconsin.

Evers, who spent most of his adult life working as a school administrator and the past nine years as the state’s elected nonpartisan superintendent, focused his campaign on Walker’s education record. Shortly after Walker took office in 2011, the new Republican governor launched an assault against public employee unions, pushing through Act 10, a bill that stripped them of their right to collective bargaining (along with a host of other changes that made it more difficult for unions to continue operations). As a result, public school teachers in Wisconsin now earn far less than they did before Walker took office when accounting for benefits. That’s resulted in a teacher shortage, with older teachers retiring early and recent college graduates deciding to forgo a career in education or looking for jobs in other states.

But Walker didn’t just attack teachers and their union. At the same time, he drastically cut funds for K-12 education; the state spent $792 million less on schools under his first two-year budget. Walker has gradually restored a bit of that funding—especially once it became clear Evers would enter the governor’s race and push education as an election issue—but the state has still spent less money over Walker’s tenure than if the budget had just been left on autopilot.

Walker’s longevity in office prior to this year can partially be attributed to his success in rolling back labor rights in Wisconsin. Sure, part of the reason Walker and other Republicans attack unions is rooted in principles and ideology, a belief that giving workers an official voice at the table impairs business or government too much. But the effort to weaken labor unions was also explicitly designed to weaken a key ally for Democrats. Organized labor in Wisconsin had served as one of the top campaign finance engines and get-out-the-vote machines in Wisconsin; thanks to Act 10 and a subsequent private-sector right-to-work law backed by Walker, unions in Wisconsin are on the retreat. Before Walker took office, 14.2 percent of people working in the state belonged to a union; by last year, that was down to 8.3 percent.

Listen to our journalists explain all the twists and turns of Election Day and what comes next on the special election episode of the Mother Jones Podcast.

Despite Evers’ win, much of that damage Walker created for unions is unlikely to be undone anytime soon. While results are still coming in, it’s likely that Republicans will control at least one branch of the state Legislature. When I interviewed Evers in August, a week after he’d secured the Democratic nomination, he was resigned to the fact that he was unlikely to be able to fully repeal Act 10. Instead, he hoped to change it at the margins. “I think there are things we can do to be building blocks to get back to having meaningful collective bargaining in the state,” he said. “But it’s not going to happen immediately, just because of the makeup of the Legislature.”

Evers was hopeful he could convince Republicans to repeal the private-sector right-to-work legislation, and he thought there could be bipartisan deals to end some of Act 10’s more onerous restrictions on public-sector unions, such as the requirement that every local union must hold a recertification election under challenging rules each year. “It’s insane. I think we can change that,” Evers told me. “I really do. That’s just patently unfair.”

Union rights were far from the only conservative policies implemented under Walker. As governor, he pushed strict voting restrictions—some of which likely helped tip the state to Donald Trump in the 2016 presidential election. When I interviewed him, Evers called Walker’s voter ID law “a real stain on this state” and said he would push for an automatic voter registration system like the one used in Oregon.

In the final weeks of the campaign, health care also became a major issue. Walker was increasingly on the defensive about his past record of attacking the Affordable Care Act. Walker even cut ads claiming he would ensure the state maintained preexisting-conditions protections—despite his past efforts to undermine the law. Walker had rejected federal funds from Obamacare to expand Medicaid to the working poor, and last week the Trump administration approved Walker’s request to add a work requirement to the state’s Medicaid program

Evers ran as an unabashed fan of Obamacare—health care is personal for Evers, who survived esophageal cancer a decade ago after having his esophagus and part of his stomach removed. He promised to expand Medicaid, making coverage available to a projected 80,000 more Wisconsinites. “Take the money, set up the exchanges, and possibly even have a [state-run] public option for people,” Evers told me back in August.

We want to hear from you. How are you reacting? Do you have a message for the winner? Let us know by filling out the form below, send us an email at talk@motherjones.com, or leave us a voicemail at (510) 519-MOJO. We may use some of your responses in a follow-up story.