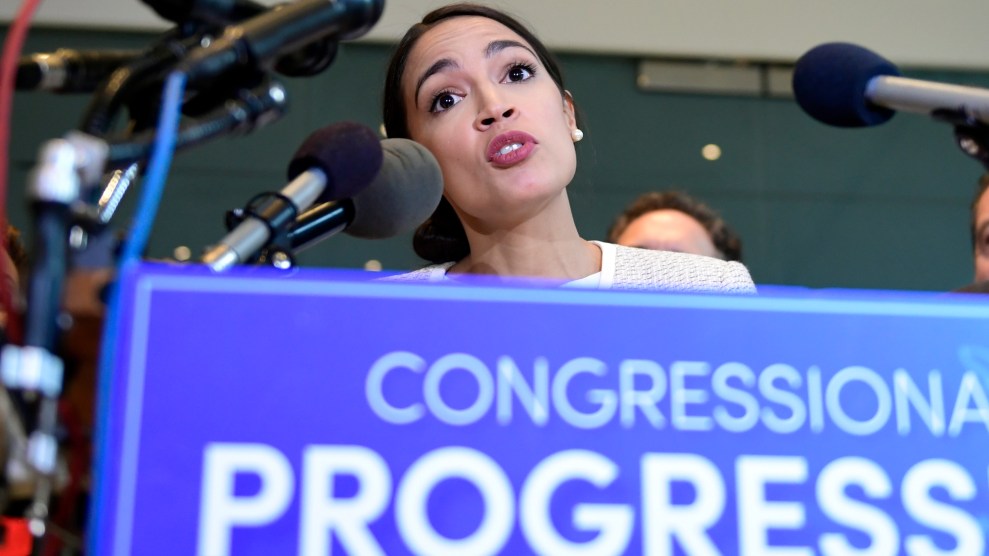 Rep.-elect Alexandria Ocasio-Cortez at a press conference with members of the Progressive Caucus in Washington on Monday, Nov. 12, 2018.Susan Walsh/AP/AP

On Monday afternoon, just a block from the White House, a dozen of the country’s most liberal lawmakers gathered in the lobby of the AFL-CIO’s headquarters. The mood was jubilant as Reps. Mark Pocan (D-Wis.) and Pramila Jayapal (D-Wash.)—the co-chairs of the Congressional Progressive Caucus—introduced 10 new members of the group to the Washington press corps. A throng of reporters had come to see some of the Resistance’s brightest stars, like New York’s Alexandria Ocasio-Cortez and Massachusetts’s Ayanna Pressley, together in the nation’s capital for the first time.

“The press is paying attention to us!” Jayapal said. “I like this!”

Representatives from the progressive groups MoveOn and Indivisible were there, too, eager to celebrate a group of new lawmakers who they view as closely aligned with the the priorities of liberal activists.

“This an opportunity for Democrats to have conversations within the party about what kind of party we’re going to be.”

The 2018 midterms have transformed the CPC from a caucus Pocan described as once having “weak, skinny arms” into a 90-member behemoth that makes up nearly 40 percent of all House Democratic membership. And there may be more to come—the CPC is floating invitations to a handful of other incoming freshmen who ran on progressive platforms. The House’s largest values-based caucus, which has never really exercised much voting or policy influence, might finally have enough sway to push an ambitious array of legislation that includes immigration reform, Medicare-for-All, and climate action.

One vision of how these new progressives might exercise their influence emerged Tuesday, when Ocasio-Cortez joined members of the Sunrise Movement, a youth-based environmental advocacy group, for a protest outside the office of House Democratic leader Nancy Pelosi to demand that the next Congress address climate change. The display drew comparisons to tactics the tea party movement used to push the House agenda farther right under Republican control.

But the CPC’s leaders have repeatedly rejected that analogy—as well as speculation that they’ll vote as a bloc in an attempt to force their agenda in the way that the arch-conservative House Freedom Caucus has done. Still, the CPC’s leaders have spent the past week laying the groundwork for a strategy that includes winning representation on key congressional committees and leveraging the grassroots activism that helped Democrats take over the House in the first place.

That’s where the CPC’s allies come in. Among them is Indivisible, the national activist network founded in reaction to President Donald Trump’s 2016 victory that now boasts more than 5,000 chapters. It played a key role in defeating Trump’s efforts to undo Obamacare, and its army of volunteers labored tirelessly to turn red districts blue and blue districts bluer. Their efforts helped deliver roughly 20 new members to the CPC and encouraged Democratic candidates to adopt progressive positions.

Indivisible was on-site at the AFL-CIO headquarters on Monday to help lead trainings for the CPC members. On Tuesday, the group introduced a new guide intended to help its activists go on “offense.” The document explains the points of leverage Democrats will have after winning control one chamber of Congress—specifically, “agenda-setting” powers that will enable House Democrats to put forward legislation that demonstrates the party’s priorities.

“It’s unlikely that the vision of progressive legislation we’re hoping for is going to pass, but there’s a lot we can accomplish during that time,” says Leah Greenberg, a co-founder of Indivisible. “This an opportunity for Democrats to have conversations within the party about what kind of party we’re going to be.”

Greenberg says Indivisible groups will work to apply pressure to members of Congress across the board—including those in the CPC—to garner support for their priorities. CPC leadership will meet with Indivisible, MoveOn, and other progressive partners every few weeks to in an effort to align their agendas and grassroots efforts.

“It’s one thing to have a lobby corps in Washington, DC, that represent special interests,” Pocan said. “It’s another thing to actually be able to lobby a member of Congress with their own constituents in large numbers. And that’s something that literally no special interest has, but groups like Indivisible certainly have.”

In addition to the grassroots effort, the CPC wants its size to be reflected across key congressional committees. In a meeting with Jayapal and Pocan late Thursday afternoon, Pelosi committed to shuffling the “seasoned” incumbent CPC members’ current assignments so they are more proportionally represented on powerful congressional panels, such as Ways and Means, Appropriations, and Energy and Commerce—the last of which has come under particular scrutiny this week, thanks to Ocasio-Cortez’s climate activism. No names were floated during the meeting with Pelosi, only the fact that the shuffling will occur.

Pelosi also said freshmen members whose personal and professional backgrounds align with those key committees would be considered for plumb assignments. (One might imagine, for example, that Katie Porter, who unseated Republican Mimi Walters in California’s 45thcongressional district, would find herself on Financial Services, given her consumer protection background.)

Critics have suggested that CPC’s size makes it too ideologically diverse to wield real influence. Some have called for paring down the caucus to a core group of 30 or 40 members who move in lockstep, essentially giving them veto power over any legislation Democrats hope to pass without Republican support.

But the CPC leadership dismisses the idea of any purity tests among its members. Its leverage, they argue, comes from its numbers. And while Pocan and Jayapal were encouraged by Thursday’s conversation with Pelosi, they haven’t yet committed to backing her bid for the speakership. It’s possible that by withholding their support, at least for now, they hope to extract additional concessions.