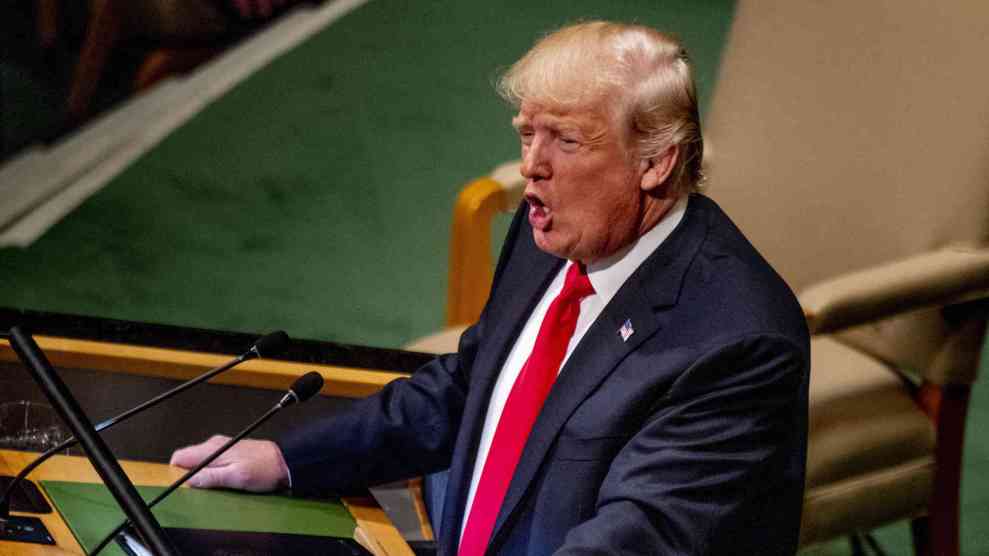 A few weeks ago, I wrote an article, cheekily headlined “The Most Important Election of our Lives,” in which I noted that the midterm contests that are now upon us were less an ideological policy clash between right and left, Republican and Democrat, and more a fight between the forces of demagoguery, falsity, and norm-busting and those favoring reality-based politics, shared values, and productive and fair-minded discourse. In the week leading up to this reckoning, President Donald Trump and his cultish followers have proved the premise of that article. Moreover, they have made clear that these elections are fundamentally a battle for decency.

As the elections approached, Trump has been at his Trumpiest, tossing out lies at a record rate and spreading demagogic fear. He conjured up the phony threat of invading migrant hordes slowly caravanning through Mexico toward the United States. His fact-free warnings have made it seem that White Walkers (see Game of Thrones) and their army of the undead are progressing toward your hometown (wherever it is). Fact-checkers have jumped on Trump’s false claims about the caravan. Even the staid Associated Press called him out: “President Donald Trump is spreading misleading rhetoric about the nature of Central American migrants heading to the U.S. border and grossly inflating the number of immigrants living in the U.S. illegally.” But as has been obvious since he rode down that beautiful escalator, Trump doesn’t give a damn about truth. And now he is so bent on frightening voters, he will say and do anything. And that doing-anything includes ordering 15,000 troops to the Mexican-American border to vanquish this nonexistent threat. Trump is no Jon Snow, and there are no dragons. But he has cast himself as the producer, director, and heroic star of a horror movie. Yes, he is telling his base and other voters he hopes to scare to the polls, that zombies are real and coming for them.

Trump made this all worse—it is always possible for him to make a situation worse—with a racist ad his campaign put out urging voters to support Republicans in the House and Senate elections. The spot claimed that Democrats allowed a Mexican citizen who killed two cops in California to enter the United States and remain in the country. “Democrats let him into our country,” the ad proclaims, and “Democrats let him stay.” No surprise, Trump’s allegations were bogus. (The cop-killer’s last illegal entry into the United States happened during the George W. Bush years, and most of his time living undetected in the United States occurred when a Republican was in charge of the federal government.) Politifact awarded Trump a “pants on fire” rating for this lie. CNN refused to air the ad, though other networks did. Subsequently, NBC pulled the ad. Fox did so, too. (You read that right: This ad was too Trumpy, false, and racist for Fox News.)

It is easy to become inured to Trump’s hate-driven, reality-defying antics. But he once again demonstrated there are no boundaries to his foulness. He exhibits no reluctance to issue reckless and untrue charges designed to exploit and heighten the divisiveness in the nation’s political culture. And this ad was only one such recent blow against common decency.

Trump managed to exploit both of the horrendous events of the final week before the midterms: the shooting at a Pittsburgh synagogue that left 11 Jewish Americans dead and the attempted bombing of the Clintons, the Obamas, billionaire George Soros, and other Trump critics.

The day after attending one of the funerals/memorial services in Pittsburgh, Trump used the event as the basis of an archly partisan message. He tweeted, “Yesterday in Pittsburgh I was really impressed with Congressman Keith Rothfus (far more so than any other local political figure). His sincere level of compassion, grief and sorrow for the events that took place was, in its own way, very inspiring. Vote for Keith!”

Yesterday in Pittsburgh I was really impressed with Congressman Keith Rothfus (far more so than any other local political figure). His sincere level of compassion, grief and sorrow for the events that took place was, in its own way, very inspiring. Vote for Keith!

Rothfus, a Republican, is in a tough race against Democratic Rep. Conor Lamb. Roll Call named him the must vulnerable GOP House incumbent. So naturally, Trump exploited a massacre of Americans to score political points in Rothfus’ favor. It is clear Trump does not have the capability to bring the nation together at a time of pain and suffering. But his inability to refrain from such a stunt provides more evidence of Trump’s narcissism and his disregard for the simple basics of civility and dignity.

There’s more. Trump denounced Stacey Abrams, the Democratic candidate for governor in Georgia, as “not qualified…by any stretch of the imagination” for that job. Really? Abrams is a Yale law school graduate and was the minority leader in the state Legislature. Why would she not be qualified? Perhaps because she is an African American and a woman? This remark appeared to be yet another instance of Trump denigrating a woman and/or person of color.

And Trump displayed no concern for an American citizen targeted for assassination. A week after an explosive device was found in the mailbox of George Soros’ home in New York state, Trump gave credence to the conspiracy theory that might have motivated the suspected bomber. Soros has become a favorite bogeyman of the right, with some conspiracy nutters claiming that he has been financing that caravan of migrants slogging to America. (The suspected Pittsburgh shooter was obsessed with the caravan.) When Trump was asked by a journalist what he thought of the idea that Soros was underwriting this band of migrants, he replied, “I wouldn’t be surprised. I don’t know who, but I wouldn’t be surprised.” And he continued with the formulation he often uses to wink at or play footsie with conservative extremists and conspiracy theorists: “A lot of people say yes.” Here was a president of the United States purposefully fueling the paranoia that seemingly led to an attempted bombing and actual carnage in a place of worship.

None of this bad—deplorable—behavior on Trump’s part is ideological. He is not merely playing a vigorous role to advance his stances in fierce partisan policy debates. He is continuing—and intensifying—his war on truth and propriety. He is abusing his office, deploying troops to counter a nonexistent enemy, to create fear in order to gain a political advantage. He seeks to divide, not repair. He exploits tragedy. He engages in racism. He encourages extremism that leads to political violence and murder. Trump has been guiding the GOP and large parts of this nation into a dark place.

It’s true that many of the House and Senate races are about local concerns and matters that directly affect voters: health care, education, wages, and so on. But all these contests are occurring within a Trump-dominated context. As the egotist he is, Trump has proclaimed that this election is about him. In this instance, he is correct. That means the midterms collectively are a referendum on the damage Trump is doing to the office of the president and the political culture of the United States. Though Trump may not be on the ballot, decency is—and its future is on the line.