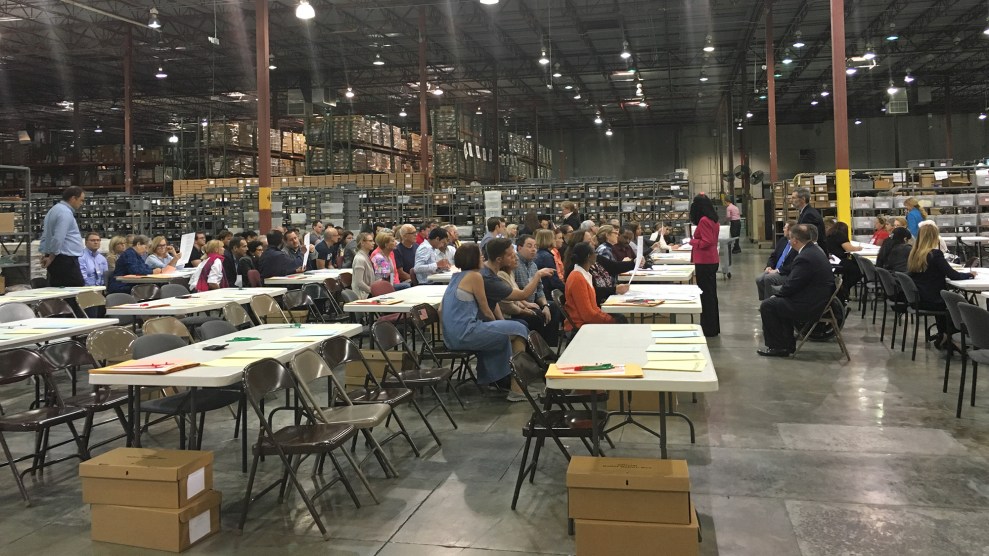 Palm Beach County Supervisor of Elections Susan Bucher gives instructions ahead of the hand recount in the Senate race on Friday.Pema Levy/Mother Jones

The hand recount in Florida’s Senate race is still in progress here in Palm Beach County, but Democrats are beginning to see the writing on the wall. Though the Democratic candidates for Senate and governor, Bill Nelson and Andrew Gillum, are not expected to concede imminently, their supporters here are beginning to mourn what they now believe are two losses in races they could have won.

“This should be a wakeup call for Florida Democrats,” said one Democratic official, who asked to remain anonymous in order to speak frankly. “This election highlighted that our voters don’t understand the process.”

The feeling among Democrats here was somber after reports began to trickle in from Broward County, directly to the south, that the recount hadn’t gone their way. In Broward County, Nelson’s team was banking on the hand recount to uncover thousands of votes for Nelson that the tabulating machines hadn’t registered. But when the hand count wrapped up rapidly on Friday morning, it was clear that hadn’t happened. Of more than 30,000 ballots recounted by hand there, just 449 included a vote for a Senate candidate. (Poor ballot design put the Senate contest below a column of instructions, and many voters likely overlooked it.) That left Nelson with little chance of coming out on top through the recount. In the race for governor, Gillum trailed Republican Ron DeSantis by a slightly larger margin, so the race did not go to a hand recount, though Gillum has not yet conceded the race.

Sean Domnick, an attorney working with the Nelson campaign in Palm Beach County, wasn’t ready to give up hope. “There are clearly votes to be picked up in this recount,” he said. “Then there are lots of votes that have never been counted.” Additional ballots could come into play through legal challenges, including an order by a federal judge in Tallahassee granting about 4,000 voters an extra two days to fix signature-match issues. Another lawsuit, if Democrats prevail, would force counties to count mail-in ballots that arrived after the deadline of 7 p.m. on election night. “Let’s let the process play out,” Domnick said.

But Domnick conceded that the laws in Florida do not make it easy to vote. There’s no Election Day registration and no automatic registration, and voters have to register nearly a month before elections. Provisional ballots cast at the wrong precinct are not counted, and there are strict mail-in deadlines and signature-matching requirements. Republicans “want to make it hard to vote,” he said.

Others here were more pessimistic. Nelson trails by around 12,605 votes after the machine recount ended on Thursday, and Gillum was down 33,683 votes to DeSantis. But both margins were slim, in an election where more than 8 million people voted. Among a few local Democrats, the feeling was that the party had snatched defeat from the jaws of victory by failing to educate voters about how to register on time, vote by mail, find the right precinct, and generally make sure their ballots are counted. The Democratic official recalled watching the canvassing board in the days before the election, as it looked over provisional ballots, and vote after vote in this Democratic-leaning county was tossed for issues like failing to register on time or voting at the wrong precinct.

“Andrew Gillum turned out the vote,” said the official. But people “just didn’t know how to vote.”