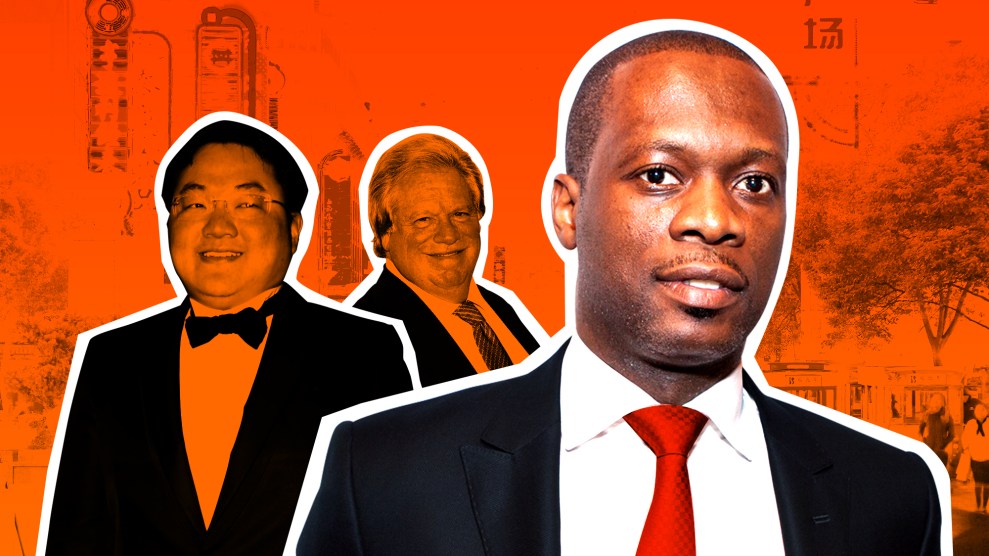 In November 2017, Mother Jones received an unusual pitch. It was a four-page memo from Pras Michel, the Grammy-winning rapper and founding member of the Fugees, proposing an article on the US government’s refusal to grant China’s request for the extradition of a prominent dissident living in New York.

“The question is why is the FBI protecting Guo Wengui—a Chinese illegal immigrant who lied on his US visa application for entry to the USA, is wanted for rape, kidnapping and a number of civil lawsuits in the millions of dollars, and has an Interpol red notice warrant out for his arrest?” Michel wrote in the memo, which he sent from a personal email account via an intermediary.

Guo, a billionaire businessman and political activist, has drawn Beijing’s ire with tweets alleging corruption by top Chinese officials, winning him sympathy in the United States. He has been accused of sexual assault by a former assistant and charged in China with corruption and other crimes, but his advocates argue that these are phony allegations ginned up to discredit him. Michel’s pitch, though, was stridently pro-China and at times bizarre. His various arguments included a claim that Guo pays FBI agents “lavishly” to protect him. “Has anyone else watched ‘Scandal’ where a major storyline is how the B613 secret spy agency actually controls and runs the government—rather than elected officials like the President?” Michel asked. “Perhaps it’s not so far off.”

The memo raised a question: Why was a celebrity entertainer pushing conspiracy theories to help the Chinese regime?

In recent days, the Justice Department offered an answer, filling in aspects of a strange and complex saga involving the rapper, a fugitive Malaysian businessman known as Jho Low, and disgraced Republican fundraiser Elliott Broidy. In court documents filed last week in US District Court in Washington, DC, prosecutors allege that Michel pushed for Guo’s extradition as part of an international scheme tied to a massive money laundering effort by corrupt Malaysian officials. The filing sought the forfeiture of more than $73 million they allege Michel helped Low fraudulently funnel into American bank accounts to pay influential political figures, including Broidy, to lobby the US government. The initial goal of this lobbying effort was to shut down a Justice Department probe into more than $700 million in funds allegedly stolen from a state development fund known as 1MDB and laundered through the United States by associates of Malaysia’s then-Prime Minister Najib Razak, who was defeated in a reelection bid this year. The effort to expel Guo allegedly arose as an offshoot of that lobbying push. Prosecutors don’t explain why the Malaysians would care about Guo, though China has bailed out the troubled Malaysian fund, reputedly gaining sway over Malaysian policy.

According to court filings, Michel helped Malaysian businessman Jho Low find “someone with political influence” to lobby for the Justice Department to end its case.

Previous reports have noted Michel and Broidy’s involvement with Low, who was indicted in federal court on money laundering and other charges in October, and on the wide-ranging 1MDB scandal. (Low’s whereabouts are presently unknown.) But the new filings by the Justice Department highlight the extent of the men’s legal exposure. Broidy appears to face a federal investigation into whether he engaged in unregistered lobbying. Michel, though not charged with a crime, is labeled a co-conspirator in the Justice Department case and his assets have been frozen.

Barry Pollack, a lawyer who represents Michel, said in an email that Michel is innocent of wrongdoing. “The government has seized assets and made allegations that have not been supported by any evidence,” Pollack maintained. “No charges have been brought against Mr. Michel. This matter should be concluded without any charges and with the return of funds that have improperly been seized.”

Michel has met in recent months with prosecutors in Washington, people familiar with the matter said. But Pollack said his client is not “cooperating” with the government because “Pras has not done anything wrong and does not have information about any wrongdoing by others.”

Low, the Malaysian businessman, allegedly capitalized on access to stolen 1MDB funds to invest in real estate, including properties in New York and Los Angeles and Hollywood projects including the Oscar-nominated film, The Wolf of Wall Street, starring Leonardo DiCaprio. In the process, Low led a high-rolling lifestyle and befriended a long list of celebrities including DiCaprio, Paris Hilton, and Michel.

By 2016, Low was under investigation by a Justice Department international corruption unit attempting to recover Malaysian funds laundered through the United States. According to court filings, Michel helped Low find “someone with political influence” to lobby for the Justice Department to end its case. That person, though not named in court filings, was Broidy, an investment fund manager and then a top GOP fundraiser, according to people familiar with the case and press reports.

Broidy agreed to try to influence a potential nominee for a federal position who would have say over the 1MDB case, but that person was not nominated, the court documents say. In June 2017, Broidy appealed to Donald Trump to set up a golf date with Najib, the Malaysian prime minister, the New York Times reported. That effort also apparently failed.

Broidy’s attorneys, who did not respond to questions this week, have said he never lobbied for Low. Still, according to prosecutors, Broidy received millions of dollars in payments from the Malaysian businessman. Prosecutors claim that Broidy told Michel that “he did not want to be linked to” Low, who was publicly identified with Malaysian scandal. Instead, they contend, the payments came through a circuitous path with Broidy eventually receiving at least $6 million in fees that were routed from companies controlled by Low to limited liability firms set up by Michel and transferred from there to the law firm of Broidy’s wife. Most of that money was then moved to other accounts that Broidy controlled, the complaint says.

Those payments appear to have gone toward an $8 million retainer prosecutors say that Broidy and Michel negotiated in April 2017. The agreement also called for Broidy to receive a $75 million success fee, nominally from a firm controlled by Michel, if the Justice Department’s 1MDB case was resolved within 180 days. Later that month, according to court filings, Michel and Higginbotham drafted an agreement under which Michel’s firm would receive a $25 million retainer from an unnamed client and an additional $300 million if the forfeiture case was successfully resolved.

Low invested in Hollywood projects, including The Wolf of Wall Street, and led a high-rolling lifestyle, befriending a long list of celebrities including Leonardo DiCaprio, Paris Hilton, and Michel.

In May 2017, Low, Michel, and Broidy, building on their efforts to stymie the Justice Department’s 1MDB case, allegedly launched another scheme: To secure Guo’s extradition. Federal prosecutors described this plan in documents filed in a related case involving a former Justice Department official named George Higginbotham, who pleaded guilty last week to participating in a conspiracy to move Low’s money into Michel’s accounts. At the time, Higginbotham worked for the Justice Department as a senior congressional affairs specialist. He left the post in August. (Michel and Low are unnamed in Higginbotham’s plea documents, but they are easily identified because their names are included in another filing related to the case. Sources familiar with the probe confirmed they are the conspirators cited in the filings.)

Higginbotham’s plea says that Michel (“co-conspirator A”) agreed to pay Broidy “and others” to “use their political connections to lobby United States government officials” to have an unnamed foreign national extradited to a foreign country. Publicly available information indicates this is a reference to Guo and China. According to the Higginbotham’s plea, at Michel’s request, he met with China’s ambassador to the United States, Cui Tiankai, and delivered a message: “United States government officials were working on” the extradition request and would soon have new information “on the logistics of returning” Guo.

A Chinese embassy official responded to several questions with a general denial of involvement. “The Chinese Ambassador and the Embassy have nothing to do with the subject of your question.”

Prosecutors say that Michel told Higginbotham the Guo scheme would be lucrative. Higginbotham’s plea says that between May and September 2017, “tens of millions of dollars” were transferred from a company controlled by Low to accounts set up by Michel. The plea materials say that Higginbotham understood that the purpose of the money was to pay Broidy and others to lobby United States government officials to resolve 1MDB matters and have Guo sent back to China.

The New York Times reported last April that Broidy had a complicated plan: He hoped to get the United Arab Emirates, where he had high level contacts, to push the Trump administration to extradite Guo to the UAE, based on a business dispute Guo had in the country. The Emiratis could then send Guo on to China. According to emails reported by the Times, Broidy hoped that both China and the UAE would pay him and his associates for executing the plan.

Court documents say that Michel and Higginbotham knew US banks would balk at accepting funds from Low, due to accusations tying him to money laundering. So they made “false and misleading” statements to officials at Morgan Stanley, City National Bank, and Citibank, prosecutors charge. The duo falsely claimed the money was for “media consulting” and came from a foreign investor in Michel’s entertainment projects, the filings allege. (Prosecutors say Michel and Higginbotham referred to Low in emails with a code name: “Wu Tang.”)

In a statement, Michel did not explain the reason for his involvement in the lobbying efforts: “I vehemently and unequivocally deny any allegations leveled against me with regard to the Department of Justice’s case against Mr. Higginbotham,” he said. “Any irresponsible speculation must stop. I have never conspired to commit any crime, nor defraud any organization, in this case or otherwise. I have not been charged. It is a shame that anyone’s name should be dragged through the mud like this, particularly another Black man who uses his voice and influence to effect change.”