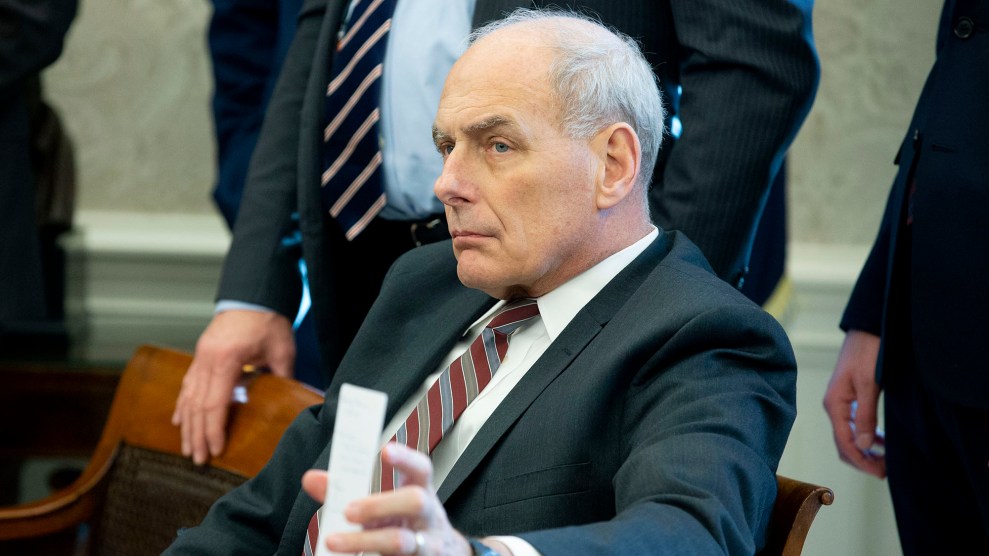 The government has been partially shut down since December 21 because President Donald Trump refuses to sign a budget unless it includes $5 billion for his border wall. But in an interview on Sunday, outgoing chief of staff John Kelly cast doubt on the president’s signature proposal, saying “To be honest, it’s not a wall.”

Kelly, as head of the Department of Homeland Security and then chief of staff, has been an instrumental figure in enforcing the president’s hardline immigration policies. But he criticized the administration’s handling of those issues in an interview with the LA Times.

As head of DHS, Kelly said he was not consulted beforehand about the administration’s disastrous Muslim ban. “I had very little opportunity to look at them,” he said. “Obviously, it brought down a greater deal of thunder on the president.”

He also blamed then-Attorney General Jeff Sessions for the administration’s widely-condemned policy of separating migrant children from their parents along the US-Mexico border. “What happened was Jeff Sessions, he was the one that instituted the zero-tolerance process on the border that resulted in both people being detained and the family separation,” Kelly said. “He surprised us.”

However, Kelly’s remarks at the end of his tenure appear to be self-serving, blaming others for policies that he supported. He aggressively defended the administration’s Muslim ban as homeland security secretary, saying “The thinking was to get it out quick so that potentially people that might be coming here to harm us would not take advantage of some period of time that they could jump on an airplane and get here.”

He also helped devise the policy of separating immigrant parents from their children, saying it would be “a tough deterrent” to migrants thinking of crossing the border.

Kelly took credit for stopping Trump from national security decisions he viewed as reckless, such as threatening to withdraw US troops from Afghanistan. “When I first took over, he was inclined to want to withdraw from Afghanistan,” Kelly said. “He was frustrated. It was a huge decision to make…and frankly there was no system at all for a lot of reasons—palace intrigue and the rest of it—when I got there.” But after Trump announced Kelly’s departure, the president abruptly decided to pull half of US troops out of Afghanistan and all of them out of Syria, which led Defense Secretary James Mattis to resign.

Though Kelly paints yet another picture of a dysfunctional and fractious White House, other top Trump aides have been far more critical of the president. Kelly said Trump had never ordered him to do anything illegal and, if he had, he would have resigned. But other top administration officials said that Trump had routinely attempted to circumvent the law.

“So often, the president would say, ‘Here’s what I want to do, and here’s how I want to do it,’” former Secretary of State Rex Tillerson said in early December, “and I would have to say to him, ‘Mr. President, I understand what you want to do, but you can’t do it that way. It violates the law.’”