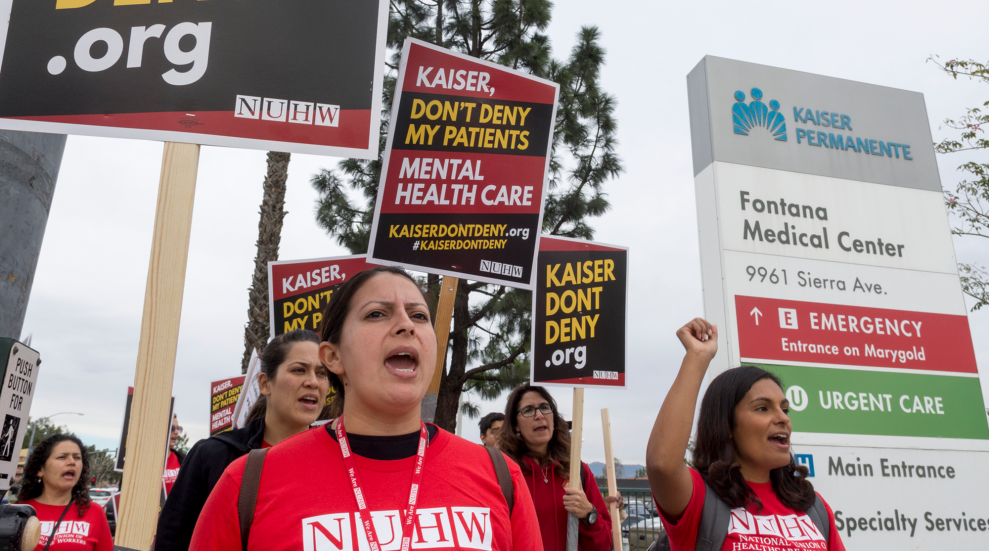 In the spring of 2012, Susan Futterman begged the clinicians at Kaiser Permanente in California to change her husband’s treatment. Fred Paroutaud, who at 57 years old was experiencing delusions and bouts of mania, had never experimented with drugs. But after he was released from a 72-hour detention in a psychiatric facility, Futterman says Kaiser gave him a low-dose anti-psychotic and told him to attend group therapy for substance users. Kaiser “told me they didn’t provide individual therapy,” Futterman remembers.

“There is not a single state in this country that provides sufficient mental health services.”

When Paroutaud started becoming increasingly detached and depressed, Futterman got worried. “I was calling Kaiser every day multiple times a day and I couldn’t get through to anyone,” Futterman told me through tears. “It turned out that his psychiatrist was on vacation, and they didn’t have a policy of covering for each other, so there was no doctor I could talk to.” Paroutaud hanged himself in their home days later.

Futterman says that even while it was happening, it was obvious to her the group therapy wasn’t cutting it—Paroutaud needed individualized, one-on-one attention. That’s why in 2013 she signed on to a lawsuit alleging that Kaiser violated a California law, called the Mental Health Parity Act, that requires health care insurers to cover all treatments for certain severe mental health illnesses, like bipolar disorder and schizophrenia. But nearly six years later, Futterman’s lawsuit is still in the works. And last week, 4,000 Kaiser mental health clinicians went on strike as part of a yearslong battle with their employer over investments in mental health care. According to those clinicians, serious problems persist at the country’s largest integrated health system.

But in its paltry mental health offerings, Kaiser is anything but unique. Despite the passage of the federal Mental Health Parity and Addictions Equity Act in 2008, which barred insurers from discriminating against mental health issues in coverage plans, and the subsequent enactment of mental health coverage protections in all 50 states, serious and pervasive gaps persist in mental health care coverage and access nationwide. According to a 2017 report by the National Alliance on Mental Illness, nearly half of the 60 million people with mental health conditions received no treatment. Of those that did, over a quarter of people seeking a therapist went out of network, and thus paid out of pocket, for their care, compared with just 7 percent of people looking for a medical specialist. And according to an analysis of two large databases of insurance claims data, primary care providers were reimbursed as much as 22 percent more for office visits than behavioral health providers, in turn pushing providers toward private practice, which can cost hundreds of dollars per hour.

“The impression everyone had after Parity passed was that mental health benefits would be easier to get,” says Bethany Lilly, deputy director of policy and legal advocacy at the Bazelon Center for Mental Health Law. But, Lilly says, “there is not a single state in this country that provides sufficient mental health services.”

In fact, in October, a handful of groups, including two led by former US Surgeon General David Satcher and former Rep. Patrick Kennedy, author of the federal parity law, graded each state based on the extent to which its parity statute ensures access to treatment. The researchers looked at, for example, whether the law requires the state’s insurance department to submit reports on its monitoring of parity compliance, and whether insurers themselves are required to demonstrate compliance to the state. Only Illinois received an “A” grade; six states—Alabama, Colorado, Maine, New Hampshire, Tennessee, and Virginia—received C grades. The rest got either a D or an F, according to the analysis.

And Kaiser of California—a state that received an F—shows what those failing grades look like in practice. In 2011, mental health clinicians at the $3.8 billion provider organization filed a 35-page complaint with the state Department of Managed Health Care (DHMC) alleging, among other things, that patients were frequently unable to get mental health appointments within the state-mandated 10 days of their request. The DMHC agreed, and in 2013 fined Kaiser $4 million—the second-largest fine against an insurer in state history—and issued a cease and desist order directing it to stop violating state parity statutes. But agency reviews of the organization in 2015 and 2017 found that serious timeliness issues remained: Patients’ wait times for initial appointments had improved slightly at some locations, but follow-up sessions for individual counseling were often booked out months in advance. In July 2017, Kaiser and the state agreed that Kaiser would work with an outside monitor to ensure compliance until 2020.

“Until plans start thinking about it as something that is just as common and important as cancer or heart disease care, it’s going to be hard for them to change their behavior.”

The Kaiser clinicians I spoke to, who are unionized and currently in the middle of contract negotiations, say the same problems persist. Ann Rivello, a licensed clinical social worker with 20 years of experience working with mentally ill patients, says her schedule is so booked up with group therapy and intake appointments that her patients have to wait a month or more for a follow-up one-on-one appointment. “We got into this work because we want to help people,” Rivello says. “We’re good clinicians. But it’s really hard to build rapport when I tell someone I can’t see them for another month. People get discouraged that the wait is so long” and never come back.

Even though Kaiser says it has hired more clinicians, Rivello says half of the therapists in the Redwood City office where she works left last year; plus, the number of new patients, at least in northern California, has kept pace with hiring. (In an email to Mother Jones, Kaiser Vice President of Communications John Nelson said that statewide, the organization has increased the number of mental health professionals by about 30 percent. Meanwhile, the overall number of patients in California has increased by 19 percent.) Osun Yoo, a marriage and family therapist, started working at Kaiser in 2016 after years working at psychiatric facilities in two northern California jails. She left her work at the correctional facilities in search of more work-life balance, but she’s found the situation worse at Kaiser—many of her coworkers, she says, don’t take lunch or bathroom breaks. And she’s booked a month and a half out, meaning her patients have to wait more than a month to see her a second time.

Nelson says Kaiser is “proud of the work” done by its mental health professionals, and points to the advancements the organization has made in health care delivery, like its increasing use of “televisits” to meet patients where they are.

The advocates I spoke to all emphasized that the intractable problems plaguing mental health care access are unique to the field—it’s hard to imagine that diabetes patients, for example, are regularly turned away from timely and life-saving check-ups. The reason? Stigma. “Plans for decades considered mental health and substance use care to be a character flaw, not something that was part and parcel of our health care delivery system,” says Angela Kimball, national director of advocacy and public policy at NAMI. “Until plans start thinking about it as something that is just as common and important as cancer or heart disease care, it’s going to be hard for them to change their behavior.”

“I felt that the system had failed him incredibly badly, and there was nothing I could do to help him.”

Some states have found ways to tackle parity issues head-on. In 2013, following a growing number of complaints from people being denied mental health care coverage, the New York attorney general’s office launched an industry-wide investigation of insurers’ compliance with state and federal parity statutes. According to a 2018 report on the investigations, the state AG has entered into eight settlement agreements with seven insurers, resulting in $2 million in restitution to patients, sweeping reforms, and a 60 percent decrease in consumer complaints to the office’s health care bureau helpline. New York is “the only state that’s done that,” says former Sen. Patrick Kennedy, whose group, the Kennedy Forum, is organizing parity campaigns across the country. “It’s hard for me to believe that the only people who are being discriminated against all reside within the boundaries of New York, so that means you’ve got the rest of the 49 states with pretty dramatic discrimination and no one’s taking these insurance companies on.”

Without their attorney general’s force, clinicians in California are doing their best to meet their patients where they are. And for her part, Susan Futterman has found her own way to help other families avoid what she went through: Shortly after losing her husband, Futterman went back to school and became a licensed therapist focusing on suicidal ideation. She says she sometimes sees patients who have struggled to get an appointment at Kaiser.

“I felt that the system had failed him incredibly badly, and there was nothing I could do to help him,” she says. “But I thought maybe I could help other people who would otherwise be failed by the medical system. I wanted to do something in his memory, and this was the best I could come up with.”