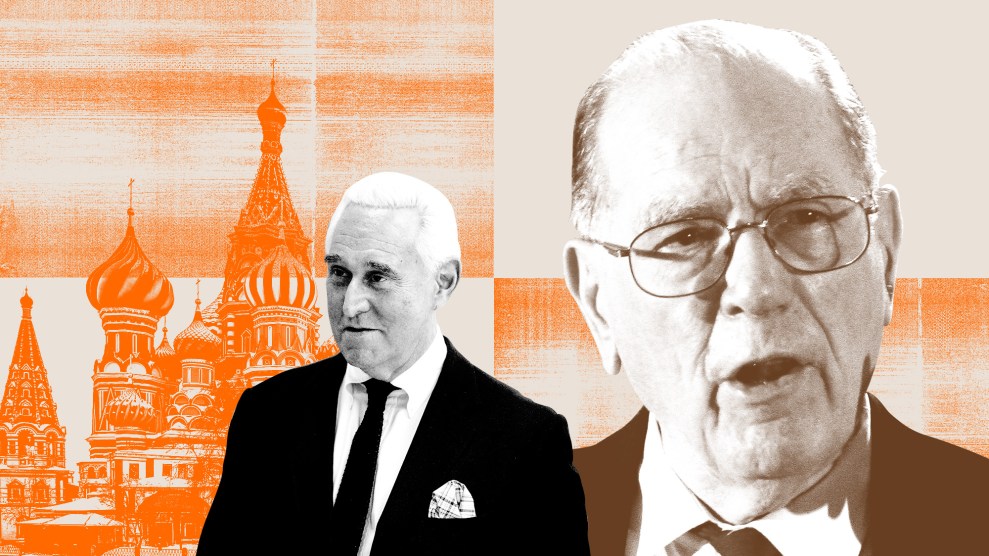 Eleven days after President Donald Trump’s election, Roger Stone, a longtime self-proclaimed GOP dirty trickster and Trump adviser, invited an unusual guest on his short-lived radio show, Stone Cold Truth, and began the interview with a question about former President Bill Clinton. “Well, I think the question of Bill Clinton is sometimes confused. Bill was framed,” Lyndon LaRouche replied. “And he was framed by the Queen of England.”

It was typical fare from LaRouche, the 96-year-old leader of a fascist political cult group that has long pitched a variety of dark conspiracy theories, including his pet notion that a Zionist British aristocratic oligarchy secretly orchestrates world events. The queen has long been a favored villain of LaRouche, who has claimed she presides over the international narcotics trade. He has also accused Henry Kissinger of being a Soviet double agent, and has led a campaign for opera to be sung at a lower pitch. While LaRouche’s followers and their wild ideas have been a sideshow for five decades—as they have distributed leaflets and crashed political events—he earned surprising prominence in the 1970s and 1980s, before a 1988 federal conviction for mail fraud sent him to prison for five years.

“Totally unproven charges of Russian collusion are a smokescreen.”

Stone’s recent association with LaRouche is consistent with his decades-long evolution from a mainstream GOP operative to an advocate and ally of the conspiratorial and political fringe. Stone is reportedly being investigated by special counsel Robert Mueller, who is examining his possible interactions during the 2016 campaign with WikiLeaks ahead of its releases of emails stolen by Russian government hackers. (Mueller himself is no stranger to LaRouche; he was a key player in the 1980s investigation that sent LaRouche to jail.) Despite all the scrutiny over Stone’s role in the 2016 campaign, his alignment with a political group that the Heritage Foundation once described as a “strange asset for the KGB’s disinformation effort” remains a little-examined aspect of his recent activities.

Also under-examined has been a tantalizing clue about possible ties between LaRouche’s organization and Moscow. Buried in Christopher Steele’s dossier on Trump’s possible links to Russia was an August 2016 report with this allegation: A “Kremlin official involved in US relations” had claimed that Russia facilitated a LaRouche delegation’s trip to Moscow, offering members of LaRouche’s group assistance and enlisting them in an effort to disseminate “compromising information” as part of the Kremlin’s 2016 influence campaign. A lawyer with ties to both Stone and LaRouche’s network has claimed that he introduced Stone to a key LaRouche aide in early 2016, as Trump began to secure the Republican nomination.

While Stone’s interactions with the LaRouche crowd may at first blush seem bizarre, Stone himself has long been a conspiracy theorist. In 2014, he published a book claiming that Lyndon B. Johnson was behind the assassination of John F. Kennedy. And in recent years, he has forged a political alliance with Alex Jones, the chieftain of Infowars who has peddled noxious conspiracy theories, including the claim that the 2012 Newtown massacre was a hoax.

This July, Stone delivered a video address to a LaRouche gathering in Germany, where LaRouche, who is in declining health, and his wife, Helga Zepp-LaRouche, now live. Stone seemed eager to embrace LaRouche and win over the crowd, recounting how he had “evolved” to embrace the “extraordinary and prophetic thinking” of LaRouche. Stone said he first met LaRouche in New Hampshire in 1980 during one of LaRouche’s many failed presidential campaigns, while Stone was working as an aide to Ronald Reagan. Noting he was a more “conventional conservative” at the time, Stone remarked that he then believed that “Dr. LaRouche’s views were somewhat exotic.”

Steele’s dossier includes talk of a LaRouche delegation to Moscow.

Stone spent a significant portion of his speech railing against Mueller’s inquiry. “The entire Russiagate investigation, the totally unproven charges of Russian collusion, are a smokescreen,” he claimed. Mimicking LaRouche’s Anglophobia, he asserted that “the role of British intelligence in all of this cannot be underestimated.”

Stone’s warm tone that day belied a more tangled history with LaRouche’s organization. In the 1980s, LaRouche went after Stone’s friend and mentor Roy Cohn, a powerful New York attorney and political fixer who represented a neighborhood paper investigating the LaRouche organization. According to Lyndon LaRouche and the New American Fascism, journalist Dennis King’s definitive account of the organization, Cohn’s vengeful ex-lover, with guidance from LaRouche’s camp, reached out to Stone and other Cohn associates seeking compromising information. When Cohn’s ex was later charged with harassment as part of the scheme, Stone wrote to the judge requesting a harsh sentence.

The LaRouche organization until recently had a similarly antagonistic relationship with Trump, regarding him as a symbol of the corrupt financial establishment and disdaining him for his own close relationship with Cohn. “Don’t be a chump for Trump,” went a piano-backed political ditty released by LaRouche’s organization in February 2016. “He’s a festering pustule on Satan’s rump!”

The group’s historic use of extreme—and immature—rhetoric and its ever-shifting ideologies and priorities have for decades fed a healthy debate over how seriously to take LaRouche. (“A Menace or Just a Crank?” read a 1989 New York Times review of King’s book.) But the organization’s longevity has made it impossible to entirely dismiss. LaRouche initially culled supporters in the late 1960s from leftist student radicals at Columbia University who were drawn to his theories and Marxist orientation. As LaRouche’s fascist views became apparent, his paranoia and controlling behavior drove the organization into cult territory. A 1974 New York Times investigation detailed bizarre and disturbing brainwashing episodes—one follower was held hostage in her apartment, another endured so-called deprogramming to the point of weeping and vomiting.

Despite such troubling revelations, LaRouche’s followers expanded his network across the globe, cultivating relationships to reach influential figures. Those efforts landed some startling successes. LaRouche met with Indian prime minister Indira Gandhi in 1981 and Mexican president Jose Lopez Portillo in 1982. His group ran scores of candidates for public office in Europe and Australia. In the United States, something of a high watermark came in 1986 when LaRouche followers won Illinois Democratic primaries for secretary of state and lieutenant governor. LaRouche himself undertook eight no-hope presidential runs between 1976 and 2004.

LaRouche parlayed his global network into a private intelligence agency that sometimes brought in revenue from corporations and other clients and even earned it entrée to the national security community. LaRouche’s intelligence operatives enjoyed a cozy relationship with members of the Reagan administration. In a 1985 Washington Post story, Norman Bailey, a Reagan National Security Council staffer, recounted meeting with LaRouche organization members numerous times—and with LaRouche himself three times. Bailey described LaRouche’s group as “one of the best private intelligence services in the world.”

Some of the intelligence was so sensitive that some US officials, including senior leadership at the Defense Intelligence Agency, suspected it came from the Soviets or another government, according to the Post. “LaRouche’s connections with Russia go back to the ’70s and ’80s,” says British journalist Matthew Sweet, whose 2018 book, Operation Chaos, chronicled Vietnam deserters who joined LaRouche’s group. “There was a time when his organization had excellent relationships with senior Russian intelligence officers,” Sweet says, including an official responsible for infiltrating sleeper agents into the United States. According to King, LaRouche activists have maintained close contacts with top advisers to Vladimir Putin, “whom LaRouche and his followers have long praised.”

“I have a back channel to Trump.”

It’s unclear what exactly triggered Stone’s recent association with LaRouche. (Stone refused a request for comment.) But Houston-based attorney Douglas Caddy claims that Harley Schlanger, a key LaRouche associate, asked for an introduction to Stone in January 2016, knowing the two were acquainted. Caddy, who is best known for briefly representing some of the Watergate burglars, has written that he first met Stone in 1975 when the two were involved in the National Conservative Political Action Committee. When Stone wrote his book alleging LBJ was behind the Kennedy assassination, he thanked Caddy, an active participant in online conspiracy forums, for providing him documents. Caddy has his own links to the LaRouche network: In 2014 he appeared on a radio show hosted by Schlanger, and also signed a public petition organized by a LaRouche group.

Caddy maintains that the alleged Stone-Schlanger connection ought to be of interest to Mueller and other investigators probing Russia’s role in the 2016 election. In his recently published memoir—in which Caddy suggests JFK may have been killed to prevent him from revealing proof of extraterrestrial life—he details his interactions with Stone and Schlanger and reprints what he says is an email he received from Stone in early 2016: “Thanks for connecting me with Harley Schlanger—he is a great guy and shares our goals. I think we hit it off. I have a back channel to Trump and we are fighting the globalists.”