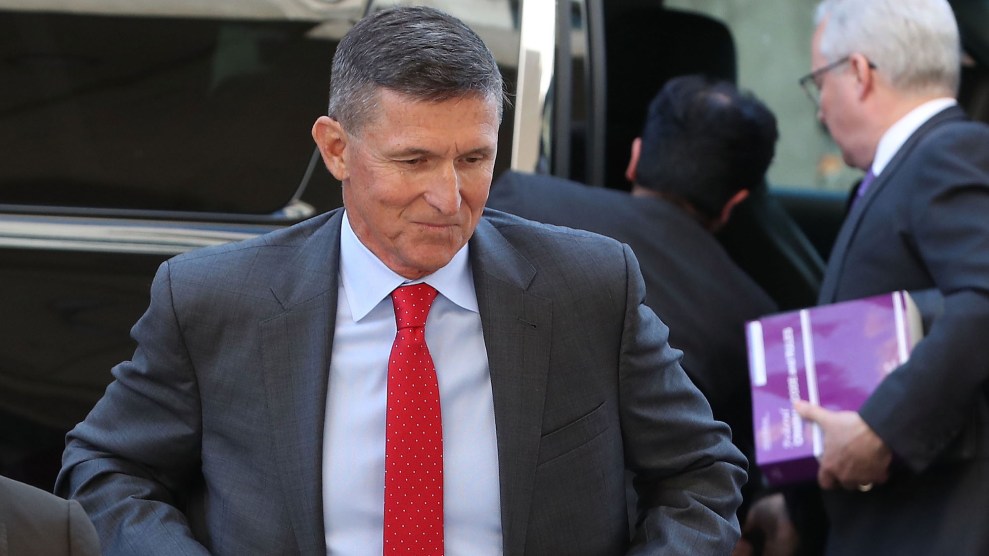 Michael Flynn, President Donald Trump’s former national security adviser, has provided valuable cooperation to prosecutors investigating possible coordination between the Trump campaign and Russia, special counsel Robert Mueller said Tuesday in a filing recommending a light sentence for Flynn. “Given the defendant’s substantial assistance and other considerations,” prosecutors write, “a sentence at the low end of the guideline range—including a sentence that does not impose a term of incarceration—is appropriate and warranted.”

Flynn is scheduled to be sentenced on December 18.

Mueller’s sentencing memo on Flynn was much-awaited by Trump-Russia watchers. Flynn was the first high-level Trump ally to plead guilty in the scandal and the first to complete his cooperation. In an addendum to the filing, prosecutors say that Flynn’s “early cooperation…likely affected the decisions of other firsthand witnesses to be forthcoming with the [special counsel] and cooperate.”

The addendum is heavily redacted. Prosecutors say that is because it includes sensitive information about ongoing investigations. Some of the benefit of Flynn’s help “may not be fully realized at this time because the investigations in which he has provided assistance are ongoing” they say. But the document contains intriguing nuggets. It says that Flynn participated in 19 interviews with the special counsel’s office or attorneys from other Justice Department offices, and assisted with “several ongoing investigations” including a criminal probe separate from Mueller’s main investigation. “The defendant has also assisted with the [special counsel] investigation concerning links or coordination between the Russian government and individuals associated with the Trump campaign,” it adds.

Flynn pleaded guilty last year to lying to FBI agents about his contacts with then-Russian Ambassador Sergey Kislyak. As part of his plea, Flynn also admitted to making false statements to the Justice Department regarding work his company, the Flynn Intel Group, did for the Turkish government.

What’s next for Flynn after a potential prison stint? Maybe more lobbying. In July, two lobbyists known for their work for Qatar, Nick Muzin, a former staffer for Sen. Ted Cruz (R-Texas), and Joey Allaham, the ex-owner of several kosher steakhouses in New York, announced that Flynn would join a lobbying consulting firm, Stonington Global LLC, that they launched. That plan was nixed by Flynn’s lawyers. Sources said Mueller’s team had not been told of Flynn’s new venture, and Flynn’s lawyers feared they would react negatively to the plan. But Allaham and Muzin say they still anticipate Flynn joining the firm after he completes his sentence.

*This is a developing story

Read the sentencing memo and the addendum: