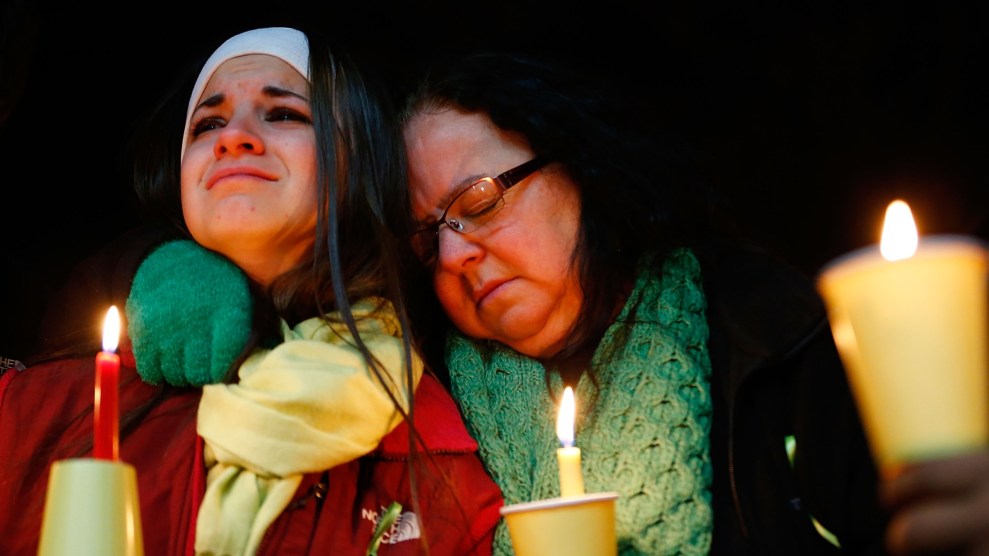 A Sandy Hook memorial in Connecticut in December 2012Jared Wickerham/Getty

Adam Lanza, who fatally shot his own mother and then 20 first-graders and six staff members at Sandy Hook Elementary School in Connecticut, was intelligent, prone to isolation, preoccupied with ideas of mass murder, and felt intense contempt for others. These facts and others came to light soon after the massacre in December 2012, but the scope of Lanza’s profound personal problems remained partially obscured from the public, with a cache of investigative records remaining sealed.

On Sunday, the Hartford Courant published details from more than 1,000 pages of documents from the Connecticut State Police related to Lanza and his attack, which the newspaper obtained after a five-year legal battle to make them public. Among the documents were Lanza’s writings, education records, and psychiatric reports about the troubled young man, who was 20 years old when he carried out the mass murder and then committed suicide at the scene.

As the Courant notes about the documents:

Diagnosed as a child with a sensory disorder and delays in speech, [Lanza] would exhibit a quick mind for science, computers, math, and language. The few acquaintances he had as a teenager came from video game arcades and online gaming chatrooms. The newly released writings express a wide range of emotions and rigid doctrine, from a crippling aversion to the dropped towel, food mixing on his plate and the feel of a metal door handle, to a deep disdain for relationships, an intolerance of his peers, a chilling contempt for anyone carrying a few extra pounds, and a conviction that certain aspects of living are worse than death.

The documents included a screenplay Lanza wrote about a pedophiliac relationship between a grown man and a 10-year-old boy and a list of 35 reasons people should hate food and fat people. (Some experts have speculated that Lanza’s “extreme anorexia”—he was severely underweight at the time of the shooting—contributed to his mental state.)

One standout document was an extensive spreadsheet Lanza had created detailing 400 cases of mass violence dating back to 1786. The Courant noted the attention to detail in Lanza’s spreadsheet (which the paper did not publish): He divided the document into 17 categories, sorted by the number of people killed in each incident. In online chats, Lanza implied he had been working on research for the spreadsheet as early as 2006, although he stopped adding to it in June 2010, about two and a half years before the Sandy Hook shooting. Most of the incidents Lanza included involved attacks using guns.

How much detail to make public about mass shooters has become a subject of growing debate. Since 2015, Mother Jones has documented the rise of so-called copycat mass shootings, or attacks inspired in some part by previous ones. A Mother Jones investigation into the influence of the mass shooting at Columbine High School found that the high-profile attack in Colorado in 1999 inspired perpetrators of at least 74 subsequent plots and attacks across the country. As my colleague Mark Follman wrote in 2015 about the phenomenon:

To a much greater degree than is generally understood, there’s strong evidence of a copycat effect rippling through many cases, both among mass shooters and those aspiring to kill. Perpetrators and plotters look to past attacks for not only inspiration but operational details, in hopes of causing even greater carnage.

When I asked threat assessment experts what might explain the recent rise in gun rampages, I heard the same two words over and over: social media. Although there is no definitive research yet, widespread anecdotal evidence suggests that the speed at which social media bombards us with memes and images exacerbates the copycat effect.

The Courant notes that Lanza didn’t indicate a preference for any particular mass attack in his spreadsheet, and it is unclear whether he used it for any specific reason, according to former FBI profiler Mary Ellen O’Toole. “He’s interested in mass shootings,” she told the Courant, “now did he use this research to develop his own plan and his own strategy? It’s certainly possible.”

Some Sandy Hook survivors took issue with the Courant‘s decision to publicize details from the documents. “You guys absolutely suck for releasing this now,” tweeted Nelba Márquez-Greene, whose daughter died in the attack, of the Courant‘s decision to write about the documents only a few days before the anniversary of the shooting. She also said, “While certainly the details of this and other crime can help inform response and possibly even help to prevent tragedy in the future, the timing of this makes it nothing but click bait. Remember the families: http://mysandyhookfamily.org.”