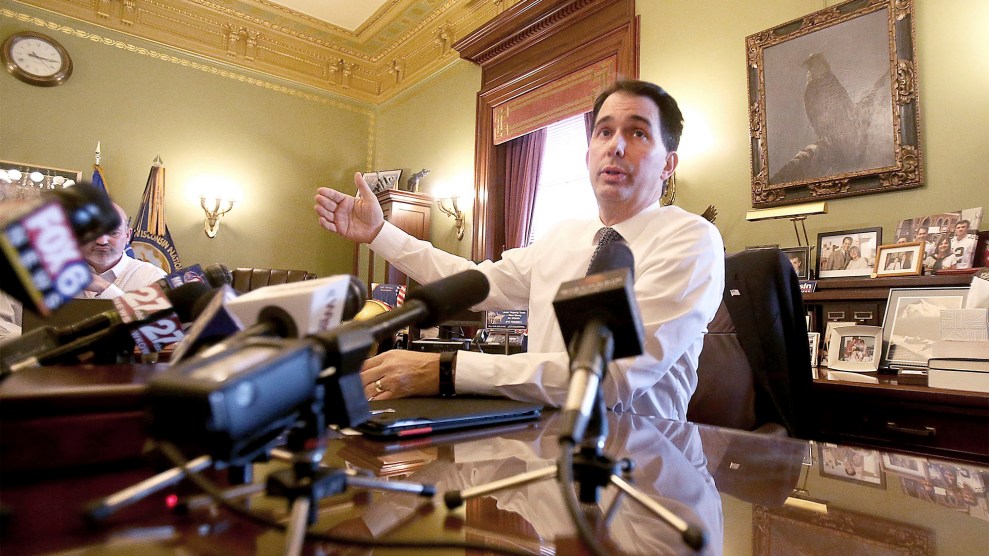 The bills approved by Walker, which were passed by the state’s Republican-controlled Legislature on December 5 in a lame-duck session that was widely denounced as a legislative coup, limits the ability of incoming Democratic Gov. Tony Evers to make administrative changes to state laws and prohibits the governor from making key legislative appointments. It also prevents incoming Democratic Attorney General Josh Kaul from withdrawing from federal lawsuits initiated by the state without legislative approval, likely blocking Kaul from removing Wisconsin from a multi-state lawsuit challenging the Affordable Care Act.

“This will no doubt be his legacy. The people demanded a change on November 6th, and they asked us to solve problems, not pick petty, political fights.”

One of the bills signed by Walker also limits Wisconsin’s early voting period to two weeks. Currently, Wisconsin counties can decide when to begin early voting, and Democratic-leaning cities like Madison and Milwaukee allowed six weeks of early voting in 2018, which helped lead to record turnout for a midterm election. Democrats have already pledged to sue, noting that the last time Wisconsin cut early voting, in 2014, a federal court struck the law down and said it was intended to “suppress the reliably Democratic vote of Milwaukee’s African Americans.”

Wisconsin’s Republican leaders have essentially admitted the legislation was passed to target Democratic strongholds. “If you took Madison and Milwaukee out of the state election formula, we would have a clear majority,” said Assembly Speaker Robin Vos.

Walker previously criticized lame-duck legislative sessions, urging outgoing Democratic Gov. Jim Doyle in December 2010 not to approve new union contracts before he took office. But he changed his tune after Wisconsin Republicans decided to hamstring Walker’s Democratic successor. At a press conference in Green Bay on Friday, he dismissed concerns about the lame-duck bills as “hype and hysteria.”

“Today, Governor Walker chose to ignore and override the will of the people of Wisconsin,” Evers said in a statement Friday. “This will no doubt be his legacy. The people demanded a change on November 6th, and they asked us to solve problems, not pick petty, political fights.” Incoming Democratic Lieutenant Gov. Mandela Barnes also attacked Walker’s decision on Twitter.

The lame duck session was whiny and hypocritical. Signing the bills was just salty.

Republicans have undertaken similar efforts to undermine Democratic power and restrict access to the ballot in lame-duck sessions in other key swing states like Michigan and North Carolina. Michigan’s Republican-controlled Legislature is considering a series of bills that would strip power from the state’s incoming Democratic governor, secretary of state, and attorney general. And in North Carolina, where Republicans first took away power from the Democratic governor in a lame-duck session in 2016, the GOP Legislature swiftly passed a new voter ID law before Republicans lose their supermajority next month.

This is outrageous abuse of power & should be huge national scandal pic.twitter.com/WK71x3DaU3

Walker’s tenure as governor has been defined by efforts to undermine democracy in Wisconsin and weaken Democratic power. His signature initiative stripped public-employee unions of collective-bargaining rights and severely weakened one of the Democratic Party’s most important allies. He signed redistricting plans passed by Wisconsin Republicans in 2011 that are among the most gerrymandered in the country: Republican assembly candidates received 46 percent of statewide votes in 2018 but retained 64 percent of legislative seats. Walker strongly supported a voter ID law that disenfranchised tens of thousands of disproportionately Democratic-leaning voters and helped President Donald Trump carry the state. And he oversaw the gutting of Wisconsin’s campaign-finance system, which before Walker took office was regarded as one of the strongest in the country at preventing corruption.

“Wisconsin is turning into Hungary on the Great Lakes,” New York Times columnist Paul Krugman wrote December 10, “a state that may hold elections, but where elections don’t matter, because the ruling party retains control no matter what voters do.”