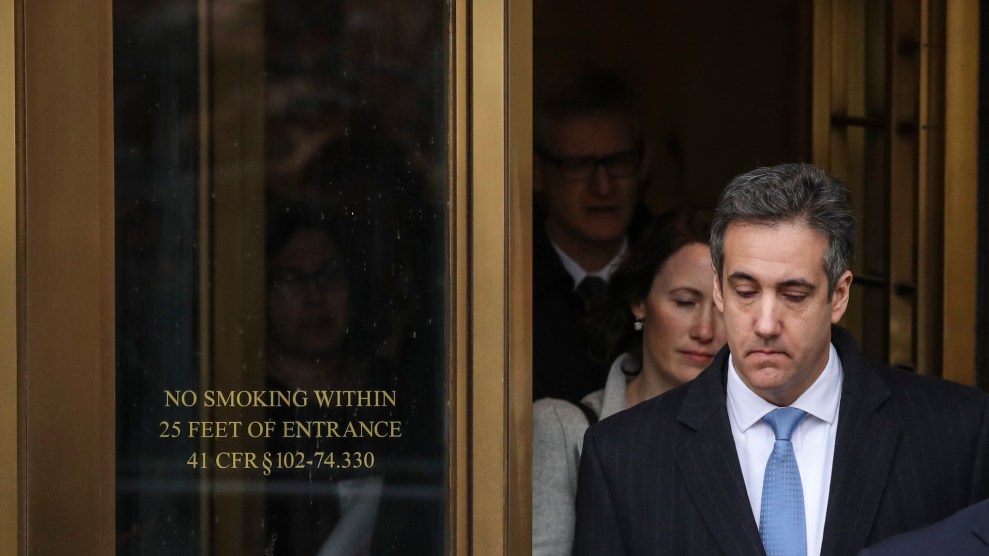 Michael Cohen, the former personal lawyer and fixer for President Donald Trump, received a three-year prison sentence Wednesday after pleading guilty to crimes including the violation of campaign finance laws. But sending the president’s longtime lawyer to jail for helping Trump pay hush money to two women before the 2016 presidential election wasn’t even the biggest legal blow landed by prosecutors from the Southern District of New York.

In a release announcing Cohen’s sentence, the prosecutors included some additional news: The US Attorney’s office “previously reached a non-prosecution agreement” with American Media Inc., the parent company of the National Enquirer, under which the firm “admitted that it made the $150,000 payment in concert with a candidate’s presidential campaign, and in order to ensure that [a] woman did not publicize damaging allegations about the candidate before the 2016 presidential election.”

And the announcement included a line that ought to worry Trump: “AMI further admitted that its principal purpose in making the payment was to suppress the woman’s story so as to prevent it from influencing the election.”

In addition to admitting paying $130,000 to adult film star Stormy Daniels, Cohen pleaded guilty in August to working with AMI to pay $150,000 to former Playboy model Karen McDougal, who also said she had extramarital sex with Trump, so as to buy and bury McDougal’s story. In a court filing Friday, prosecutors said that in both cases, Cohen acted “at the direction of” Trump.

The newly disclosed admission by AMI bolsters prosecutors’ position by undercutting Trump’s latest version of a defense: He now says he okayed payments to the women to hide his alleged affairs from his family, not to help his presidential campaign. If the payments weren’t meant to help his campaign, the argument goes, then they weren’t in-kind campaign contributions and therefore were legal. Trump said in a tweet Monday that these payments were “a simple private transaction,” and not a “campaign contribution.”

“Democrats can’t find a Smocking Gun tying the Trump campaign to Russia after James Comey’s testimony. No Smocking Gun…No Collusion.” @FoxNews That’s because there was NO COLLUSION. So now the Dems go to a simple private transaction, wrongly call it a campaign contribution,…

This is what has become known as “the Edwards defense.” In 2012, former North Carolina senator and Democratic vice presidential nominee John Edwards escaped conviction after arranging hush payments to a pregnant mistress; he made the payments while he was running for president in 2008, arguing successfully in court that they were aimed at hiding his conduct from his ailing wife, not from voters.

Trump can still claim he viewed the hush payments as personal—but prosecutors advertised on Wednesday that his alleged co-conspirators have provided evidence they viewed the payments as motivated by winning the election. Even if the prosecutors are unwilling to indict Trump while he is president, the release suggests they are building a compelling legal case against him.

“One by one, the career DOJ prosecutors are removing possible Trump defenses,” former Solicitor General Neil Katyal tweeted Wednesday. “Now it isn’t just Cohen, but also AMI, saying these hush money payments were made to influence the 2016 Presidential election, and knock out the so-called ‘Edwards defense.’”

Arguing Wednesday for Cohen to receive prison time, Assistant US Attorney Nicolas Roos said in court that Cohen’s campaign finance violations “eroded faith in the electoral process and compromised the rule of law.”