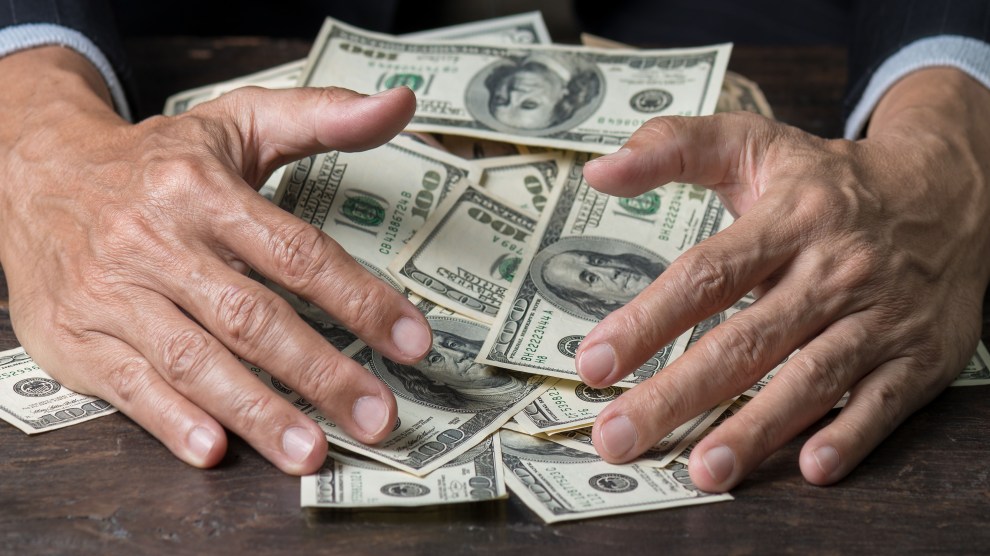 One year ago today, President Donald Trump signed into law the largest tax overhaul America had seen in 30 years. In an Oval Office signing ceremony just a few days before Christmas 2017, a festive Trump called the Tax Cuts and Jobs Act the “biggest tax cut…of all time” and vowed the law’s boon for companies would trickle down to regular Americans as CEOs invested in bonuses, raises, expansions, and hiring.

“I consider this very much a bill for the middle class, a bill for jobs,” the president said.

But in the year since the GOP Congress helped Trump push through his $1.5 trillion in cuts in less than two months, businesses have not, as promised, overwhelmingly given their extra profits back to the people. Instead, they’ve saved billions in taxes, using the money for stock buybacks aimed at further enriching the company’s executives and shareholders, driven the federal debt to a level unseen since the years immediately after the Great Recession, and overwhelmingly kept any plans for spending their massive tax savings a secret. Here’s a glimpse at what’s unfolded over the past year:

The full scope of the tax bill’s effects on corporate tax savings won’t be known until early next year, when companies file 2018 annual reports with the Securities and Exchange Commission. But their quarterly reports from the last nine months already make clear that companies are saving billions.

The 2017 tax bill cut the corporate tax rate from 35 to 21 percent, handing a remarkable tax savings to some of the biggest and wealthiest companies in the United States. In just the first three months of 2018, about 180 of the companies in the S&P 500—including Google, Verizon, and Wells Fargo—saved $13 billion on their taxes. Alphabet, Google’s parent company, alone saved about $1 billion in that first quarter. Second and third quarter reports from companies showed the same thing: billions in tax savings.

Some of these savings also came from a “repatriation holiday” for corporate profits earned abroad. The new tax law ended the practice of taxing companies on profits earned overseas at the same rate as money earned in the United States. Supporters said this would encourage companies to reinvest into their American business and the US economy, rather than parking money in tax havens. Under the new law, companies with loads of money stored overseas were rewarded with yet another big tax break: the right to claim foreign profits in the United States by paying a one-time tax at a discounted rate—15.5 percent on cash and 8 percent on other assets. Companies have taken advantage of the holiday, bringing back $305 billion in just the first quarter of 2018 alone. But the pattern has tapered off significantly since then as companies have finished taking advantage of the one-time discount.

On top of this, the tax bill’s new deduction for pass-through entities—companies that are sole proprietorships—will save American millionaires an estimated $17 billion in 2018.

Companies are investing their savings in their executives and shareholders, not their workers

The massive tax savings, while noteworthy, aren’t unexpected. Supporters of the tax bill, including the president, claimed the money would give companies leeway to invest in existing workers and expansion plans. But data collected by a mix of financial firms, think tanks, and the federal government show that’s not quite what’s happening: Companies are directing their tax savings to their ultrawealthy executives by way of stock buybacks—a practice where companies purchase their own shares, driving up their value and thereby enriching their own shareholders. (The practice was illegal until the Reagan administration.) According to data maintained by the left-leaning Americans for Tax Fairness, companies have spent 128 times more on buybacks than on wage hikes or bonuses. This year stock buybacks surpassed $1 trillion for the first time ever, soaring past the previous annual record, set in 2015, of $781 billion, according to investment research firm TrimTabs, which closely tracks corporate stock purchases.

The surge in buybacks comes with an “opportunity cost,” says Matthew Gardner, a senior fellow at the Institute on Taxation and Economic Policy. “You can’t spend money on things like job creation or increasing manufacturing capacity when you’re spending it on buybacks. It is a zero-sum game,” Gardner says. “Stock buybacks aren’t achieving things the American economy most desperately needs. They are simply rewarding a segment of the population that is already well-off and cash-rich.”

A July 2018 report from the Roosevelt Institute and the National Employment Law Project found that the restaurant, retail, and food manufacturing industries spent enormous sums on buybacks. The restaurant industry spent more than it made in profits, resorting to using debt and cash reserves to buy back even more stock and enrich its shareholders. If these industries had reinvested this money into their workers instead, the study found, workers at Lowe’s, CVS, and The Home Depot could have gotten raises of at least $18,000 a year.

What’s more, some corporations have actually shrunk their workforce since the passage of the tax bill. In November, General Motors announced thousands of layoffs, even after saving hundreds of millions of dollars in taxes. This month, the Charlotte Observer reported that Wells Fargo, which has announced plans for more than $24 billion in stock buybacks, has laid off hundreds of workers and sent their jobs abroad.

After Trump signed the tax bill into law, several hundred large corporations rushed out press releases boasting of plans to reinvest part of their tax savings into their workforce. Many companies gave workers a one-time $1,000 bonus, while a few firms, including BB&T and PNC Financial, pledged to raise minimum pay to $15 an hour.

But the vast majority of companies kept mum. For those that made public boasts, the spending represented only a portion of their total tax savings, and they’ve been quiet about how they’re spending the rest.

“From most companies, all we have gotten are these splashy announcements when companies decide to give a wage boost,” Gardner says.

Of the 145 or so companies who have made their intentions public, 6 percent of their tax savings will go to workers and 18 percent to creating jobs, while more than half of all tax savings will go back to investors, according to an analysis from nonprofit Just Capital.

Four months after the tax bill’s passage, the Congressional Budget Office estimated that the bill will increase the national debt by $1.9 trillion over the next decade. Their calculations contradicted promises made by Trump and Republicans leaders before voting on the bill that their tax cut would pay for itself by ramping up economic growth. Treasury Secretary Steven Mnuchin even claimed that the bill would ultimately reduce national debt, leaving America better off financially than it was before.

Not so. In a statement issued shortly after the CBO’s April report, Senate Minority Leader Chuck Schumer argued that the budget analysts had “expose[d] the scam behind the rosy rhetoric from Republicans that their tax bill would pay for itself. From day one, the Republican agenda has always been to balloon the deficit in order to dole out massive tax breaks to the largest corporations and wealthiest Americans.”

Other government analyses since the CBO’s report have reaffirmed that the deficit has grown, and is going to keep climbing: The Treasury Department announced in October that the deficit had increased 17 percent to $779 billion in the first three quarters of 2018 and was on pace to hit $1 trillion in the next year, admitting that the primary cause was a drop in corporate tax revenue. The last time the deficit was as high was in 2012, while the economy was still recovering from the financial crisis. Treasury also announced this month that deficits in October and November increased by $103 billion compared to the same period last year.