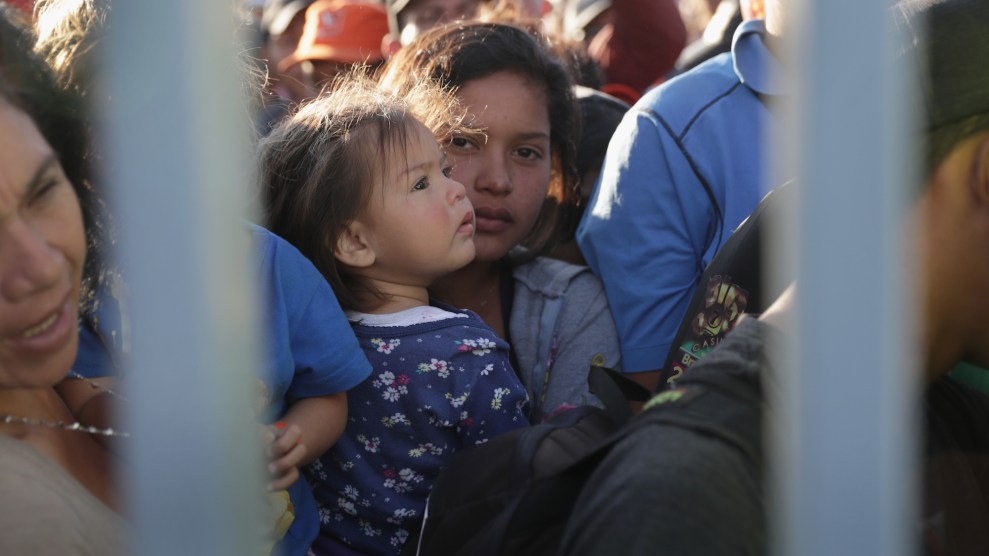 Migrants wait to eat at a temporary shelter near the US-Mexico border in Tijuana, Mexico, in November.John Moore/Getty

On Thursday, Homeland Security Secretary Kirstjen Nielsen announced that the Trump administration will force asylum-seekers to wait in Mexico while their applications for protection in the United States are pending. Remain in Mexico, as the plan was known while under development, is a historic rejection of people fleeing persecution that could force asylum-seekers to spend years waiting in dangerous Mexican border cities.

Remain in Mexico would be the Trump administration’s most significant asylum crackdown to date if the judiciary allows it to remain in effect. Mother Jones spoke to Adam Isacson, a Mexico expert and director of the defense oversight program at the Washington Office on Latin America, about the risks to migrants’ lives posed by the new policy, the threats to their due-process rights, and the reasons a left-wing Mexican president might have agreed to cooperate with Trump.

Mother Jones: What are the biggest humanitarian concerns raised by Remain in Mexico?

Adam Isacson: The No. 1 humanitarian concern is that a lot of migrants are simply not physically safe in Mexican border towns. In Tijuana, which is one of the safer towns, we already saw two Honduran teenagers get murdered [this weekend]. In South Texas, which sees more Central American kids and families than anywhere else, that area is across from the state of Tamaulipas, which is being contested by factions of the Zetas and factions of the Gulf Cartel. It’s a war of all against all. It’s so bad that migrant shelters there don’t let migrants leave at night. The idea now is to have Central Americans wait their turn for months or years in these very, very dangerous places. That’s the No. 1 concern.

If you’re looking at three years in Mexico, you’ll probably have fewer people approaching [Customs and Border Protection], approaching Border Patrol. You’re going to have many more people taking their children through the most remote parts of the desert and trying to evade capture instead of doing what they’re doing now, which is going up to a Border Patrol agent. I worry that instead of just young men trying to evade capture, you’re going to see three-year-olds with their parents trying to do the same thing. It’s just not going to work. People are going to die of dehydration and exposure.

MJ: Can people get a fair shot in US immigration court if they are being forced to wait in Mexico?

“The No. 1 humanitarian concern is that a lot of migrants are simply not physically safe in Mexican border towns.”

AI: Their chance of getting a fair shot in a US immigration court will be much less. If you’re developing an asylum case, you need to be in regular contact with counsel that knows US immigration law. If you can’t have in-person meetings, your case is going to be far weaker. If people are unable to make their cases properly—even if it is a very strong and compelling case of imminent danger—they will be sent right back into the danger they were running away from.

MJ: Mexico just elected a left-wing president, Andrés Manuel López Obrador (AMLO). Why is he agreeing to this plan?

AI: My only guess is that he wants to avoid a big battle with the Trump administration in his first weeks in his office. I’m not sure why he wants to avoid that—you’d think it would actually help rally the people around him—but he seems to want to.

Also, these decisions are being made by Mexico’s foreign ministry more than the agencies that are actually in charge of dealing with migrants. The foreign minister is a former mayor of Mexico City, who is a smart guy but I don’t think is well-versed in the ins and outs of migration.

I can’t imagine they’ve reckoned with the sheer number of people they would be dealing with. I think maybe in their mind they thought they only would be taking 10,000 a year or something. But it will be many times that if this is fully implemented. In 2018 alone, 93,000 people had credible fear interviews [the first step in the asylum process], and just last month, more than 30,000 Central American kids and family members arrived at the border. I think they’re going to be backpedaling.

MJ: The head of Mexico’s migration authority, Tonatiuh Guillén, an AMLO appointee, said yesterday that Mexico doesn’t have the capacity to handle asylum-seekers.

AI: And Tonatiuh ran El Colegio de la Frontera Norte in Baja California, which is a semi-governmental think tank about migration, and he knows all the facts. He knows what this means, and he must be quite panicked.

MJ: How is this policy likely to be received in Mexico once it becomes clear what it looks like in practice?

AI: They’ve never had to deal with that kind of a presence in Mexico before. And some people will welcome this new population with open arms. But as you see just about everywhere, where there’s a sudden change in migration, there’s going to be some xenophobia. And I think AMLO will be blamed for some of it.

MJ: What are the most important things we don’t know?

AI: Even CBP officers on the line have no idea what the specifics are. They have no guidance. What if you are a Central American who is afraid of being in Mexico? How do you convey that fear and prove it? What about people from outside the Western Hemisphere who are also seeking asylum? There’s a long-established route that often starts in Brazil or Ecuador and goes all the way up through Central America and Mexico. Through that route go about 10,000 people from Asia, Africa, Cuba. Will they be forced to spend years in Mexico even if they don’t speak the language?

“It’s just not going to work. People are going to die of dehydration and exposure.”

There are short-term migrant shelters in most border cities. All of those shelters are private. They are run by churches or charities. They get just about nothing from the national government. So this great need—at least in the short term—could fall on charity? To deal with hundreds of thousands of people? That’s impossible.

MJ: If it isn’t blocked in court, is the Remain in Mexico policy more important than a border wall?

AI: It is. The human impact of this is far more than the wall. The wall is mostly symbolic. The wall will not stop determined migrants. This will. This will stop people who desperately need help in many cases, and maybe even send some of them to their deaths. But we also expect the judiciary to get in on this very quickly.