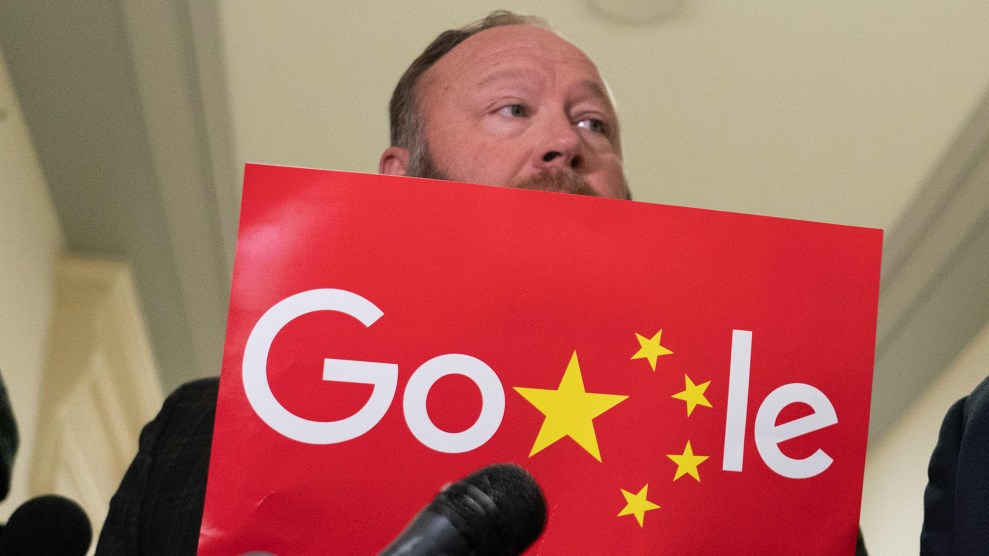 After years of his spreading erroneous conspiracy theories online, in August, tech companies including Facebook, YouTube, Twitter, Apple, and Spotify made headlines when they announced they would finally ban radio host Alex Jones and his Infowars brand from their platforms for violating their terms of service. But now, months later, his conspiracy-laden material remains on several of the sites, sometimes almost as easy to find as it was before he was formally removed.

While Jones no longer has official pages boosting his content on major social-media sites, YouTube and Facebook have so far allowed a series of pages that have cropped up to post Jones’ videos and effectively circumvent the bans. Jones-supporting Facebook pages often do little to hide their identity, explicitly including variations of “Alex Jones” or “Infowars” in their names, and can easily be found by searching for such terms. Some of the pages are not obscure, boasting tens of thousands of followers. They routinely relay livestreams of his daily shows and continue to host archives of them on Facebook.

Jones’ conspiracy-laden material remains on the sites, sometimes almost as easy to find as it was before he was removed.

While Jones has been pushing baseless and often absurd conspiracy theories on the radio throughout Infowars’ 20-year history, the massive audience he gained on digital platforms increased his reach and impact. Before being officially removed from the platforms, Jones had used his social-media presence to promote baseless theories, like that the survivors of mass shootings in Newtown, Connecticut, and Parkland, Florida, were paid actors. Survivors and family members of the shooting victims, who are suing Jones in federal court, say they were forced into hiding due to relentless harassment over the claims.

One Facebook profile that appears to be impersonating Jones has amassed over 70,000 followers. The profile displays a list of links directing users to various Infowars sites, and often posts livestreams of Jones’ shows. Another now-deleted Facebook page, called “Infowars Live,” had over 40,000 followers and posted similar content and links.

Despite Facebook’s Jones ban, a page for what appears to be the official Infowars store remains on the site. Though the account doesn’t post significant Infowars content, its 29,000 followers are exposed to advertisements for products whose sales support Jones and his company. An ad posted on the page shortly after Facebook announced its intention to remove Jones’ accounts encourages users to “to fight back & support the Infowar” by making purchases during a “fight the bullies, save the internet, save Infowars super special.”

Oren Segal, director of the Anti-Defamation League’s Center on Extremism, says Facebook’s decision to not just remove specific Jones videos, but his and his company’s official profiles, suggests the company has ruled the content unfit for its platform. That, he said, makes it all the more puzzling that Facebook has neglected to take enforcement action on Infowars fundraising.

“The public is so confused about what is the real intent of these takedowns,” said Segal. “If someone is still able to raise money and amplify their brand even if it’s not surrounding the content—a radio show, podcast, video program—what is the difference?”

“If someone is still able to raise money and amplify their brand… what is the difference?”

Facebook spokeswoman Sarah Pollock acknowledged confusion around the company’s policies regarding Jones. “In August, we removed (4) specific Pages InfoWars and Alex Jones maintained because those specific Pages had repeatedly posted content that violated our Community Standards. The content in question was specific videos that violated our policies,” she wrote in an email, adding that “not all videos posted violate our policies.”

In a January 4 video taken from Jones’ show and posted to Facebook by “Infowars Live Feed,” he says a host of hateful comments that ostensibly violate Facebook’s policies: “You have a sickening alliance of hijab-wearing women [in Congress]. I mean, I go to restaurants…and there’s women in full burqas taking spoonfuls of food and eating it under their—we’re talking slits where their eyes are. These are captured slaves who have had their genitals cut off,” he said, before comparing wearing a burqa in a restaurant to wearing a gorilla costume in public. “I’m not putting up with it anymore. And that’s why I’ve been banned off all these platforms,” he said in the video. Facebook deleted the page after Mother Jones asked about the video.

In another case, the administrators of one Infowars tribute page, “Infowars Stream,” published a supposed screenshot in November of a message from Facebook informing them that a Jones video it posted was deleted because it violated Facebook’s “community standards on hate speech.” The page regularly posted Infowars video content through that month, until the Washington Post noted the page’s existence in an article on Jones’ continuing presence on the platform. After the public attention, its administrators claimed in a post that Facebook had “blocked us from streaming live for an indefinite amount of time.” The page continues to repost Jones streams from other pages that still broadcast Infowars content.

On YouTube, Jones-allied accounts are somewhat harder to find, but his videos are usually uploaded daily by a smattering of users, and search terms like “Alex Jones Full Show” return fruitful results; adding a particular date often surfaces the corresponding show.

Jones’ videos not only spread conspiracy theories, but have become a hub for far-right radicalization.

A YouTube spokesperson told Mother Jones that the company has no specific ban on Jones or Infowars content, but noted that his past policy violations caused the company to delete all channels associated with “TheAlexJonesChannel,” his onetime-official page. The company says it has also deleted channels not directly associated with Infowars but that are dedicated to posting its content without commentary or context—something Facebook has so far not consistently done.

“All users agree to comply with our Terms of Service and Community Guidelines when they sign up to use YouTube. We review flagged content and remove it when it violates our Guidelines and apply a strike to the account. When users violate these policies repeatedly we terminate their accounts,” a YouTube spokesperson explained in an email.

“There’s a discrepancy between what they say their values are and what they actually do,” Lewis said. “They say their platforms are safe and that everyone has a voice, but then they let people who shut down other conversations make people feel less safe and take away other people’s voices.”

Other major social-media platforms have done a better job keeping Jones away. If there is a significant cache of Jones content on Twitter, it’s not easy to find beyond short clips of his show posted by users, or posts from people affiliated with Infowars who remain on the platform, like correspondents Millie Weaver and Paul Joseph Watson.

Online, Jones’ videos not only help spread conspiracy theories, but have become a hub for reactionary radicalization. Outlets like Bellingcat have documented how the comment sections below Jones’ videos act as recruitment tools for far-right ideologues and online gathering places, including r/The_Donald, pro-fascist Discord chatrooms, and 4chan message boards.

“Whether it’s fake news or conspiracy theories, his content is often the lifeblood of conspiracies and hate,” Segal says, no matter how such content may end up on a major platform. “If AlexJonesSupporter57 is literally taking it upon themselves to get his content up, what’s the difference…You think they’d try to stop it.”