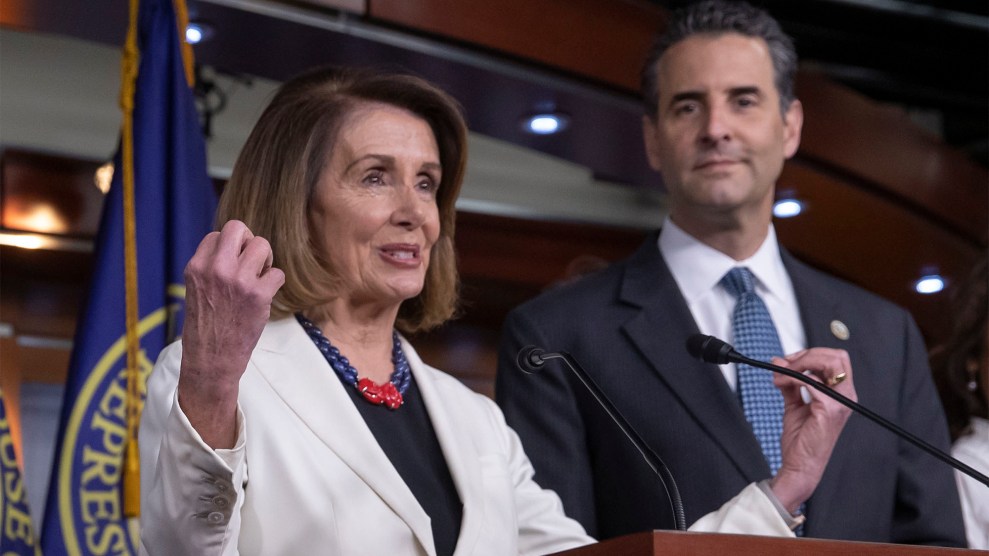 Speaker of the House Nancy Pelosi and Rep. John Sarbanes (D-Md.) discuss the priorities of the 116th Congress.J. Scott Applewhite/AP

House Democrats introduced a sweeping bill on Friday as their first order of legislative business that would expand voting rights and curb the influence of money in politics, signaling their commitment to push back on Republican efforts to undermine the democratic process.

The legislation, known as HR 1: The For the People Act, would make it easier to vote, crack down on gerrymandering, and reduce the influence of big money in congressional races. It would also institute new ethics rules, including one requiring sitting presidents and presidential candidates to release their tax returns.

The bill has three major parts, beginning with a slew of measures designed to expand voting rights, which would counteract Republican voter suppression efforts. These include nationwide automatic voter registration, Election Day registration, two weeks of early voting in every state, an end to aggressive voter purging, funding for states to adopt paper ballots, the restoration of voting rights for ex-felons, and declaring Election Day a federal holiday. While states control their voting laws, Congress has the power to set voting procedures for federal elections.

The bill would also target partisan gerrymandering by requiring independent commissions instead of state legislatures to draw congressional maps. Furthermore, the bill calls on Congress to restore the full strength of the Voting Rights Act at a future date, after the Supreme Court gutted it in 2013. House Democrats are planning to hold a vote to expand the Voting Rights Act and require the federal government to approve any voting changes in states with a well-documented history of recent voting discrimination, but first they’ll convene hearings on the prevalence of voter suppression in GOP-controlled states.

The second section of the bill tackles campaign finance reform to address the skyrocketing costs of congressional campaigns and increasing influence of corporate money. This includes a new small-donor matching system to encourage congressional candidates to rely on public financing instead of large donors, so that every $100 raised would trigger $600 in matching public funds. The bill also requires dark-money groups to disclose their donors.

The third section would enact ethics and lobbying reforms. Most notable is the requirement that sitting presidents and vice presidents, along with candidates for those offices, release their tax returns from the past 10 years. This is clearly aimed at President Donald Trump, who was the first major party nominee in 40 years not to release any of his tax returns.

.@HouseDemocrats are keeping our promise to the American people & unveiling #HR1, the #ForThePeople Act, a historic reform package to restore the promise of our democracy, end Washington’s culture of corruption, & reduce the role of money in our politics. https://t.co/vBMx8bQb1T

The bill represents the most far-reaching democracy reform plan introduced in Congress since the Watergate era. Harvard Law School professor Lawrence Lessig calls it “the most important civil rights bill in half a century.” It also builds on recent state-level efforts to expand voting rights: In the 2018 midterms, eight states passed ballot measures to make it easier to vote and harder to gerrymander.

Of course, the bill as a whole has little chance of being passed in the Republican-controlled Senate. “That’s not going to go anywhere in the Senate,” Senate Majority Leader Mitch McConnell said in early December. Small pieces of the bill with bipartisan support, on issues like election security, could be passed as separate legislation.

But HR 1 is as much a political document as a legislative one, laying down a marker of what Democrats stand for and drawing attention to often-overlooked “good government” issues. “In the face of a torrent of special-interest dark money, partisan gerrymandering and devious vote-suppression schemes, voters elected a House Democratic majority determined to bring real change to restore our democracy,” House Speaker Nancy Pelosi and Rep. John Sarbanes (D-Md.), the legislation’s lead sponsor, wrote in the Washington Post after the election.

House Democrats unveiled the bill at a press conference at the Capitol on Friday morning. Civil rights leader Rep. John Lewis (D-Ga.), who was brutally beaten while marching for voting rights in Selma, Alabama, in 1965, pointed to voter suppression efforts in states like Georgia and Florida in 2018 as a reason why the bill was so important. “I truly believe,” said Lewis, “that the way votes were not counted and purged in states like Georgia and Florida and other states changed the outcome of the last election. That must never happen again in our country. We will make it illegal.”