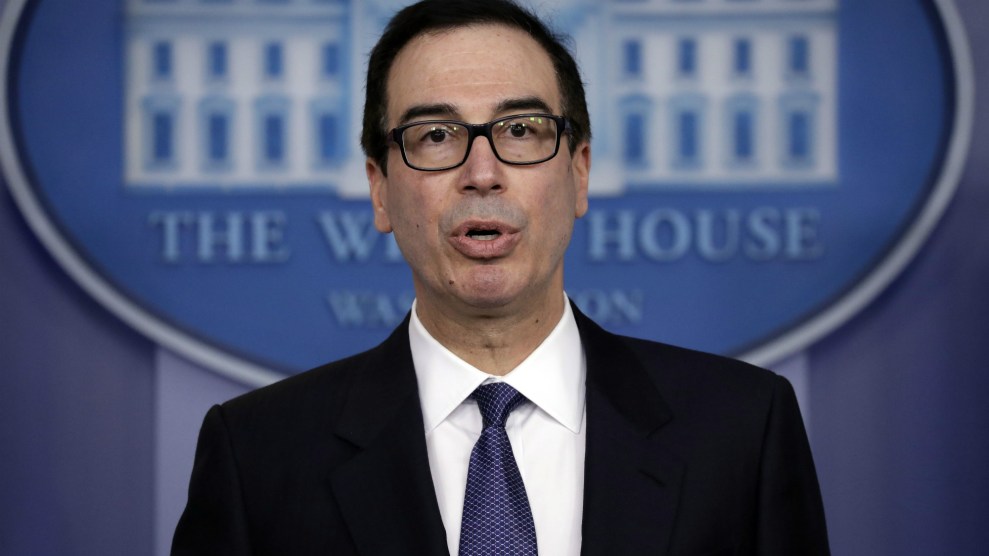 Congressional Democrats want to know if there’s more to the story on why the Trump administration removed sanctions on three companies owned by Russian oligarch Oleg Deripaska.

The energy and aluminum magnate and his companies were sanctioned last April as part of an effort to target oligarchs known to be close to Russian President Vladimir Putin. But in December, Treasury Secretary Steve Mnuchin said he planned to remove the firms from the sanctions list because Deripaska had agreed to divest himself of a controlling interest in the firms. Democrats mounted an effort to reverse the delisting decision, but failed to get enough Republican support in the Senate to pass a resolution blocking the move. The sanctions on the firm were lifted on Sunday, although Deripaska personally remains on a list of sanctioned individuals.

Now, Democrats are taking Mnuchin to task over how much control Deripaska really agreed to give up and whether Mnuchin may have had a conflict of interest in the decision resulting from his business relationship with another Russian businessman who stood to benefit from Treasury’s agreement with Deripaska. On Tuesday, the chairmen of the House intelligence, financial services, and foreign affairs committees sent Mnuchin a letter notifying him that they are launching an investigation into the decision-making process behind the delisting. The letter requested Treasury turn over all documents relating to the delisting and ordered the agency to explain who will benefit from the transactions Deripaska agreed to make in connection with his agreement to relinquish control of the companies.

Deripaska is one of Russia’s wealthiest men. He has in the past been banned from entering the United States over alleged ties to Russian organized crime (which Deripaska denies). He has also come under scrutiny in special counsel Robert Mueller’s investigation into Russian interference in the 2016 election. The oligarch is a former lobbying client and business associate of President Donald Trump’s imprisoned ex-campaign chairman, Paul Manafort, who allegedly owes Deripaska millions and tried to repay this debt by offering the oligarch insider briefings on the 2016 presidential election.

From the start, the sanctions against Deripaska’s companies—En+ Group LLC, a large mining and energy conglomerate; UC Rusal PLC, one of the world’s largest aluminum mining companies; and JSC EuroSibEnergo, Russia’s largest private power company—were controversial and rattled the global aluminum market. Although sanctions against Deripaska went into effect immediately—preventing Americans from doing business of any kind with him—Treasury granted a series of waivers to allow his companies to continue to do business as normal. In December, before the sanctions were officially applied, Mnuchin announced that Treasury had brokered an agreement with Deripaska.

According to the public documents released by Treasury, Deripaska would reduce his ownership in the companies to less than 50 percent, transferring his shares to other companies. The documents did not fully disclose the identities of the outfits poised to take control of Deripaska’s shares.

House Democrats summoned Mnuchin to Capitol Hill in early January to explain his delisting decision, and following the briefing they accused the treasury secretary of obfuscating. “With stiff competition, mind you, this is one of the worst classified briefings we’ve received from the Trump administration,” House Majority Leader Nancy Pelosi told reporters. Mnuchin insisted that he had been forthright and said he was “surprised” that House Democrats felt they didn’t have enough information.

“These entities are undergoing significant restructuring and governance changes that sever Deripaska’s control and significantly diminish his ownership,” Mnuchin said at the time. “They have committed to provide Treasury with an unprecedented level of transparency into their dealings to ensure that Deripaska does not reassert control. As a result, these entities will no longer be designated for sanctions.”

However, according to confidential Treasury documents obtained by the New York Times last week, the details of Deripaska’s agreement to limit his involvement with the sanctioned companies varied drastically from what was presented publicly. For instance, Treasury said that Deripaska would reduce his ownership of En+ from 70 to 44.95 percent. But the confidential documents show that Deripaska will transfer shares to a foundation that he founded and funds, as well as to his ex-wife, her father, and a related company. All told, the shares owned by Deripaska, his foundation, and his close family will total about 57 percent, suggesting he will in fact retain control of En+. Also, despite public claims by the Treasury Department that he would not be allowed to profit from the transactions, the confidential documents suggest that by turning over shares to a Russian state-owned bank, he would benefit by retiring some of his debts to the institution.

In their letter to Mnuchin, which cites the Times‘ reporting, the House committee chairmen note that Treasury’s agreement with Deripaska “appears designed to allow him to retain significant influence, if not de facto control, over En+, Rusal, and ESE.” And the letter notes that “many questions remain unanswered.”

Earlier this week, Rep. Jackie Speier (Calif.) sent a separate letter probing whether Mnuchin has a personal conflict of interest in the delisting deal. In her letter, first reported by Buzzfeed, Speier noted that prior to taking office Mnuchin owned a movie production company that he sold, in part, to Access Industries, a company owned by Len Blavatnik, a Russian-born billionaire who has ties to Deripaska. Blavatnik sits on the board of a company called SUAL, a major shareholder in Rusal. According to the New York Times, SUAL’s stake in Rusal will increase as part of Deripaska’s deal with the Treasury Department. In short, a man who is believed to have paid Mnuchin as much as $25 million for his movie company may well benefit from the deal to remove Rusal from the sanctions list.

Blavatnik is a US citizen who lives primarily in Britain, where he is sometimes described as the wealthiest man in the United Kingdom. He has donated to American political candidates and PACs for years, but in 2016 tilted his giving heavily to the right; Access Industries donated $1 million to Trump’s inaugural fund, and Blavatnik attended the inauguration.

Update: The Treasury responded to Speier’s letter with their own, strongly denying any connection between Mnuchin and Blavatnik, or that there was a deal between the two of them.

Treasury adamantly denies Mnuchin has any connection to anyone who might stand to benefit from decision to delist Oleg Deripaska's companies https://t.co/PgqF1n7hsX pic.twitter.com/eL8NFxqfeQ

A representative for Access Industries did not respond to a request for comment on whether Mnuchin has any ongoing relationship with Blavatnik.