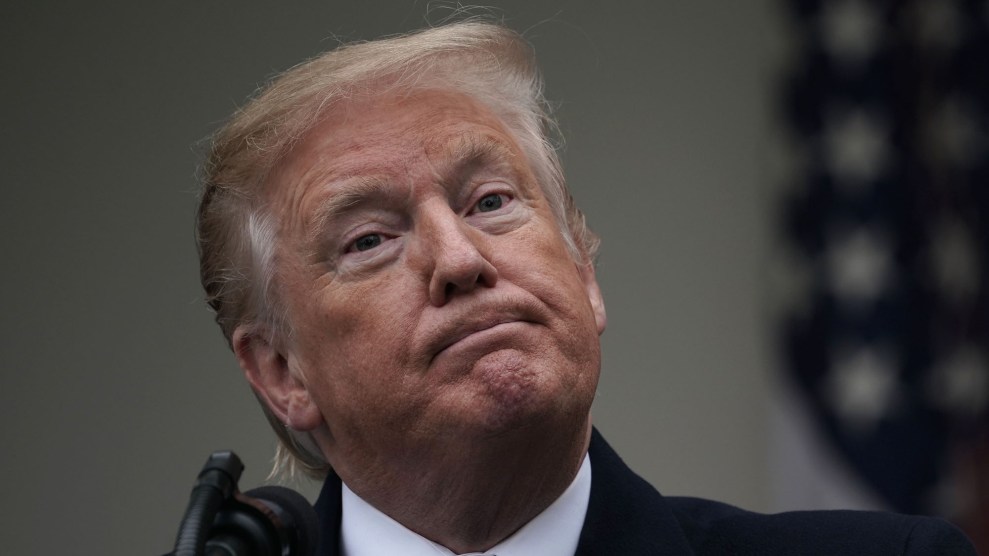 On Tuesday night, Donald Trump used the first Oval Office address of his presidency to falsely depict undocumented immigrants as savage criminals. Trump is keeping the US government shut down because Congress, which was controlled by Republicans until last week, has refused to give Trump border wall money for two years.

Trump considered declaring a national emergency on Tuesday night so he could direct the military to build sections of the wall. At least for now, he has decided not to do so. The absence of an emergency declaration, which would blatantly violate democratic norms and be quickly challenged in court, meant that Trump’s speech contained no new information or policy announcements. Instead, it was a return to the theme that launched his path to the White House: Immigrants are violent and they’re coming for your family.

Trump ticked through a long list of gruesome murders in the speech that he said were committed by undocumented immigrants. But while individual stories might be horrific, there is no evidence of a crime wave perpetrated by undocumented immigrants. Crime stats don’t suggest that people residing in the country illegally commit crimes at a higher rate than people born in the United States. In Texas, according to a 2018 analysis by the libertarian Cato Institute, native-born Americans were convicted of crimes at more than twice the rate for the undocumented population. Another recent study in the journal Criminology found that violent crime appears to fall—not increase—when more undocumented immigrants live in a community. US border communities also have low crime rates.

Trump stood by his administration’s misleading effort to tie the wall to stopping drug smuggling. As Mother Jones reported earlier Tuesday, the vast majority of hard drugs are smuggled through cars that drive through official ports of entry. Trump said his administration is requesting cutting-edge technology to detect more drugs. He failed to mention that the technology is for ports of entry, not areas where migrants cross the border without authorization.

Following the deaths of two migrant children in Border Patrol custody last month, Trump stuck with the administration’s message that there is both a security and a humanitarian crisis at the border. There is no security crisis. Border Patrol agents are apprehending far fewer migrants than they used to, and a growing number of the people they take into custody are families looking for US authorities in order to request asylum. And Trump’s concern about a humanitarian crisis is hard to take seriously after his administration forcibly separated more than 2,500 migrant families this spring.

All major networks aired the speech after choosing not to carry a 2014 speech by former President Barack Obama that introduced policies designed to shield millions of undocumented immigrants from deportation. Obama’s speech was ostensibly considered too overtly political. The fact that it happened on a Thursday in November—a key night for ratings—may have played a bigger role in the decision not to air it.

The government has now been closed for more than two weeks, and the shutdown would become the longest in US history if it lasts until this weekend. No end is currently in sight. Trump will travel to the border on Thursday to continue to make his case for the wall.