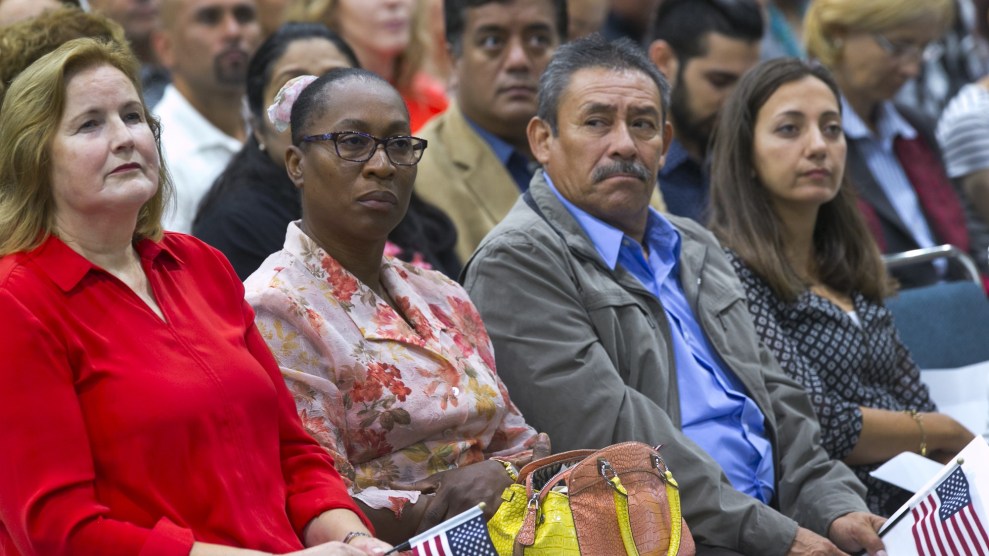 Over the past two fiscal years, case processing times for immigrants applying for legal status and other benefits have surged by 46 percent, causing “crisis-level delays,” according to a report released Wednesday by the American Immigration Lawyers Association.

US Citizenship and Immigration Services, the agency in charge of processing these applications, has always been notorious for lengthy processing times, but in fiscal year 2018, it took nearly nine-and-a-half months on average for USCIS to process a case—about a month and a half longer than the previous year. Over the past four years, case processing time for naturalization applications, for instance, have doubled, jumping from an average of 5.2 months in 2014 to 10.2 months in 2018. The added delays could be attributed at least in part to a 27 percent spike in citizenship applications in 2016.

But the problems aren’t confined to naturalization applications alone—almost 95 percent of application types have seen increased processing times since 2014. Applications for green cards and green card renewals, naturalization, asylum, and applications to bring relatives to the US have all experienced delays. Long wait times can also be particularly distressing for people seeking protection—the processing time for Form I-360, which provides legal status for survivors of domestic abuse as well as young children abandoned by their parents, grew from 4.8 months in 2016 to 13.5 months in 2018.

“The impacts of these delays are serious and sweeping,” Jason Boyd, policy counsel at AILA and author of the report, told Mother Jones in an email. “Longer processing times mean families struggle to make ends meet, survivors of violence and torture face danger, and US companies fall behind. Millions of individuals and employers need, and need now, an efficient, fair, service-oriented agency that exemplifies our nation of immigrants.”

AILA’s report attributes much of these severe delays to recent Trump administration policies that have complicated pathways to legal status. As I’ve reported previously, since the spring of 2017, USCIS has ramped up its scrutiny of work visa petitions and added time-consuming requirements, such as in-person interviews for employment-based green card applications. Other categories of applications, such as student visas, now also face stricter requirements. And making matters more dire for applicants, last June, USCIS issued a new policy that makes it far easier for the agency to deport immigrants whose applications are denied.

Boyd tells Mother Jones that some of these developments have undoubtedly had a “chilling” effect on applications.

In fact, USCIS did see a decrease in the number of cases it received in the third quarter of 2018. Even still, processing times increased substantially, according to AILA. Boyd noted that more “Requests for Evidence” from USCIS and the new in-person interview requirement both may have further slowed the process.

In a report to Congress last April, USCIS acknowledged that in addition to lack of staffing and an increase in cases, “new statutory and policy decisions” and more security checks have made case processing more complex, adding to its current backlog; at the end of fiscal year 2017, the agency faced a record backlog of more than 2.3 million cases, more than double that of the previous year. It also noted that the agency was “expecting additional challenges” in the 2018 fiscal year, in part due to President Trump’s travel ban and executive order that banned refugees and foreign nationals from certain countries, which would require the agency to perform more interviews.

“The truth is that while many factors relating to an individual’s case can affect processing times, waits are often due to higher application rates rather than slow processing,” USCIS spokesman Michael Bars wrote in an email, noting that the agency has recently opened three new field offices and expanded others to increase capacity. “That is why USCIS has implemented a range of process and operational reforms, hired additional staff, and expanded its facilities to ensure its ability to adjudicate keeps pace with unprecedented demand for its services over recent years. Where possible, cases are completed well within the agency’s standard processing goals.”

On a press call Wednesday, AILA’s first vice president Jennifer Minear stressed that these delays can be dire for applicants.  “When you consider the fact that the outcome of your case is increasingly, under this administration, arbitrary and inconsistent, and you have to wait for an unpredictable outcome for an unpredictable length of time—that just makes it all the more nerve-wracking and frustrating to plan your life.”