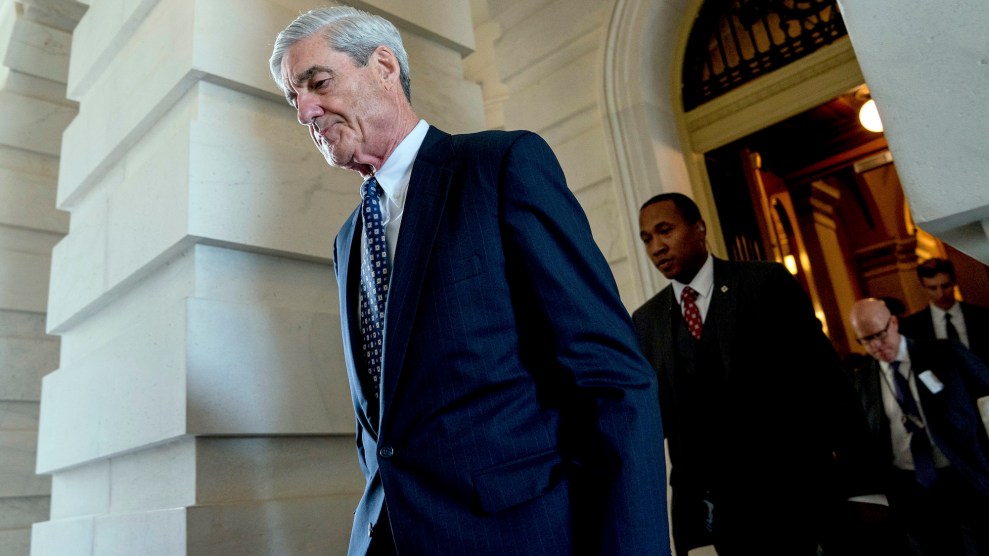 You hear people say it again and again: Just wait for Robert Mueller’s final report. But they’re overlooking one distinct possibility: There may not be a Mueller report. Or at least not the kind of fulsome, tell-all report they have in mind.

Democrats on the Hill, cable television pundits and analysts, social media influencers, voters, your cousin. They’re all talking about—and hyping—this supposed moment of truth, when the special counsel will reveal all that he and his team have discovered about Moscow’s attack on the 2016 election and interactions between the Trump crew and Russia. Even Trump’s camp has promoted the notion that a dramatic climax in written form is approaching. Rudy Giuliani, President Donald Trump’s lawyer, has repeatedly referred to a Mueller report. And Trump himself has tweeted about a Mueller report, calling it the “Witch Hunt Report,” claiming it will be unfair, and vowing, “We will be doing a major Counter Report to the Mueller Report.”

Here’s the problem with all this speculation and anticipation: Mueller is under no obligation to produce a final report that shares with the public the full breadth of what he has uncovered.

The Justice Department guidelines governing the work of a special counsel do not compel Mueller to compile such a report. They only include one sentence about a report: “At the conclusion of the Special Counsel’s work, he or she shall provide the Attorney General with a confidential report explaining the prosecution or declination decisions reached by the Special Counsel.”

At this point, there are no indications whether there will be an explosive final report (or reports) or something minimal and narrow—and whether any report will reach the public.

This description is rather elastic. It could entail a brief report that merely lists the indictments Mueller has brought, briskly explains why he decided to pursue these cases, and perfunctorily states that he found no other activity he deemed worthy of prosecution. Yet this regulation would seemingly also allow for a lengthy report that details all the investigative digging conducted by Mueller and his crew—everything they unearthed—with explanations of why he did and did not initiate criminal cases. This sort of report could be comprehensive and disclose the specifics of wide-ranging political skullduggery that did not draw indictments—perhaps even name names—and might be horrific for Trump and his henchmen. But Mueller is under no official commitment to perform such a grand finale.

As a Justice Department special counsel, Mueller is presumably working under the department’s rules that do not permit prosecutors to make public the information they gather that is not revealed in the course of a criminal case—that is, material beyond the information presented in an indictment, in court filings, or in evidence submitted during a trial. Federal prosecutors are generally prohibited from exposing what they have learned during an inquiry besides what they openly use in a prosecution. That’s why it was such a big deal in 2016 when former FBI Director James Comey publicly said Hillary Clinton should not be indicted for mishandling emails when she was secretary of state and also discussed details of the FBI’s investigation and criticized Clinton’s actions. Federal prosecutors usually face a stark binary choice: file charges or keep quiet. So will Mueller be free to describe in a final report what he found that was not revealed in the criminal cases he pursued?

Once upon a time, Washington had independent counsels who indeed did file massive final reports that were publicly released. This was a post first created by a 1978 act of Congress that set up temporary offices for investigating possible wrongdoing by past and present high government officials. The post-Watergate law called on these special prosecutors to bring criminal cases, if warranted, and to file public reports fully describing what their excavations uncovered. A good example: Iran-Contra independent counsel Lawrence Walsh. He spent six years investigating that Reagan administration scandal, prosecuted several cases, and at the end in 1993 produced a 572-page report chronicling a vast swath of wrongdoing and sleaze that went far beyond the indictments. That work is considered a masterpiece of government reports. Five years later, Kenneth Starr, another independent counsel, produced a report that achieved its own infamy.

In 1999, the legislation establishing the independent counsel expired, and Congress did not renew it. (Republicans and Democrats in Washington had been targeted by independent counsels, so there was antagonism toward the law on both sides of the aisle.) That was when the Justice Department developed its guidelines for a special counsel—which included no mention of a final public report. Under these regulations, in 2003, Patrick Fitzgerald, a US attorney, was appointed special counsel to investigate the outing of CIA officer Valerie Plame. (Her husband, former ambassador Joseph Wilson, had enraged the Bush-Cheney White House by publicly challenging its bogus claim that Iraq had to be invaded because it was developing nuclear weapons.) Fitzgerald ended up successfully prosecuting Scooter Libby, Vice President Dick Cheney’s chief of staff, for obstructing justice. But he never produced a public report covering all his investigation had dug up. (Libby’s prison sentence was commuted by President George W. Bush, and he was pardoned by Trump last year.)

The Justice Department guidelines under which Mueller is operating note that his final report explaining his prosecution decisions is confidential and gets delivered only to the attorney general. If the attorney general has recused himself in this matter, as former Attorney General Jeff Sessions did, then the report goes to the deputy attorney general, a position now occupied by Rod Rosenstein (who reportedly may soon leave the Justice Department). With the attorney general nomination of William Barr now pending, it’s unclear who will be in the Justice Department’s top chair—and who will be responsible for overseeing the Trump-Russia investigation—when Mueller is finished. But that’s the official who will get the report—whether it is a short roundup of the prosecutions or something more comprehensive—and he will not have to show it to the public. If the Justice Department does try to sit on the report, House Democrats will no doubt demand a copy. And it’s not difficult to envision a subsequent dust-up that could reach the Supreme Court. (The regulations, though, do note that if the attorney general at any time prevented the special counsel from pursuing an action because he believed it was “inappropriate or unwarranted under established Departmental practices,” the A.G. must report that to Congress at the end of the investigation.)

There is another possible—or parallel—scenario. Mueller has been investigating whether Trump obstructed justice. It remains a matter of legal debate whether a president can be indicted for a federal offense while in office. Justice Department policy says a president cannot be charged. Some legal scholars disagree. For instance, Neal Katyal, a former acting solicitor general contends that “generic DOJ opinions about whether a sitting President could be indicted do not create an ‘established Departmental practice’ about whether an individual could be indicted for successfully cheating in a Presidential election.” The courts have never settled this question. So what might Mueller do if he gathers information that supports a charge of obstruction related to Trump?

Mueller conceivably could submit his findings to Congress. In 1998, Starr did not indict President Bill Clinton. Instead, he handed a thick report to the House of Representatives. It was full of salacious details about Clinton’s affair with intern Monica Lewinsky and outlined grounds for impeachment. The GOP-controlled House quickly voted to present the report to the public. (This move backfired for the Republicans, who faced a backlash over their drive for impeachment and their release of Starr’s X-rated report.) Should Mueller decide that Trump may have committed obstruction of justice and that the president cannot (or ought not) be indicted, he might follow Starr’s example and give a report on Trump’s alleged obstruction to the House Judiciary Committee for possible consideration of impeachment. (Could the Trump Justice Department block such a move? Hmmm.) It would then be up to House Democrats to decide whether to make such a report public. In other words, here it comes.

At this point, there are no indications whether there will be an explosive final report (or reports) or something minimal and narrow—and whether any report will reach the public. Peter Carr, Mueller’s spokesman, will only say, “All I can point you to is what the regulations say.”

These regulations do not guarantee the public will receive a full accounting. Providing the citizenry a complete account of the Trump-Russia scandal is actually the responsibility of Congress. But the Republicans on the House intelligence committee put on a clown-show investigation, and the Senate intelligence committee investigation is still underway with no signs of what it will ultimately yield. Neither of these committees have held a series of public hearings that such a subject warrants. (The Democrats who now control the House have signaled they will revive portions of the Russia investigation and will be mounting hearings.) House and Senate Republicans also blocked the creation of an independent commission to investigate the Russian assault on the election and to produce a public report.

So now many people are turning to Mueller to supply the full rundown on what happened. His primary mission, though, has been to search for crimes and prosecute those cases for which he believes he can win a guilty verdict. His job is not to inform the public. Mueller is a veteran G-Man looking to serve and deliver justice. A critical question is, can he also serve and deliver the truth?