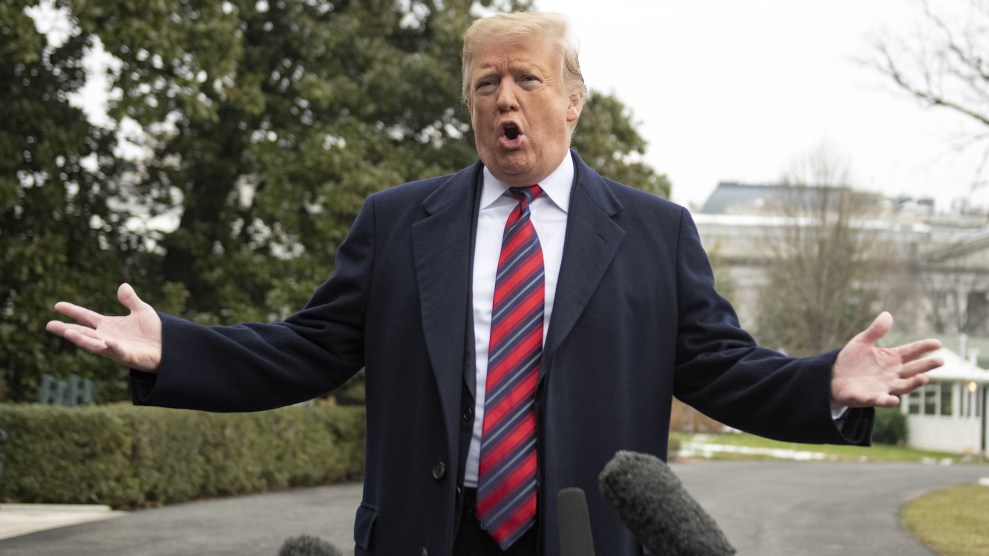 President Donald Trump makes remarks to the media as he prepares to depart the South Lawn of the White House on Saturday, January 19.Ron Sachs/CNP via ZUMA Wire

Two years ago today, before a crowd of debatable size, President Donald Trump stood on the steps of the Capitol to take the oath of office that would make him the 45th President of the United States. And while the federal government marked the anniversary by entering the 29th day of a partial government shutdown, Trump celebrated with a mixtape of his greatest hits on Twitter.

The president opened by taking credit for job growth, which has been steadily improving. He left out, of course, the fact that the GOP’s 2017 tax cuts have ballooned the federal deficit and that an estimated 800,000 federal workers haven’t seen a paycheck in a month.

Always heard that as President, “it’s all about the economy!” Well, we have one of the best economies in the history of our Country. Big GDP, lowest unemployment, companies coming back to the U.S. in BIG numbers, great new trade deals happening, & more. But LITTLE media mention!

Next, the president tried to add a little levity to Winter Storm Harper, the massive snow system that’s already responsible for five deaths, by taking a dunk on climate change. “Wouldn’t be bad to have a little of that good old fashioned Global Warming right now!” he tweeted. The Washington Post‘s weather team quickly clapped back with a reminder that the last four years on the planet have been it’s warmest, something the president “might have heard direct from NOAA and NASA if the government was open and you listened to their excellent scientists.”

Be careful and try staying in your house. Large parts of the Country are suffering from tremendous amounts of snow and near record setting cold. Amazing how big this system is. Wouldn’t be bad to have a little of that good old fashioned Global Warming right now!

He followed up with a series of tweets about the offer he made to Democrats yesterday in an effort to reopen the government, which would reinstate protections to some undocumented immigrants, including Dreamers who came to the United States as children, in exchange for $5.7 billion in border wall funding. (Reminder: Trump was the one who scrapped the protections in the first place.) Pelosi and fellow Democrats, who view the deal as non-starter, prompted both hostility from the president—“They don’t see crime & drugs, they only see 2020”—and that trademark humility—“which they are not going to win.”

Nancy Pelosi and some of the Democrats turned down my offer yesterday before I even got up to speak. They don’t see crime & drugs, they only see 2020 – which they are not going to win. Best economy! They should do the right thing for the Country & allow people to go back to work.

Trump, of course, lingered on Pelosi, calling the Speaker a “Radical Democrat,” and claiming she is “petrified” of the ‘lefties’ in her party.” Trump also attacked the “disgusting” streets of San Francisco. (Pelosi represents a district that includes the city.)

Nancy Pelosi has behaved so irrationally & has gone so far to the left that she has now officially become a Radical Democrat. She is so petrified of the “lefties” in her party that she has lost control…And by the way, clean up the streets in San Francisco, they are disgusting!

Trump then claimed that his poll numbers among Hispanics had gone up from 19 to 50 percent, apparently deploying the number as proof that his border wall deal was popular among Latino voters. (Mother Jones is still scouring the internet for the poll the president is citing.)

Wow, just heard that my poll numbers with Hispanics has gone up 19%, to 50%. That is because they know the Border issue better than anyone, and they want Security, which can only be gotten with a Wall.

To close, he thanked conservative commentator David Wohl (the father of Jacob, a prankster also famous for his Twitter-based fealty to Trump) for criticizing the news media. Wohl’s tweet likened the Buzzfeed journalists, who reported Friday that the president had directed his attorney Michael Cohen to lie Congress, to “circus clowns” and “hatchet men for the DNC.” (The Office of the Special Counsel has disputed the claims made in Buzzfeed’s story.)