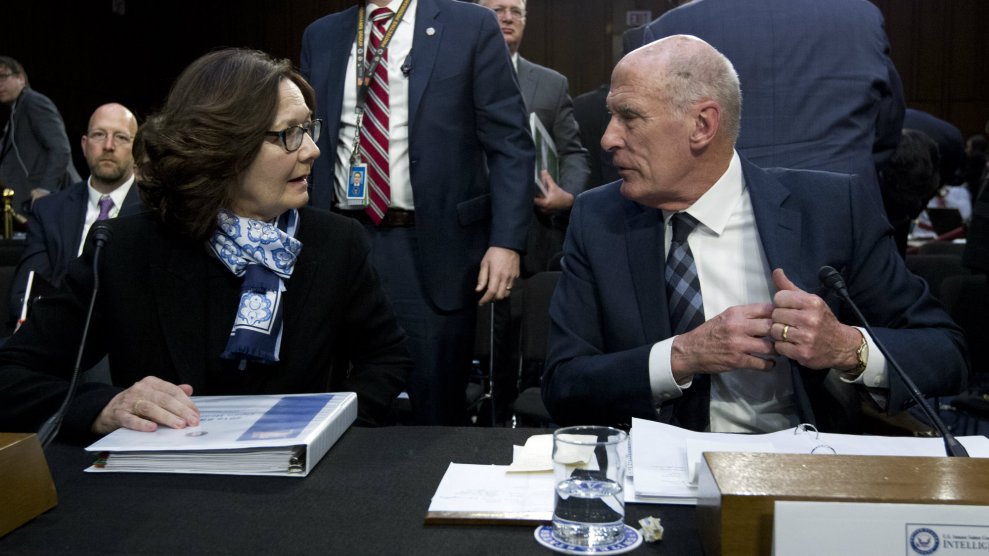 Days after Donald Trump called the intelligence community “extremely passive and naive” for publicly contradicting his views on Iran, the president decided to blame the media instead. In a series of tweets Thursday afternoon, Trump said the media “distorted” and “mischaracterized” the intelligence chiefs’ Senate testimony about global threats. Reporters quickly seized on the hearing as evidence of Trump’s disagreements with his intelligence team.

….I would suggest you read the COMPLETE testimony from Tuesday. A false narrative is so bad for our Country. I value our intelligence community. Happily, we had a very good meeting, and we are all on the same page!

Tuesday’s hearing before the Senate intelligence committee convened the heads of the major intelligence agencies to deliver their annual global threat assessment, which contained several statements at odds with Trump’s public positions. The 42-page report, for example, refers to climate change as a threat to “infrastructure, health, and water and food security.” Trump has called global warming a Chinese hoax, and has even dismissed a report produced by his own administration that warned of grave economic consequences if the United States did not curb its carbon dioxide emissions. “I don’t believe it,” Trump had said.

Other elements of the report flatly dispute Trump’s view of North Korea. After returning from his summit with dictator Kim Jong-un in June, Trump tweeted, “There is no longer a Nuclear Threat from North Korea.” The report came to the opposite conclusion, noting, “North Korea retains its WMD capabilities, and the [intelligence community] continues to assess that it is unlikely to give up all of its WMD stockpiles, delivery systems, and production capabilities.” During the hearing, Sen. Kamala Harris (D-Calif.) pressed Gina Haspel, the CIA director, on whether North Korea has shown any signs of changing its behavior. Haspel affirmed the intelligence community’s assessment. “I don’t think I can point to any specific changes over the past couple of years,” she said.

Twenty-four hours ago, Trump’s Twitter feed told a much different story about the hearing. Rather than question the media’s reporting, he challenged the intelligence community directly.

The Intelligence people seem to be extremely passive and naive when it comes to the dangers of Iran. They are wrong! When I became President Iran was making trouble all over the Middle East, and beyond. Since ending the terrible Iran Nuclear Deal, they are MUCH different, but….

Trump reportedly watched the hearing live from the White House and was “furious” when early news coverage showed his views being contradicted by his advisers, according to CNN. Now it appears after meeting with his intelligence chiefs, Trump is singing a different tune. “We are very much in agreement on Iran, ISIS, North Korea, etc.,” he said, adding, “[a] false narrative is so bad for our Country.”