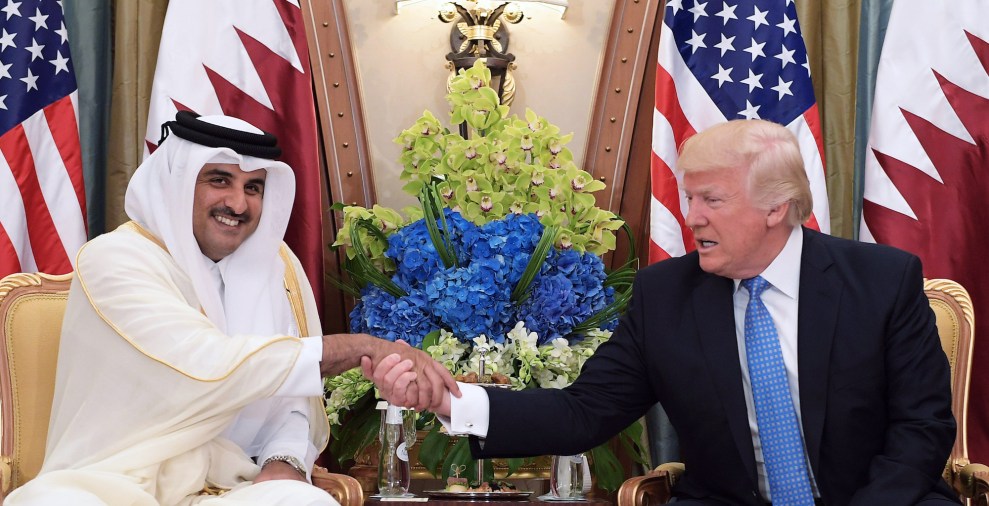 Here’s a new scandal for Donald Trump: The president personally encouraged the Qatari government to finance a nuclear power plant project pursued by a top Trump donor. And shortly after Trump’s intervention, this big-money donor, Franklin Haney, a Memphis-based real estate developer who contributed $1 million to Trump’s inaugural committee, hired Michael Cohen, the president’s longtime personal lawyer, to help land this Qatari investment. This wheeling and dealing was occurring as the Gulf nation was eagerly seeking to gain influence with Trump. It’s a tale of how the Trump swamp works: Trump’s personal and political connections overlap with private business interests that are linked to foreign policy matters.

This episode, described by Haney this week to a local newspaper, places Trump in the midst of a highly controversial deal and suggests that Trump used his power to benefit the private business venture of a major donor. These events also show how the casual corruption of the president and some of his advisers could have influenced US foreign policy in the Middle East.

If Haney’s account is correct, Trump urged Qatar to finance a private business deal being put together by a major Republican donor at the same time Qatar was seeking to win Trump’s support on a key diplomatic issue.

In an article published Tuesday by the Daily Memphian, Haney, a part-time Palm Beach resident and a member of Mar-a-Lago, said he was dining at Trump’s private club early last spring when Trump stopped by his table. With Trump was a top representative of the Qatar Investment Authority (QIA), the nation’s $320 billion sovereign wealth fund. Haney was trying to develop the Bellefonte Nuclear Generating Station in Hollywood, Alabama, a never-completed facility, and sell the power to his hometown of Memphis. He needed a slew of federal licenses and billions of dollars in funding to complete the deal. Trump, Haney says, knew about this venture, and during this encounter offered to help. “I know you’re working on this nuclear plant,” Trump said, according to Haney, explaining that the Qataris wanted to invest $45 billion in the United States. “They’ll loan money for nuclear plants.” Trump introduced Haney to the Qatari accompanying him.

Haney says he forgot the name of the Qatari official with Trump. But a person who had business dealings with the QIA around that time said it was likely Sheikh Ahmed bin Jassim bin Mohammed Al Thani, Qatar’s minister of economy and commerce and deputy chair of the QIA. Although Haney was vague on when this introduction happened, his description suggests it would have occurred on one of the last two weekends of March 2018, when Trump’s public schedule shows the president was at Mar-a-Lago.

Haney says that after this brief meeting with Trump and the Qatari, he traveled from Palm Beach, the home of Trump’s club, to Miami Beach in his 167-foot yacht, the Emelina. MarineTraffic.com, which tracks the location of ships, shows that the Emelina was docked in Miami from April 2 through April 7. That week, Qatar hosted the first “Qatar-US Economic Forum” in Miami Beach, taking pitches from Americans seeking capital from the QIA.

It was during Haney’s stay in Miami that Cohen inserted himself into the nuclear project. Haney says that Cohen, whom he had first met weeks earlier, showed up uninvited at the marina where his yacht was docked and asked to come aboard. Haney told the Daily Memphian that he invited Cohen to spend the night on the boat because “he’s the president’s lawyer.” Haney and Cohen subsequently met with Al Thani, the deputy QIA chair, at Qatar’s economic forum in Miami, as Mother Jones has previously reported.

Haney says he was impressed by the Qataris’ deference to Cohen. “He was treated like royalty with the Qataris because he was the president’s lawyer.” He decided after that experience to hire Cohen to close the deal on a QIA investment. Haney notes that he initially paid Cohen $200,000 under a three-month contract. But Haney ended the deal following a federal raid just days after the Miami meeting that targeted Cohen and disclosed an advanced federal investigation into Cohen’s activities. According to the Wall Street Journal, Haney agreed to pay Cohen $10 million if he successfully obtained funding for the Bellefonte project. Cohen, who has been cooperating with federal prosecutors, has pleaded guilty to crimes that include lying to Congress and campaign finance violations, which he says he undertook at Trump’s direction. He has been sentenced to three years in prison.

The nature of Cohen’s relationship with the Qataris is murky, but public accounts suggest he sought to profit by connecting the QIA with American investors seeking capital for real estate and infrastructure projects. Ahmed al-Rumaihi, then the head of a QIA branch, has claimed that in a December 2016 meeting, Cohen requested a $1 million upfront payment from Qatar for his help finding American investment partners. (Cohen has denied seeking a $1 million fee, but his work with Haney suggests he did attempt to broker deals involving the fund.)

Haney ended up not receiving Qatari backing and continues to seek funding for his nuclear project. He told the Daily Memphian that Cohen was a “crook” and a “con man” who “didn’t bring anything” to the deal. The businessman insists he paid Cohen to pursue the Qataris, not for access to Trump.

But Haney’s account raises questions, in particular whether his hiring of Cohen was related to Trump’s intervention. His version of events also raises new questions about Trump’s handling of US relations with Qatar and other Gulf states.

The officials overseeing the QIA in the United States hold top diplomatic posts. That makes it difficult to distinguish the country’s foreign policy from the fund’s investment strategy. And the Qataris had good reason to heed any Trump request to become involved in a specific project. In April 2018 and for much of the prior year, Qatar was aggressively courting Trump and his confidantes, eager to convince the president to drop his support for a blockade that Qatar’s neighbors, led by Saudi Arabia and the United Arab Emirates, imposed on it in 2017 because of the country’s alleged support for terrorist groups. Since Trump’s election, Qatar had touted plans to boost its US investments.

On April 10, 2017, just after the Qatari conference in Miami, Trump hosted Qatar’s emir, Sheikh Tamim bin Hamad Al Thani, in the White House. Trump rewarded his guest by backing off his prior charges that the country supports terrorists and praising Qatar for cracking down on terrorist financing.

If Haney’s account is correct, Trump urged Qatar to finance a private business deal being put together by a major Republican donor at the same time Qatar was seeking to win Trump’s support on a key diplomatic issue. This seemingly simple move contained great potential for mutual back-scratching that would directly benefit a businessman who was underwriting Trump’s political machine.

Manhattan prosecutors are investigating whether Trump’s inaugural committee illegally received foreign donations provided by American straw donors, and they appear to be eyeing contacts between inaugural donors and officials from several different countries, including Qatar. The Wall Street Journal reported this month that the prosecutors have asked Haney for information about his inaugural donation.

Was Trump’s alleged attempt to assist Haney in finding Qatari financing connected to Haney’s donations? Was Cohen’s work connected to Trump? Was Trump leaning on a foreign power that wanted his help? Haney, the White House, and Qatar’s embassy did not respond to requests for comment.