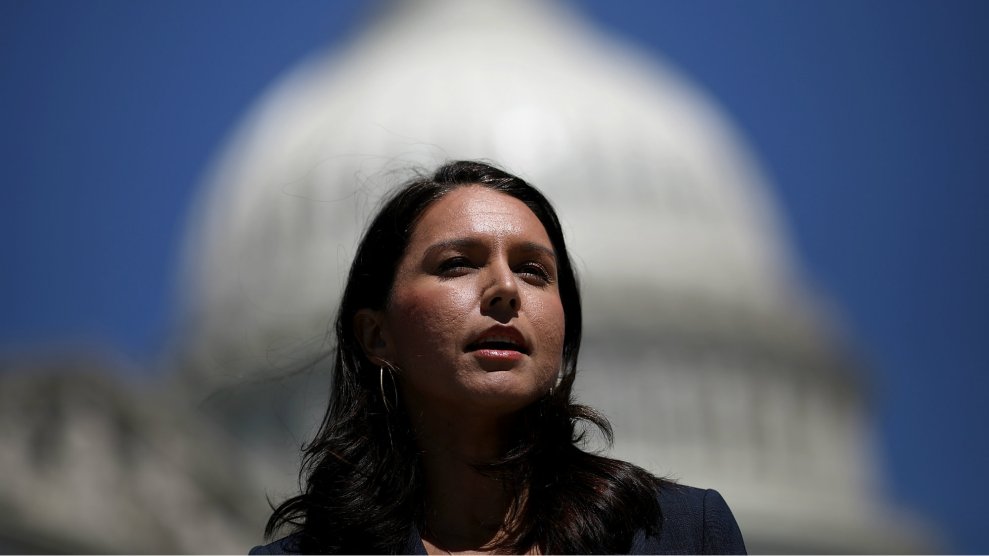 Since launching her campaign for president on January 11, Rep. Tulsi Gabbard (D-Hawaii) has had to weather one controversy after another, from a shake-up in her campaign leadership to resurfaced allegations of her ties with nationalists and foreign autocrats.

On Twitter, the former Ku Klux Klan grand wizard embraced Gabbard as a “candidate who will actually put America First rather than Israel First.” Gabbard immediately condemned his apparent support in a statement that drew attention to her prior disavowals of him. “I have strongly denounced David Duke’s hateful views and his so-called ‘support’ multiple times in the past, and reject his support,” she said.

Duke has long been a fan of Gabbard. After Trump’s election, he featured an article on his website that advocated for her to be secretary of state—with some reservations. “It’s not that she’s perfect. It has been noted that she at the very least pays lip-service to Israel,” Duke associate Patrick Slattery wrote. When Duke tweeted out the article that month, Gabbard rejected his support. “No thanks. Ur white nationalism is pure evil,” she tweeted.

During her six years in Congress, Gabbard has drawn criticism for defending unsavory figures like Syrian leader Bashar al-Assad, whom she defended against allegations that he had deployed chemical weapons against his own citizens in 2017. A year earlier, the congresswoman visited Assad in Syria during a trip that spawned wide public backlash. As Mother Jones reported last month:

Gabbard was accompanied on the trip by two officials of a “political party and paramilitary organization founded in Lebanon in 1932, and currently actively engaged in the Syrian civil war on the side of the Assad regime,” according to an investigation by the Daily Beast. Her office said the trip was sponsored by an Ohio-based group, but the funds came from one of the party officials who accompanied Gabbard, Bassam Khawam. Khawam, a longtime Assad ally in the United States, is an official in the Syrian Social Nationalist Party (SSNP), which has a history of domestic violence at home in Lebanon, including the assassination of the country’s first prime minister in 1951. More recently in Syria, the SSNP has sent between 6,000 and 8,000 fighters across the border, as the Daily Beast described it, “to help the Assad regime annihilate its opponents, to whom the SSNP officially refers as the ‘Jews of the interior’ and ‘an essential arm of the racist Jewish enemy.’”

Gabbard eventually paid back the costs for the trip.