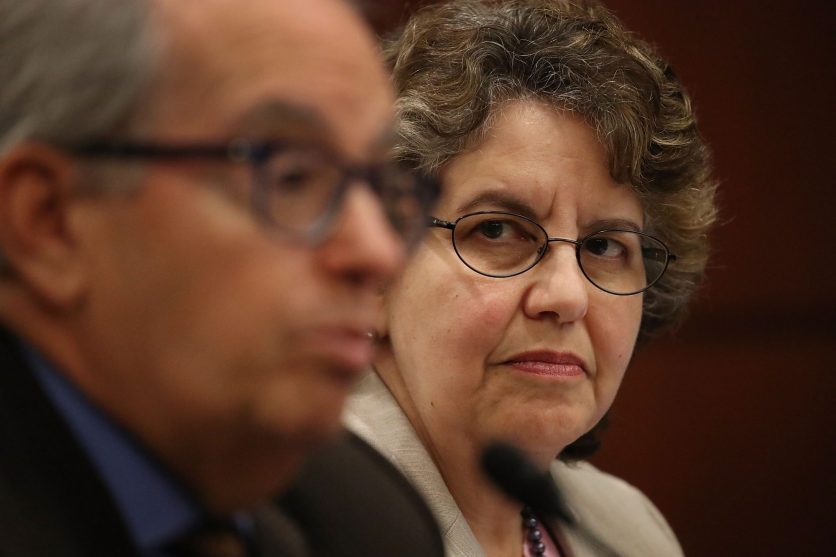 Fed up with the Federal Election Commission’s gridlock that has given violators of election law a free pass, the agency’s new chair says she won’t allow FEC lawyers to defend the government when the FEC has been sued for not enforcing the law. This drastic step, which one former FEC lawyer called the “nuclear option,” is effectively an effort to sabotage her own agency in order to enforce the law and create more campaign finance disclosure.

Ellen Weintraub, a commissioner with the agency since 2002 who became chair in January, has become increasingly frustrated by the FEC’s lack of enforcement of the law, which has led to less disclosure, less transparency, and more dark money within the campaign finance system. According to former FEC Commissioner Ann Ravel, “dysfunction and deadlock” have reigned supreme at the FEC for the past decade, with the agency “failing to enforce campaign finance laws.”

The gridlock at the FEC is partially to blame for the more than $900 million in “dark money” that has flowed into US elections from undisclosed sources since the 2010 Supreme Court Citizens United ruling, which gave corporations, nonprofits, and unions the ability to spend unlimited amounts of money to influence elections. A 2018 Pew Research poll found that 77 percent of Americans want limits on the amount individuals and organizations can spend on political campaigns.

The FEC is supposed to have six commissioners at all times, but there are currently only four: two Republicans, one independent, and Weintraub, a Democrat. Each commissioner is appointed to a six-year term by the president and confirmed by the Senate, but every one of the current commissioners was appointed more than a decade ago by former President George W Bush.

Former President Barack Obama successfully nominated just two commissioners during his administration, and both have since left; President Donald Trump has nominated just one, who has yet to be confirmed by the Senate. Because four votes are needed for the agency to take action on any matter, any one commissioner’s veto can grind the FEC to a halt.

As of May, the FEC’s current four commissioners will have been on the commission for a total of 36 years longer than they should have been, serving expired terms and waiting to be replaced.

The FEC chairmanship, which rotates among the commissioners each year, is mostly a ceremonial role without any real power. But Weintraub plans to use her veto power to stop the FEC from defending itself in court, since the agency needs four votes to initiate a legal defense.

So what happens when the FEC gets sued and is not authorized to defend itself, as Weintraub plans? “It has not happened in the history of the agency,” she told Mother Jones.

Four campaign finance lawyers, including three who used to work at the FEC, confirmed to Mother Jones that Weintraub’s new strategy was unprecedented and could lead to significant changes to the campaign finance system, depending on how the courts respond.

“I find myself in the odd position of sometimes rooting for us to lose,” Weintraub said. That’s because the FEC is stuck in a rut of failing to take action on campaign finance violations. The agency’s partisan divide is to blame. There has been a dramatic increase in the number of deadlocked votes on major cases since 2006, resulting in a lack of enforcement and significantly lower penalties. Typically, Weintraub and the independent commissioner vote to take action and the two Republicans vote not to. Without four votes in favor, the case is dismissed.

That’s what opens the door to a lawsuit against the agency. Many recent lawsuits against the FEC have occurred after an organization was accused of violating campaign finance disclosure rules for spending money without saying where that money came from.

Individuals and groups wanting greater disclosure have sued the FEC when it doesn’t hold organizations responsible for their dark-money expenditures. These are the cases that aggravate Weintraub most, and the ones she’s hoping to change.

“I find myself in the odd position of sometimes rooting for us to lose,” Weintraub said.

Noah Bookbinder, the executive director of watchdog group Citizens for Responsibility and Ethics (CREW) in Washington, says the commission’s Republicans have been outspoken in their ideological belief that there are “too many campaign finance laws and that they restrict free speech and democracy.” Republicans have typically cited the First Amendment in explaining their opposition to campaign finance laws. The Republican vice chair of the commission, Matthew Petersen, did not respond to requests for comment.

Ravel, the former FEC commissioner, backs Weintraub’s use of the nuclear option. “I’m glad she’s finally recognizing how frustrating and difficult it is to actually accomplish what is the enforcement of the law,” she says.

More than a third of the current litigation against the FEC has been filed by CREW. It is one of the few organizations that have successfully sued the FEC in the past. Last year, it won a suit against the FEC and Crossroads GPS, a super-PAC supporting Republican politicians co-founded by Karl Rove. “We would be thrilled if the FEC actually enforced the law and we didn’t have to file lawsuits at all,” says Bookbinder.

There are two possible outcomes when the FEC gets sued by an organization like CREW and doesn’t defend itself. One is that the respondent in a complaint (like Crossroads GPS) or the Justice Department intervenes and succeeds in defending the FEC’s decision not to enforce the law. In this case, nothing happens and the FEC continues not to enforce the law.

A second outcome is that the organization suing for greater disclosure (like CREW) wins and the FEC is ordered by the court to reconsider its decision in order to comply with the law. But when that’s happened in the past, Weintraub said in a statement last year, Republican commissioners have made tiny tweaks to the FEC’s decision to comply with the court order but essentially “block[ed] meaningful enforcement of the law.”

So Weintraub says she might pursue a second nuclear option: refuse to comply with the court order. That would likely prompt an independent lawsuit (say, by CREW against Crossroads GPS), which would enable the court to bypass the FEC and directly decide whether the organization hiding its donors broke the law. If so, it could force that entity to register as a political committee and disclose all its donors.

According to the former FEC employees, the courts have historically given deference to the FEC’s discretion over whether to enforce the law. But if the FEC stops defending itself in court, that deference is diminished.

“Court challenges to FEC enforcement of the law are very difficult to win,” says Adav Noti, a senior director at the nonpartisan Campaign Legal Center and a former lawyer at the FEC. “But if the government stops defending itself, it should be more frequent that the court finds that the law has been violated, which will make it harder for super-PACs and megadonors and the like to evade campaign finance law. So there’s significant potential for greater campaign finance disclosure, more transparency, and less dark money.”