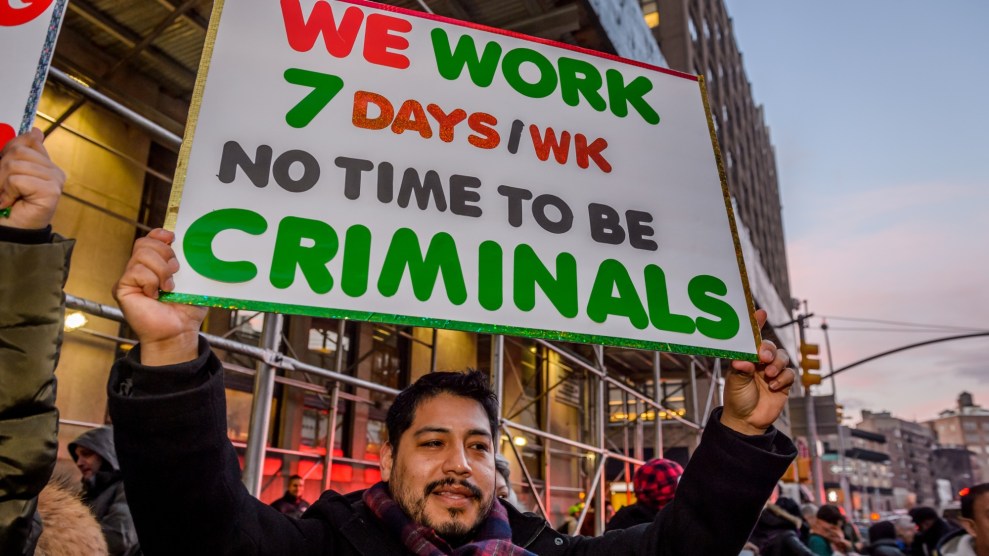 In April 2018, employees at a meatpacking plant in small-town Tennessee had just started what seemed like a normal day at work when they were suddenly rushed by dozens of armed Immigration and Customs Enforcement agents. Helicopters circled the building from above. The employees, mostly Latino immigrants, were ordered to stop working and put their hands in the air, and many were restrained with plastic zip ties. Some had guns pointed at them and were called racial slurs. After getting in a lineup, they were driven to a National Guard armory to be questioned and fingerprinted and were detained for many hours.

These are among the allegations detailed in a class-action lawsuit filed Thursday by the Southern Poverty Law Center on behalf of seven Latino employees detained at the meatpacking plant in what the suit claims was the largest workplace raid in nearly a decade. Approximately 100 workers were arrested on immigration charges.

The suit alleges that the raid violated the plaintiffs’ civil rights, as well as their Fourth Amendment right to be free from unreasonable search and seizure and excessive force and their Fifth Amendment right to equal protection. The plaintiffs in the suit had been working at the plant for a combined 38 years at the time of the raid. The suit alleges that the agents’ goal was to detain everyone who appeared to be Latino in the plant, even without individual search warrants. It further claims that the officers didn’t question the workers’ immigration status until after detaining them.

“The law is clear that seizures based entirely on race or ethnicity, arrests without probable cause, and the use of excessive force are prohibited by the Fourth and Fifth Amendments,” the lawsuit, which names as defendants several ICE agents allegedly present during the raid, says. “The federal officers conspired to plan and execute the forceful and prolonged seizure of the Plant’s Latino workforce solely on the basis of their actual or apparent race or ethnicity.” The lawsuit also notes that of the arrested workers, only 11 were actually charged with a crime.

The federal investigation of the plant was sparked by an Internal Revenue Service inquiry into the owner of the plant for alleged tax and immigration violations. The lawsuit alleges that the search warrant only authorized the seizure of specific items and not the detention of individuals.

Workplace raids have grown more common as part of the president’s immigration crackdown. I wrote in July about the children who are affected when their parents are detained (as of that story, at least 160 children had a parent that was arrested in the Tennessee raid):

Raids first became popular under Bill Clinton and continued with George W. Bush, who was under pressure from his Republican colleagues to be tougher on immigration as more people began to cross the border. The tactic stagnated under the Obama administration, which instead focused its efforts on auditing employers’ hiring practices to ensure they complied with federal law.

Now, the raids last seen in the mid-2000s are resurging under Trump. In January, ICE agents targeted nearly 100 7-Eleven convenience stores across the country, resulting in 21 arrests. In April, the agency took on a bigger target, raiding a meatpacking plant in Tennessee and arresting 97 undocumented immigrants. Last month, the feds made their way north to Ohio for two huge raids that collectively resulted in more than 250 arrests—one at a gardening company and another at a meatpacking plant, which was the biggest workplace raid since the Bush years, according to immigration experts.

You can read the full lawsuit below: