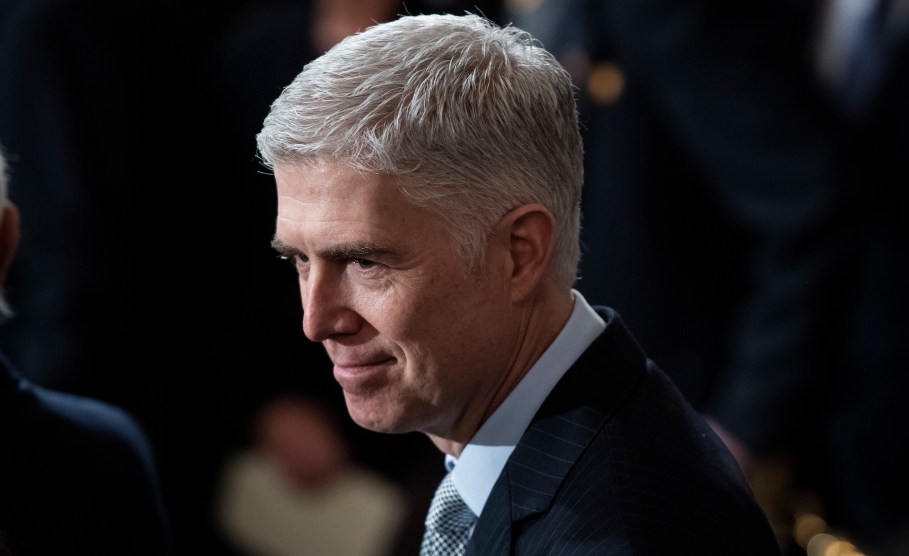 On Friday, President Donald Trump made good on his threat to declare a state of emergency so he could use a “military version of eminent domain” to start seizing private land along the southern border to build a wall. But Trump’s border wall still faces a host of thorny legal obstacles. Foremost among those might be one of his own making: his first Supreme Court appointee, Justice Neil Gorsuch.

Building an actual wall along the southern border will require the federal government to seize thousands of acres of private land, mostly in Texas. The government’s seizure of private land through eminent domain is hugely controversial, but the Supreme Court has largely given the federal government free rein to use it widely so long as private landowners are compensated for their losses. The most recent decision reaffirming that power is Kelo v. City of New London, decided in 2005, in which the court upheld the right of the government to seize private land and give it to a private party for redevelopment.

According to emails released during his confirmation hearing, Gorsuch thinks Kelo was wrongly decided, and court watchers have taken that as a sign that he might be highly skeptical of claims by the Trump administration that its declaration of an emergency would authorize the mass seizure of private land. “It’s clear that Gorsuch values constitutional property rights far more than Trump does,” says Ilya Somin, a libertarian law professor at George Mason University and the author of a book on the Kelo decision.

Kelo was a close 5-4 decision, with swing justice Anthony Kennedy joining the liberals in the majority. Conservatives, on the other hand, saw the decision as government overreach. Justice Clarence Thomas wrote a fiery dissent, observing, “Something has gone seriously awry with this Court’s interpretation of the Constitution. Though citizens are safe from the government in their homes, the homes themselves are not.”

At the time of the decision, Gorsuch was working in the George W. Bush Justice Department. Thomas’ dissent inspired him to email colleagues who’d clerked for Thomas. He wrote, “I am blown away by Thomas’ dissent. Brilliant stuff that completely demolishes the majority. Reminds us of the plain textual meaning of the Constitution and then breathes life and vital purpose into it, explaining the weaknesses of misguided judicial glosses.”

The emails weren’t released publicly until after Gorsuch was nominated, so it’s unlikely Trump knew about them when he selected Gorsuch for the court. He might have had second thoughts about his nominee if he had. As a real estate developer, Trump was a big fan of eminent domain. As Mother Jones reported last month:

[I]n the early 1990s, he convinced New Jersey’s Casino Reinvestment Development Authority to use eminent domain to condemn the house of a retired woman who lived next to Trump Plaza in Atlantic City. Trump wanted to turn her house into a limo parking lot. Vera Coking, who’d lived in the house for more than 30 years, had refused to sell to Trump. She fought back, sued, and kept her house. The lawsuit didn’t dampen Trump’s enthusiasm for government land seizures, though, especially those on behalf of private developers like him.

Today’s Supreme Court looks very different from the one that decided Kelo. There are six new justices, including a new chief justice, John Roberts, and Gorsuch, who replaced Antonin Scalia in 2017.* It’s hard to know how the Roberts court might view an eminent domain case stemming from Trump’s emergency declaration, where the conservatives’ natural tendency to support executive power would come into conflict with their views on government overreach and the sanctity of private property. But it does seem likely that the Kelo ruling might have gone the other way if Gorsuch had been on the court in 2005 instead of a more moderate justice like Kennedy. And that doesn’t bode well for Trump.

The border wall cases are also very different from those litigated in Kelo. In 2006, Congress authorized the Bush administration to construct nearly 700 miles’ worth of border fencing, a project that generated more than 360 eminent domain lawsuits, about a fifth of which are still being litigated. As it turns out, American citizens don’t like it very much when the government tries to take the land out from under them, especially in Texas, where some families along the border have ties to the land that date back to the 1700s. The legal difficulty of seizing all that land is one reason why more of the fencing hasn’t already been built, even though Congress has exempted the project from a host of environmental protections and other laws that might slow its development.

If Trump had won congressional funding and authorization to build more segments of the border wall, there wouldn’t have been much private citizens could do to save their land from seizure other than to litigate the amount of compensation they got in return. (The government is famous for lowballing its payments.) It’s not clear that many of those cases would have made it to the Supreme Court because so much of that law is settled.

But the government’s use of eminent domain has to be authorized by the legislature, which isn’t the case with Trump’s emergency declaration. Somin says that because Trump unilaterally declared an emergency to build the wall, he’s raised a whole mess of other legal issues that haven’t been settled. “Is there really an emergency power that can authorize these takings?” he asks. He’s not really sure how Gorsuch would rule in a case that would answer that question. A Supreme Court case would really be “about the scope of executive power, about whether that power exists at all,” he says. Either way, Somin notes, “It’s fair to say that Gorsuch would likely be more skeptical than Trump would about the power of the government to do this kind of thing.”

Correction: An earlier version of this article misstated which justice Gorsuch replaced.