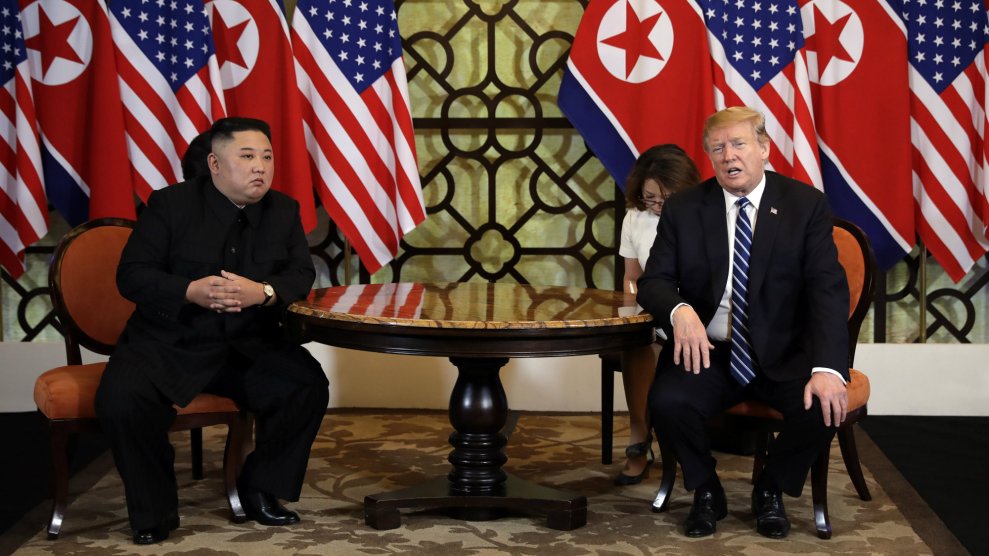 But at the conclusion of his second summit with Kim today, he adopted the brutal dictator’s talking points when asked about Warmbier’s mysterious death in 2017.

“I don’t believe he would have allowed that to happen,” Trump said. “He tells me that he didn’t know about it and I will take him at his word.”

President Trump on Otto Warmbier: "I really believe something very bad happened to him, and I don't think that the top leadership knew about it…(Kim Jong-Un) felt very badly about it…He tells me that he didn't know about it, and I will take him at his word." pic.twitter.com/EWnw7BzVNe

Warmbier was taken prisoner by Kim’s regime in early 2016 for allegedly stealing a framed propaganda poster from his hotel. Upon his return to the United States more than a year later, he was in a “vegetative state” after enduring significant brain damage, the New York Times reported. Warmbier’s parents decided to take him off a feeding tube shortly after his return. While an initial coroner’s report did not show clear signs of torture, Warmbier’s family has not been shy about pinning the blame for his treatment on Kim and North Korea writ large, where the United Nations has said torture is an “established feature of the interrogation process.”

“They’re terrorists. They kidnapped Otto,” Warmbier’s father told Fox News in September 2017. “They tortured him. They intentionally injured him. They are not victims.”

Trump echoed that same rhetoric in a tweet claiming Warmbier was “tortured beyond belief” by Kim’s regime:

Great interview on @foxandfriends with the parents of Otto Warmbier: 1994 – 2017. Otto was tortured beyond belief by North Korea.

During his first State of the Union address last year, guests included North Korean defector Ji Seong-ho and Warmbier’s parents. During his speech, Trump said, “No regime has oppressed its own citizens more totally or brutally than the cruel dictatorship in North Korea.”

But all that has changed. Trump’s about-face on Warmbier’s imprisonment comes amid a broader strategic shift in how the administration has approached North Korea. After having once threatened the country with “fire and fury,” Trump has now met twice with its reclusive leader within a year. (Their latest summit this week in Hanoi ended early after Kim refused to meet US demands to destroy his nuclear weapons.) As Trump’s praise of Kim—”my friend” and a leader who “loves his people“—has ratcheted up, his once-frequent mentions of the country’s human rights record have receded.

In fact, the ghastly conditions of North Korea’s prisons were, in Trump’s telling, even more reason to believe that Warmbier’s mistreatment was a matter of circumstance rather than the result of direction from Kim.

“Those prisons are rough. They’re rough places,” Trump said. “[Kim] knew the case very well, but he knew it later. And you got a lot of people. Big country.”