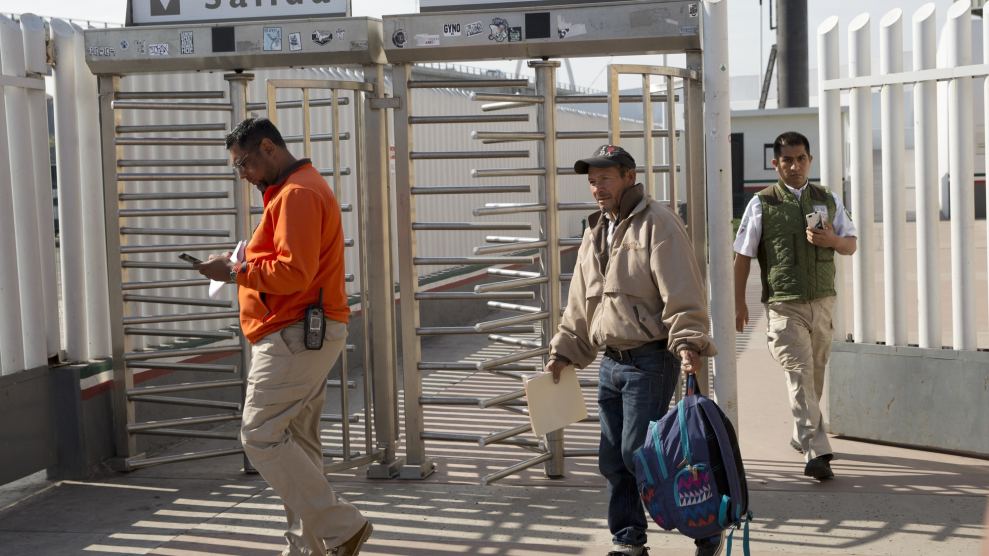 Mexican officials escort Carlos Catarldo Gomez, of Honduras, center, after he became the first asylum-seeker returned to Mexico by US officials in January.Gregory Bull/AP

Lawyers fighting to stop the Trump administration from requiring Central American refugees to spend months waiting in Mexico had their first day in court on Friday. The lawsuit, brought by the ACLU and other immigrant rights group on behalf of 11 asylum-seekers, argues that the so-called “Remain in Mexico” policy threatens migrants’ lives by forcing them to wait in some of the world’s most dangerous cities.

Lawyers for the ACLU—along with the Southern Poverty Law Center and the Center for Gender and Refugee Studies—are asking San Francisco-based federal Judge Richard Seeborg to block the new rules. “The policy on its face is wrong,” the ACLU’s Judy Rabinovitz said in court Friday. “It’s illegal. It’s unreasonable.”

At issue in the case is whether Trump has the statutory authority to implement the policy and whether the administration is violating non-refoulement, a principle in international law that prevents countries from forcing migrants to return to places where they might be subject to persecution, torture, or death. Rabinovitz also argued that the policy provides insufficient protections for migrants who fear being sent to Mexico—they are not guaranteed access to an interpreter or a lawyer to make their case, and they have almost no opportunity to appeal the initial decision, as would be the case in regular removal proceedings. “The process completely turns the whole notion of protection on its head,” said Rabinovitz. “Nobody can pass this screening.”

Scott Stewart, the attorney representing the government, insisted that the policy was needed to deter “baseless asylum claims” that were “overtaxing” US authorities. Many asylum-seekers, he noted, do not show up to their hearings after entering the country, and even those that do show up have increasingly been denied. The guidance for assessing asylum claims, Stewart said, “is being applied in a reasonable, modest way.” He also insisted that the government has the authority to institute the policy and argued that because it applies to migrants fleeing Central America rather than Mexico, it does not run afoul of international law.

Seeborg, a Barack Obama appointee, did not make any decisions on the spot. He seemed to be weighing whether to impose a limited injunction—protecting just the plaintiffs in the case—or a broader injunction. He also pressed Stewart on what fixes the administration could make to improve the asylum process.

Here’s what you need to know about the controversy swirling around the Remain in Mexico policy:

A record number of migrant families—mostly from Guatemala and Honduras—have been turning themselves in to US Border Patrol agents to seek protection under US asylum laws. Almost all of them are quickly released to live within the United States while their cases are pending because the government has little capacity to detain families and can legally detain children for only about 20 days. The Trump administration sees this as a “loophole” that allows people without valid asylum claims to enter the country and then potentially skip their court dates.

To deter asylum-seekers from crossing the border, Homeland Security Secretary Kirstjen Nielsen announced in December that the administration would begin forcing asylum-seekers to wait in Mexico while their cases are decided by US immigration judges, a process that takes months and potentially years. Mexico says the new process was the result of a “unilateral” decision by the United States but is accepting asylum-seekers sent back under the policy.

The Remain in Mexico policy, officially called the Migrant Protection Protocols, began in late January at the San Ysidro border crossing between San Diego and Tijuana and has now expanded to Calexico, California, and El Paso, Texas. Migrants who crossed the border near San Diego without authorization have also been sent back. The Department of Homeland Security hopes to enforce the policy across the entire southern border. DHS officials said earlier this month that 240 asylum-seekers had been returned to Mexico.

How does it work?

Some, but not all, asylum-seekers who request protection at places where Remain in Mexico is in effect are issued US immigration court dates and then sent back to wait in Mexico. They come back to official ports of entry on the days of their hearings, are taken to court, and then returned to Mexico again. The process repeats itself until asylum-seekers win or lose their cases.

So far, the process has been predictably dysfunctional. As Mother Jones reported on Thursday, the new policy is making immigration hearings more chaotic and numerous logistical issues have not been worked out. At the first Remain in Mexico hearings last week, a government scheduling “glitch” led to some asylum-seekers’ missing their court dates. A US Immigration and Customs Enforcement attorney responded by unsuccessfully trying to get a judge to summarily rule against the migrants’ asylum claims.

How important is the policy to Trump’s immigration agenda?

Very. Border Patrol agents stopped more family members between October and February than during any full year on record. The Trump administration has exhausted most of its short-term options for trying to deter Central Americans from seeking asylum in the United States. Remain in Mexico is its best hope of changing that, since most Central American asylum-seekers do not end up winning their cases. Asylum-seekers covered by the Remain in Mexico policy will be deported from the United States to their home countries if they fail to gain asylum. That contrasts with asylum-seekers released into the United States who sometimes become undocumented instead of completing asylum applications or complying with deportation orders. The Trump administration hopes that if claiming asylum usually leads to waiting for months in Mexico and then being denied asylum in the United States, fewer people will seek protection under US law.

Why do human rights groups and immigrant advocates oppose it?

The first problem with Remain in Mexico is that it puts asylum-seekers’ in danger by forcing them to wait in Mexican border cities. A record 2,518 people were murdered in Tijuana last year, and it was recently ranked as the world’s most violent city by the Citizens’ Council for Public Security and Criminal Justice, a Mexican nonprofit. The city’s murder rate was about 140 per 100,000 people in 2018, compared to about 5 per 100,000 in the United States. In December, two Honduran teens were murdered in Tijuana after they arrived there as part of a migrant caravan. The Citizens’ Council ranked Ciudad Juárez, which is across from El Paso and had a murder rate of 85 per 100,000, as the world’s fifth most dangerous city.

The second objection is that the policy will make it nearly impossible for asylum-seekers to have a fair shot at gaining protection from persecution in their home countries. Many asylum-seekers are unable to find lawyers to represent them pro bono from within the United States. Doing that while in Mexico will be even harder. Those who are lucky enough to get representation often won’t be able to meet with their attorneys face-to-face until the day of their hearing.

That’s what Friday’s hearing was all about. Stephen Legomsky, who served as the Obama administration’s chief counsel for US Citizenship and Immigration Services, the agency responsible for legal immigration, told Mother Jones in January that he believes there is no legal authority for the program:

But as Legomsky said, the provisions governing who can be denied entry to the United States are maze-like, and there are no guarantees Judge Richard Seeborg will agree that Remain in Mexico is illegal.

Asylum-seekers now have to wait to see how Seeborg rules. His decision could come very soon, and possibly within the next week.