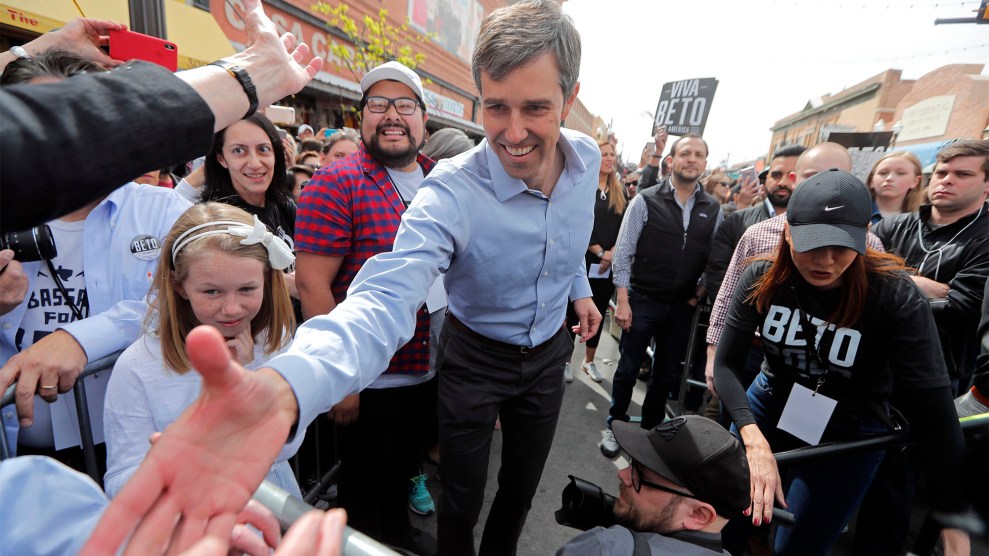 Beto O’Rourke officially kicked off his campaign for the Democratic nomination for president at a rally on Saturday in his hometown of El Paso, Texas, on the street that connects the US to Juarez, Mexico. The event comes at a time when the Trump administration is holding hundreds of migrants from Central America at a fenced-in, barbed-wire encampment under a bridge in the city, just blocks from where O’Rourke appeared. President Donald Trump this week announced he is considering closing the border with Mexico and would cut off aid to Guatemala, Honduras, and El Salvador.

O’Rourke, a 46-year-old former congressman and Senate candidate, sharply criticized Trump’s immigration policies in his speech, blasting the president for separating migrant children from their families. “We will find security not through walls, not through militarization,” he said. “Let’s not only follow this country’s asylum laws, let’s make sure we never take another child from their mother at their most desperate moment. Let us reunite every one of them.”

The Trump administration is holding more than 500 migrants a day under the El Paso Notre Bridge—located blocks from where O’Rourke spoke Saturday. One El Paso resident told the New York Times that the makeshift detention camp “looks like a concentration camp.”

The diverse crowd of a few thousand held signs reading “Viva Beto” and “This is Where We Make Our Stand.” O’Rourke gave a spirited dense of his hometown, which Trump falsely called one of the most dangerous cities in the country during his most recent State of the Union speech. (In fact, it’s one of the safest.) “We are safe because we are a city of immigrants and asylum seekers,” O’Rouke said.

O’Rourke has emerged as one of the sharpest critics of the administration’s immigration policies among the field of Democratic presidential contenders. In February, he held a counter-rally in El Paso when Trump campaigned in the city to build support for his proposed wall along the US-Mexico border. (The president falsely claimed at the time that O’Rourke drew “200 people, 300 people,” when the crowd was actually in the thousands.)

O’Rourke announced his campaign on March 14 and raised an impressive $6.1 million in the first 24 hours, more than Bernie Sanders—and far more than the other contenders. Recent polls have shown O’Rourke running in third or fourth place nationally, behind Sanders and former Vice President Joe Biden and about even with Kamala Harris.

The location of El Paso was symbolic in more ways than one. O’Rourke said his surprisingly close loss to GOP Sen. Ted Cruz in 2018 was proof that Texas could turn blue. “This state and its 38 electoral votes count like they’ve never counted before,” he said.

But Texas has long suffered from low voter turnout. To combat Republican-backed voter suppression laws, O’Rourke outlined an ambitious democracy reform agenda that included restoring the Voting Rights Act, ending gerrymandering, enacting automatic registration and Election Day registration, and getting big corporate money out of politics. “When voting rights are not expanded but functionally withdrawn, we become a democracy in name only,” he said.