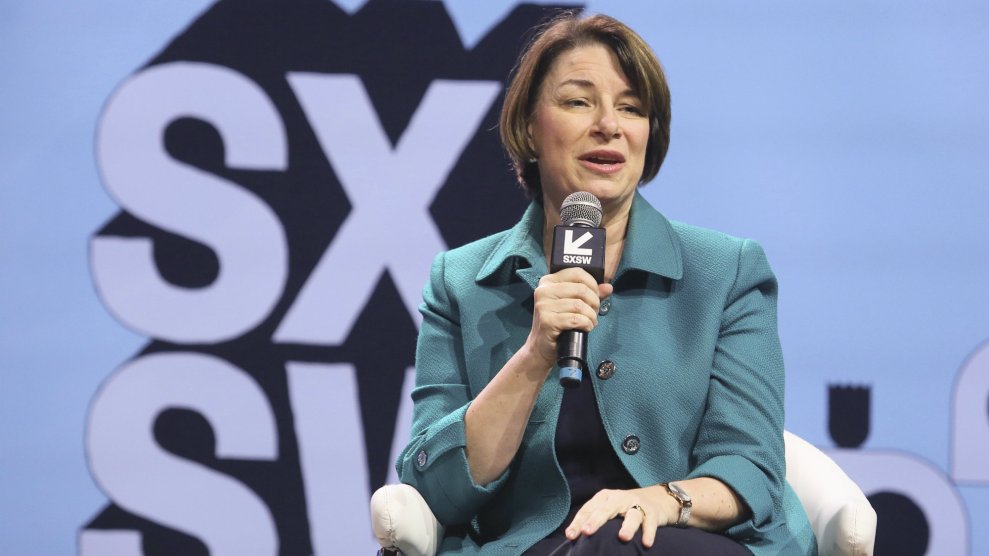 Presidential hopefuls are lining up in Austin, Texas, this weekend to appear at the trendy tech gathering known as South by Southwest (SXSW). The yearly weekend festival that features new technology, music, and film premieres attracts a young and liberal crowd that candidates are hoping they can win over.

Among the candidates and those who have not yet announced who spoke on Saturday were Senators Amy Klobuchar (D-Minn.), Elizabeth Warren (D-Mass.) and Howard Schultz, the former CEO of Starbucks who has floated the possibility of entering the race as a centrist independent.

Early on Saturday morning, in an on-stage interview with NBC News’ Dylan Byers, Schultz tried to persuade voters to support his independent bid by saying his candidacy would “disrupt the system with a centrist approach.” But as was the case in January when he initially suggested that he may run, he had a hard time explaining exactly what his approach would be. For instance, Schultz agreed it would be important to raise taxes on the wealthy, but he was unable to say by how much. He acknowledged that economic inequality should be fixed but provided scant details on how that can be achieved, only characterizing progressive plans to tackle inequality as “socialism.”

A few hours later, Senator Amy Klobuchar was interviewed by Kara Swisher, the co-founder of the tech-based website Recode. She has been dogged by reports of her verbal abuse and emotional torment of staffers during her tenure as the three-term senator from Minnesota. In one strange report, Klobuchar allegedly berated one of her staff members who failed to bring her a fork to use for her salad while they were on a plane. The senator supposedly then retrieved a comb from her purse and ate her salad with it—then demanded the staffer clean it.

At the festival, the senator admitted she briefly used the comb as a fork. When asked about her treatment of staffers and whether or not the negative press has been a part of the media’s sexist portrayal of women in power, Sen. Klobuchar replied, “I’m not going to go there. Whatever it is, I just can’t waste my time analyzing it, because the stakes are too high, and I care too much.”

During her time onstage when she was interviewed by Time magazine’s Anand Giridharadas, Sen. Elizabeth Warren sought to distance herself from democratic socialism and centrism. “Bernie has to speak to what democratic socialism [is],” she said  “And the centrists have to speak to whatever they are doing. What I can speak is to is how I am doing.” She then discussed her proposal to break up big, powerful tech companies like Facebook, Google, and Amazon. “The monopolist will make fewer monopoly profits—boo hoo,” she said of those who stand to lose money from her plan.

More Democratic hopefuls are expected to speak at the festival tomorrow, including Julian Castro, Obama’s Department of Housing and Urban Development Secretary, former Colorado governor John Hickenlooper, and Washington governor Jay Inslee, who is running as the nation’s first climate candidate. Even the long-shot candidates will be making an appearance. CNN will host a town hall broadcast from SXSW featuring Rep. Tulsi Gabbard (D-Hawaii), South Bend, Indiana mayor Pete Buttigieg, and former Maryland Congressman John Delaney. The former congressman from Texas’ 16th congressional district, Beto O’Rourke, received a standing ovation when he made an appearance at the screening for  “Running With Beto,” the documentary chronicling his unsuccessful bid to unseat Senator Ted Cruz. He has not yet announced his plans for 2020.