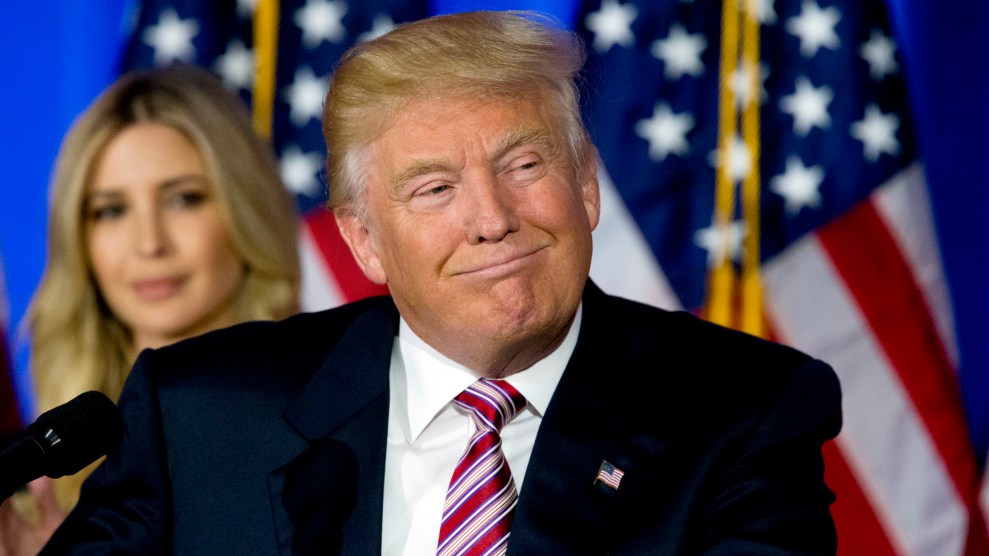 Democrats are opening another front in their effort to win the release of President Donald Trump’s tax returns. Their plan: Vote on legislation that would require the president and vice president, along with all future candidates for those offices, to disclose 10 years of business tax returns. At the urging of the Congressional Progressive Caucus, party leaders late Tuesday night agreed to add the provision to HR 1—the signature package of voting rights, campaign finance, and ethics reforms that is scheduled for a vote on Friday.

In its original form, the bill, dubbed the “For the People Act,” would have only required those officeholders and candidates to release 10 years’ worth of personal tax returns. That would have exempted any returns filed by Trump’s more than 500 business entities. Progressive lawmakers—led by CPC co-chair Pramila Jayapal (D-Wash.) and Rep. Lloyd Doggett (D-Texas), who proposed the amendment—pushed hard for the change, pointing to the need to force politicians to disclose potential financial conflicts of interest. According to people familiar with the negotiations, the proposal received pushback from moderate Democrats, who suggested it could be an unnecessary invasion of privacy into the lives of candidates and their business partners. Working with Rep. John Sarbanes (D-Md.), the primary author of HR 1, Jayapal persuaded House leaders to add the business tax provision.

The inclusion comes a day after news broke that Rep. Richard Neal (D-Mass.), the chair of the House Ways and Means Committee, was preparing to request Trump’s tax returns using a 1924 law that gives that committee the power to obtain returns from the IRS. Trump is the first president since Gerald Ford not to have released any returns, and his allies have suggested that the president would wage a legal battle to prevent Congress from accessing the documents.

Neal reportedly has not decided whether his committee’s request will include the tax returns from Trump’s business interests or just his personal returns. But when Michael Cohen, Trump’s longtime lawyer, testified before the House oversight committee last week, Rep. Alexandria Ocasio-Cortez (D-N.Y.) helped lay the groundwork for demanding the business returns, asking Cohen whether it would be useful “for the committee to obtain federal and state tax returns from the president and his company” in order to investigate a New York Times report that Trump had participated in fraudulent tax schemes. Cohen said he believed the returns would indeed help the committee.

Two days before Cohen’s testimony, a third of the 96-member CPC sent a letter to House Speaker Nancy Pelosi (D-Calif.) asking for her to include Doggett’s provision in HR 1, which has largely skipped the typical markup process that would allow amendments to be introduced in committee. The letter built a case for releasing the business tax returns, noting that doing so could provide additional details about the president’s business partners and whether his businesses disproportionately benefit from any of his administration’s policies. “We’re very big supporters of HR 1, but there are a few areas where we think it can be strengthened,” Jayapal told reporters about the effort in January. “Specifically including the business tax returns is a piece of that.”

“Unless you get the business returns on Mr. Trump, you have a really incomplete record of his activity.”

“Unless you get the business returns on Mr. Trump, you have a really incomplete record of his activity,” Doggett tells Mother Jones. He notes that while current law gives Neal and his Senate counterpart the ability to demand the tax returns, the amendment to HR 1 would serve as a lens through which the public could view the returns of all future candidates.

Progressive House members involved in the amendment welcome it as an opportunity to shift a major Democratic agenda item further in their direction. Other progressive initiatives, like Jayapal’s Medicare-for-all bill, have stood alone as statements of policy priorities that are unlikely to get broad Democratic support, but by attaching those priorities to legislation that all Democrats are expected to vote for, they see an opportunity to push the entire House Democratic caucus to the left.

There’s little chance that HR 1 will actually become law before the 2020 election. Senate Majority Leader Mitch McConnell (R-Ky.) has said he won’t hold a vote on it—and even if he did, the White House has already issued a veto threat. But Democrats built the legislation with several other purposes in mind. In addition to sending a message about election reforms and Trump’s taxes and setting an agenda for a future president and Senate, they want the bill to establish ethical standards for their party’s 2020 presidential contenders.

A number of Democrats have already made moves in that direction. Sen. Elizabeth Warren (D-Mass.) authored an anti-corruption bill with Jayapal last year that would require the IRS to release the last eight years of presidential candidates’ personal tax returns, though that bill doesn’t outline any requirements for business interests. Warren and Sen. Kirsten Gillibrand (D-N.Y.) have released 10 years’ worth of their own personal tax returns, while Sens. Kamala Harris (D-Calif.) and Bernie Sanders (I-Vt.) have promised to follow suit.

The Democrats currently seeking the presidency don’t have substantial business holdings that compare to Trump’s, but Doggett believes they should still disclose the returns for any business entities they do control. He didn’t float his idea by any 2020 hopefuls, but he says he didn’t think he needed to. “I feel so strongly that this is something in which there’s legitimate public interest,” Doggett explains. “There could be some who aren’t as enthusiastic about it, but I don’t think it’s an unreasonable requirement, and almost everyone has made their personal returns public anyways.”