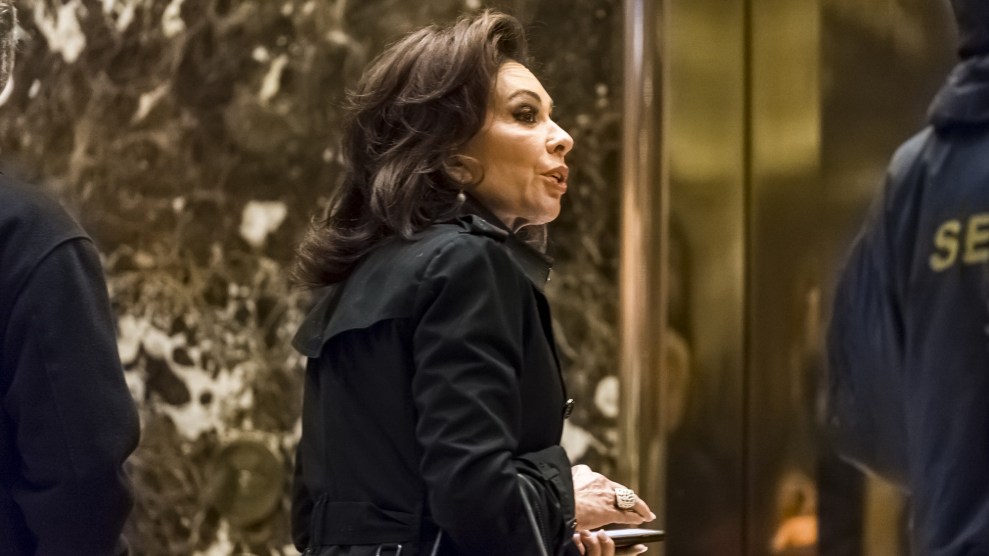 Jeanine Pirro in the Trump Tower lobby in 2017.Albin Lohr-Jones/picture-alliance/dpa/AP

Fans of Jeanine Pirro’s Fox News show, Justice with Judge Jeanine, would have been disappointed on Saturday night after the network did not air the series during its regular time slot. Included among them was President Donald Trump: On Twitter on Sunday morning, he called for Fox News to “bring back” the host. “The Radical Left Democrats, working closely with their beloved partner, the Fake News Media, is using every trick in the book to SILENCE a majority of our Country,” the president tweeted. “Fox must stay strong and fight back with vigor. Stop working soooo hard on being politically correct, which will only bring you down, and continue to fight for our Country.”

Pirro drew controversy last week after she suggested on the show that Rep. Ilhan Omar (D-Minn.) believed in Sharia law because she wore hijab, and that her beliefs put her at odds with the Constitution. Fox News condemned Pirro’s remarks, noting in a statement that her views “do not reflect those of the network.” On Saturday night, it re-ran an episode of a documentary series instead. The network has not commented on whether the show will air again next week. CNN reported Sunday morning that Pirro has been suspended, citing an anonymous source.

“My intention was to ask a question and start a debate, but of course because one is Muslim does not mean you don’t support the Constitution,” Pirro said in a statement on Monday.

Several companies, including NerdWallet, LetGo, and Allergan, which produces Botox, pulled their advertisements from Pirro’s show following the comments. But the controversy seems to have caused President Trump to double down on support for his favorite TV judge. As my colleague Pema Levy has reported, the host has an unusual amount of influence with the president:

Even at a network that more or less drafts Trump’s talking points, Pirro stands out for her influence. As Fox’s loudest voice on legal matters and a personal friend of Trump, she shapes his views on the defining issues of his presidency: the investigations into his inner circle, campaign collusion with Russia, and obstruction.

…The influence of Pirro and other Fox hosts has sometimes left White House staffers scrambling to control the damage. Trump’s aides have reportedly had to put out fires that Pirro lights; during her Oval Office meeting with the president last fall, Trump’s chief of staff, John Kelly, told Pirro that she wasn’t “helping things.” (Meanwhile, other top White House officials deliberately pushed Trump to spend more time watching Fox because he was growing so agitated by what he saw on CNN and MSNBC, New York magazine reported.) The White House press team appears to have incorporated Pirro’s show into its communications strategy, regularly dispatching spokespeople to appear on the show—partly because Trump is watching, according to the Washington Post, and partly to prevent the president from calling in himself, as he did earlier this year. Trump has also granted Pirro several exclusive interviews.”