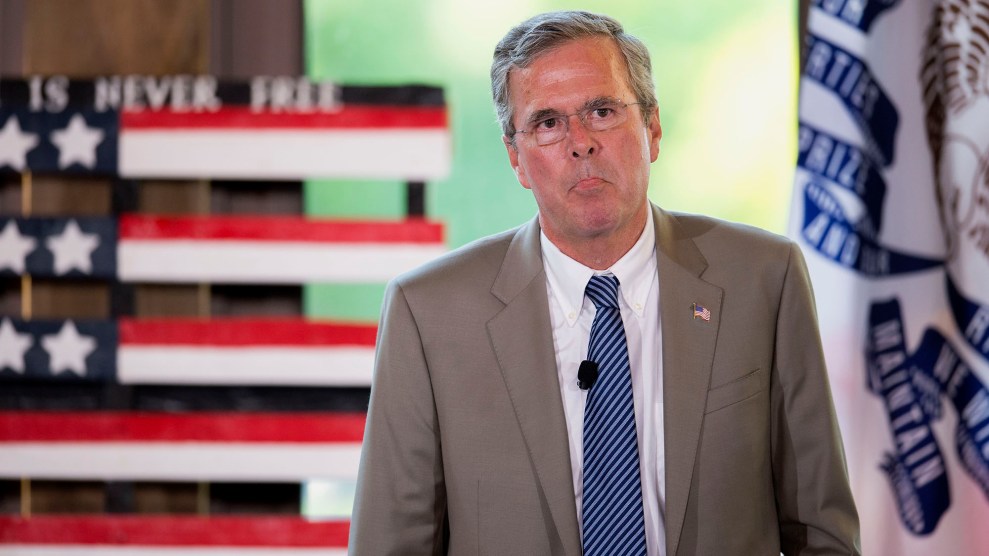 The Federal Election Commission has hit Right to Rise USA, the super-PAC that backed Jeb Bush’s 2016 presidential bid, with a record fine for accepting a seven-figure donation from a company owned by Chinese nationals who were in business with Bush’s brother, Neil, according to FEC documents obtained by Mother Jones. It is illegal for foreign nationals to be involved in making donations to political committees.

Neil Bush, who has extensive business dealings in China, solicited the $1.3 million contribution from American Pacific International Capital (APIC), an international investment holding company where Neil is a board member. Although the contribution to Jeb’s super-PAC came from the American arm of APIC, the company’s owners are Chinese, and Neil Bush initially solicited the money from two Chinese nationals—Gordon Tang, the chair of APIC, and Huaidan Chen, a board member. The FEC has fined APIC $550,000 and Right to Rise $390,000.

The total combined fine against Bush’s super-PAC and APIC, which has not previously been reported, is $940,000, the largest amount levied in a single case against anyone since the 2010 Citizens United ruling. The penalty is also the biggest fine that the FEC has ever handed down due to foreign national participation. “This is a big, big fine, one of the biggest fines in FEC history,” says Brendan Fischer from the Campaign Legal Center, a nonpartisan watchdog.

The FEC began investigating the APIC donations after CLC filed a complaint with the commission. CLC has not yet received notification from the FEC regarding the result of that complaint and the impending fines on Right to Rise and APIC. Fischer’s comments are based on a characterization of the FEC settlement that Mother Jones provided him.

“This illegal $1.3 million is a direct result of Citizens United,” Fischer says, since before that 2010 Supreme Court decision, companies could not donate unlimited amounts of money to super-PACs.

FEC regulations state that a “foreign national shall not direct, dictate, control, or directly or indirectly participate in the decision-making process of any…corporation…with regard to…election-related activities.” This includes decisions about making a contribution. Because Neil Bush was in communication with foreign nationals at APIC to solicit a donation, the law was broken.

“This is a big, big fine, one of the biggest fines in FEC history. This illegal $1.3 million is a direct result of Citizens United.”

CLC filed the complaint after reporting from the Intercept in 2016 showed that APIC and its foreign owners had made the $1.3 million contribution to Bush’s super-PAC in order to help “friends.” In an interview with the Intercept at the time, APIC’s director of public relations, Victoria Yu, said the company engages in politics to “influence in some way good or bad policies” and to “create a better environment” for doing business. The Intercept reported that Wilson Chen, an American citizen and executive director of APIC, “compared APIC’s political donations to the Chinese tradition of gong cha or paying tribute to the emperor.”

The FEC’s ruling against Right to Rise and APIC brings to light new information on how that donation came about. According to a legally binding conciliation agreement that Right to Rise signed with the FEC, which was obtained by Mother Jones, Neil Bush first broached the topic of APIC making a contribution to his brother’s super-PAC during a conversation he had with Tang in Singapore during a business trip. Tang stated at the time that APIC might be interested in contributing if it could do so legally.

Bush then sent an email to Wilson Chen and Huaidan Chen on February 21, 2015, following up on his conversation with Tang about getting a donation. Bush wrote that Tang had “expressed interest in donating legally through APIC to my brother Jeb’s political action committee.” He also wrote that  “[i]f Gordon wants to make a donation you ought to pass this by your legal counsel as well to be sure everything is done properly.” Neil attached to the email a copy of a Right to Rise legal memorandum written by the PAC’s lawyer, Charlie Spies, that outlined the rules on contributions from “Domestic Subsidiaries of Foreign Corporations to Federal Super PACs.”

On February 19, before this email exchange with Wilson and Huaidan, Neil called Spies asking how to legally solicit the contribution from Tang. Spies then sent him the same legal memorandum, but Bush did not follow its rules, as shown by the solicitation email he sent Wilson and Hauidan (a Chinese foreign national).

Spies told Mother Jones that “Right to Rise conciliated this matter to avoid costly litigation and appreciates the commission’s recognition of its extensive compliance efforts.”

Mark Irion, APIC’s spokesman, told Mother Jones that “APIC is agreeing to a very large fine and remains committed to complying with all campaign finance laws and regulations. You can read throughout the conciliation agreement their desire to do everything legally and properly but mistakes can be made even with the best of intentions. Their actions speak to their sense of taking responsibility.”

He added, “APIC did not want an ongoing investigation to burden its pending real estate transactions and made a cost of business decision to put this settlement behind.”

Neil Bush told Mother Jones through a spokesman: “I respect the decisions of both Right to Rise and APIC to enter into conciliation agreements with the FEC,” Bush wrote to Mother Jones. “I believed that my actions were both lawful and consistent with the legal advice that I sought. One hundred percent of the contributions I raised were from entities and American citizens who were legally eligible to contribute.”

But while the FEC clamped down on APIC and Right to Rise in this instance because the violation was recorded by Neil Bush in an email, other instances of foreign nationals funneling money to PACs may be harder to uncover. “Corporations being able to spend unlimited amounts of money in our elections opens the door to foreign influence,” Fischer says. “If the actors were a little more sophisticated, they could have avoided an FEC investigation. There’s every indication that this is the tip of the iceberg, that foreign money is coming into our elections through nonprofits and corporations, but without any detection.”