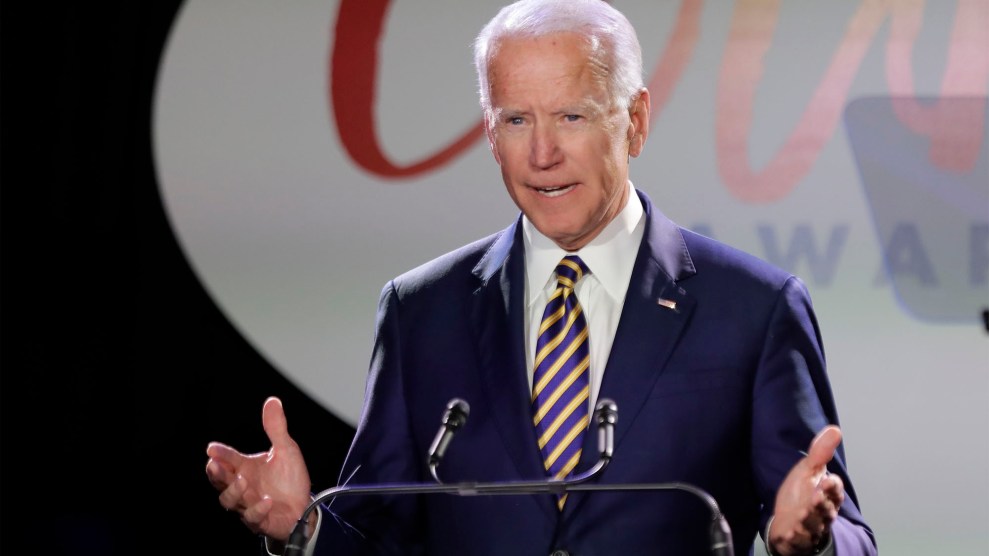 Former Nevada State Rep. Lucy Flores (D) accused former Vice President Joe Biden of touching her inappropriately when he campaigned for her in 2014. Before a campaign event for Flores’ lieutenant governor bid, Biden allegedly came up to her from behind, put his hands on her shoulders, smelled her hair, and kissed her on the back of the head.

“He made me feel uneasy, gross, and confused.”

“Biden was the second-most powerful man in the country and, arguably, one of the most powerful men in the world,” Flores wrote in New York magazine on Friday. “He was there to promote me as the right person for the lieutenant governor job. Instead, he made me feel uneasy, gross, and confused. The vice-president of the United States of America had just touched me in an intimate way reserved for close friends, family, or romantic partners—and I felt powerless to do anything about it.”

Biden’s office disputed Flores’ accusations, saying in a statement: “Neither then, nor in the years since, did he or the staff with him at the time have an inkling that Ms. Flores had been at any time uncomfortable, nor do they recall what she describes.”

On Saturday, several Democratic presidential candidates were asked about the allegations after a forum in Iowa. “I read the op-ed last night,” Sen Elizabeth Warren (Mass.) told reporters. “I believe Lucy Flores. And Joe Biden needs to give an answer.”

“I believe Lucy Flores,” said former Housing and Urban Development Secretary Julian Castro. “We need to live in a nation where people can hear her truth.”

And here’s Julian Castro on the same question about Joe Biden pic.twitter.com/dTL1yLW8UA

Time passed and pictures started to surface of Vice-President Biden getting uncomfortably close with women and young girls. Biden nuzzling the neck of the Defense secretary’s wife; Biden kissing a senator’s wife on the lips; Biden whispering in women’s ears; Biden snuggling female constituents. I saw obvious discomfort in the women’s faces, and Biden, I’m sure, never thought twice about how it made them feel.

Biden’s behavior and record on women’s issues is likely to attract major scrutiny should he decide to run for president in 2020. “Flores’s experience isn’t unique,” wrote Laura McGann of Vox on Friday. “It is no secret in Washington that Biden has touched numerous women inappropriately in public. It’s just never been treated as a serious issue by the mainstream press.”

Biden’s treatment of Anita Hill when she testified against then-Supreme Court nominee Clarence Thomas in 1991 is also likely to be a major vulnerability for him. As chairman of the Senate Judiciary Committee, he declined to call three female witnesses who could have corroborated Hill’s testimony. Instead, he let the all-white, all-male senators on the committee eviscerate Hill while many defended Thomas, who was narrowly confirmed.

“Biden is the wrong guy to bear the standard of any party purporting to speak for the victims of unaccountable power,” HuffPost’s Amanda Terkel wrote in 2017.

Biden has touted his work on legislation such as the Violence Against Women Act and his advocacy for sexual assault victims on college campuses. During a speech last week, he apologized for how he treated Hill. “She faced a committee that didn’t fully understand what the hell this was all about,” he said. “To this day, I regret I couldn’t give her the kind of hearing she deserved.”

But as Biden prepares to launch his 2020 bid, this is just the beginning of the scrutiny he’ll face.