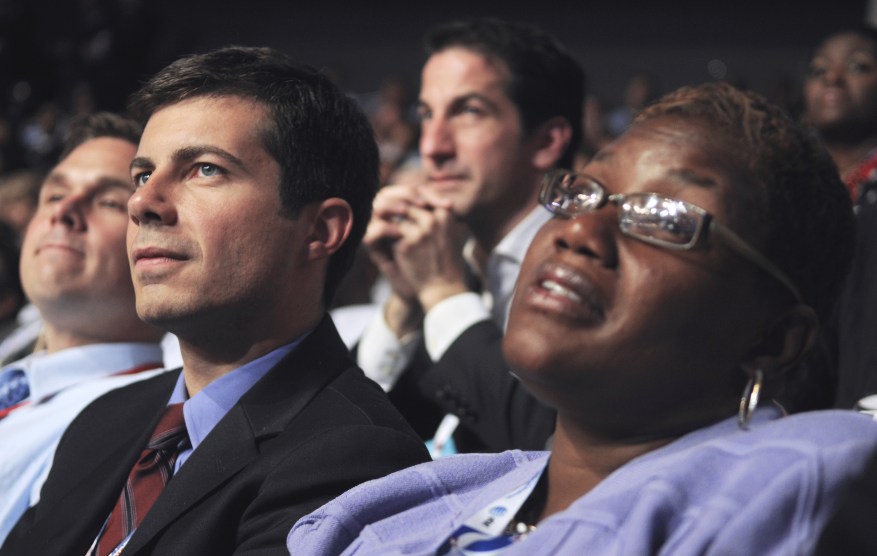 Earlier today, we told you about presidential hopeful Pete Buttigieg’s appearance in front of a sold-out crowd at the Commonwealth Club in San Francisco, Thursday night. He took the chance to share his plans to bring the rigor of running a small rust-belt town (South Bend, Indiana) to the White House. But there were many more moments from this wide-ranging hour-long chat with Mother Jones Editor-in-Chief Clara Jeffery that we think are worth highlighting. Here are five clips, including a candid back-and-forth about the challenges of coming out while in office, and what it really takes to beat Trump.

Growing up gay in Indiana

“You think there’s something wrong with you,” Buttigieg says of being in the closet in high school. The 37-year-old mayor stands out for being the first openly gay man to run for president from a major party—his husband is a fun Twitter follow. He spoke in personal detail about growing up gay in rural Indiana, hiding his sexuality while he served in the military, and finding love as an adult. Watch below:

"I went to high school under the illusion that there were no gay students… You think you're the only one. You think there's something wrong with you." —@PeteButtigieg, on growing up gay in Indiana https://t.co/hVPSQoXfG5 pic.twitter.com/R9ukrEf7Wt

“Mayor Pete”, as he’s known to his constituents, said that even though his electorate trended towards social conservatism, voters overwhelmingly supported his decision to come out. Stay for the kicker of this video:

"I had no idea what it was like to be in love. And I just thought I had to put an end to that… I realized it was time to come out."

"The only question was how voters would respond in my community… And they responded by reelecting me with 80% of the vote." —@PeteButtigieg pic.twitter.com/obxia8GN1w

Buttigieg (pron. Boot-edge-edge) relayed several big policy ideas throughout the talk, many of which he shares with other candidates in the crowded field. But Buttigieg said the strength of his ideas, as well as his commitment to addressing why voters went with Trump in the first place, would make him stand out. “A message is something that makes sense no matter who’re you’re running against.”

"The challenge for 2020 is, on one hand, of course, we've got to confront this president and this presidency… But that's not a message. A message is something that makes sense no matter who you're running against." —@PeteButtigieg https://t.co/qFU2ug2ycB pic.twitter.com/cP0jABD78S

Day One in the Oval Office

Buttigieg said his top priority would be democratic reform. “Every other issue we face, every policy issue—of which I believe the most urgent is climate—every one of those will not get solved properly as long as our democracy is this twisted,” he said.

Not without a sense of humor, the Millennial Mayor had some advice for democratic voters at large: “What you want to do is nominate a really forward-thinking…”

.@clarajeffery: How can Democratic candidates ensure they don't cripple each other and clear the path for a Trump reelection?@PeteButtigieg: "Right. What you want to do is nominate a really forward-thinking, inclusive, new-generation, young, good-looking mayor." 😂 pic.twitter.com/UAjfn8OADH

For a full, in-depth look at the event, and even more about Mayor Pete, you can check out our longer recap here.