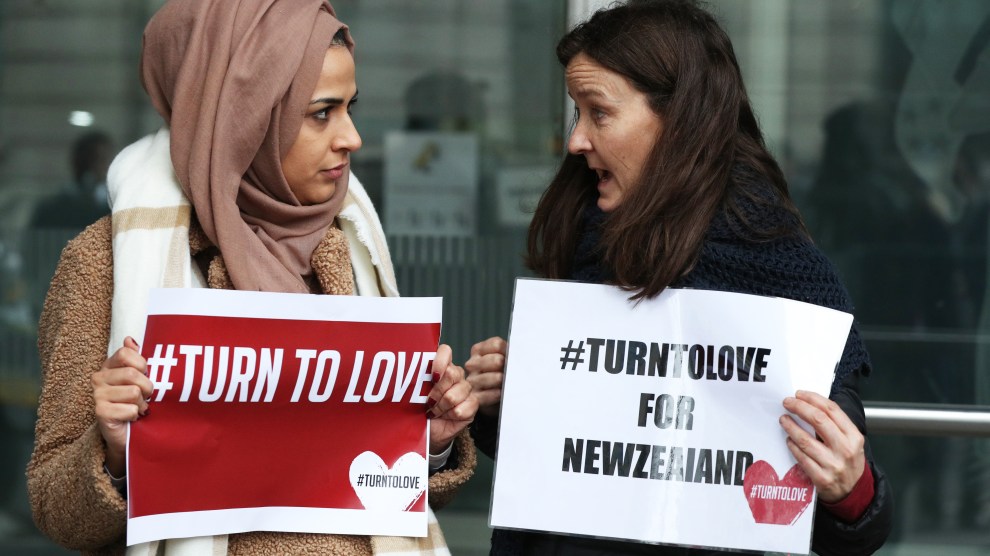 Members of the anti-terrorism campaign Turn to Love hold signs outside the New Zealand High Commission in London on Friday, following the mosque attacks.Jonathan Brady/PA Wire via ZUMA

After every mass murder, journalists, researchers, and horrified members of the public turn to the internet as they struggle to understand why the perpetrator would take so many lives. Often, those searches paint a picture of a disturbed individual who has been radicalized in dark, online rabbit holes.

But on Friday, the suspected gunman behind the Christchurch, New Zealand, mosque shootings appeared to take the process of internet radicalization to a disturbing new level—turning the massacre itself another dark internet rabbit hole designed to draw the attention of like-minded people around the world while attracting new allies to his cause.

“This definitely is a real-life shitpost.”

“This definitely is a real-life shitpost,” said Joel Finklestein, a researcher specializing in the digital spread of extremist content at the Anti-Defamation League and the Network Contagion Research Institute.

Shitposting is an internet term for pumping out low-quality and often ironic online content to get a reaction from other people. Finklestein explained that the gunman—who live-streamed the killings and distributed a detailed manifesto full of references to far-right memes—was able to pull off an extreme and tragic version of what white nationalist internet shitposters do all the time: publish incendiary content to enrage and confuse their opponents.

As Finklestein points out, the Christchurch gunman clearly aspired to do more than spark widespread anger while taking dozens of lives. He also wanted to bring in new recruits. His social media accounts, which were promptly taken down, looked like they had been quickly fashioned into repositories of the message he was trying to spread. His Twitter account was only created in February, and he appears to have not posted anything recently on Facebook until Wednesday, when he unloaded a batch of links outlining his white nationalist worldview.

The gunman left a small archive of his thoughts and actions, live-streaming the shooting on Facebook and leaving a lengthy document explaining some of his motivations, all peppered with bits of trolling to confuse readers and maximize his reach. During the livestream of the shooting, he shouted, “Remember, lads, subscribe to PewDiePie”—a reference to the popular Youtuber who has been criticized for veering too close to alt-right territory. His manifesto included memes popular on hate-filled internet message boards such as 4chan and 8chan; ironic nods to video games such as Fortnite and Spyro; and incendiary—and potentially misleading—praise for a conservative media figure.

It’s impossible to know the precise intent behind the manifesto, but it is filled with references that journalists with little 4chan experience could easily include in news stories or tweets in a manner that inadvertently gives more exposure to the shooter’s white supremacist goals. And more exposure means more potential converts—or, in the words of far-right internet posters, more opportunities to “red-pill” readers.

Becca Lewis, who studies online political subcultures at Data & Society, a digital research institute, recalled on Twitter how this happened with past coverage of massacres perpetrated by members of extremist internet communities. She pointed to how the term “incel”—which refers to “involuntary celibate” men, who often espouse misogynist rhetoric online—was virtually unknown until it was mentioned in media reports about murders carried out by people linked with that community. “Then any disillusioned young man could start googling his way down a rabbit hole just by using that search term,” Lewis noted.

Joan Donovan, another internet extremism researcher at Data & Society and Harvard, argues that the New Zealand gunman was deliberately trying to provoke a similar media reaction.

“The manifesto is bait. It is loaded with keywords that lead down far-right rabbit holes. Do not repost,” she advised on Twitter. “Most of the NZ shooter’s social media is new. It’s an attempt to get journalists to see a unified narrative.”

“He tried to meme himself into existence by producing a press kit and quoting memes and social media influencers while carrying out such violence,” Donovan told Mother Jones.

The Christchurch shooter also exploited an unwitting ally—technology companies who have proven themselves unable or unwilling to stop the spread of hate speech on their platforms. Even though the murder video violated YouTube’s, Facebook’s and Twitter’s policies, it still spread rapidly across their platforms. Social media users and reporters documented how even hours Facebook took down the original livestream, copies of the footage were still careening across the social networks. It was instantly accessible to anyone who could search for the gunman’s name on the internet’s most popular websites.

The result: a horrific event made all the more devastating by the perpetrator’s ability to turn some of America’s most profitable companies into distributors of his ghoulish white nationalist recruiting video.