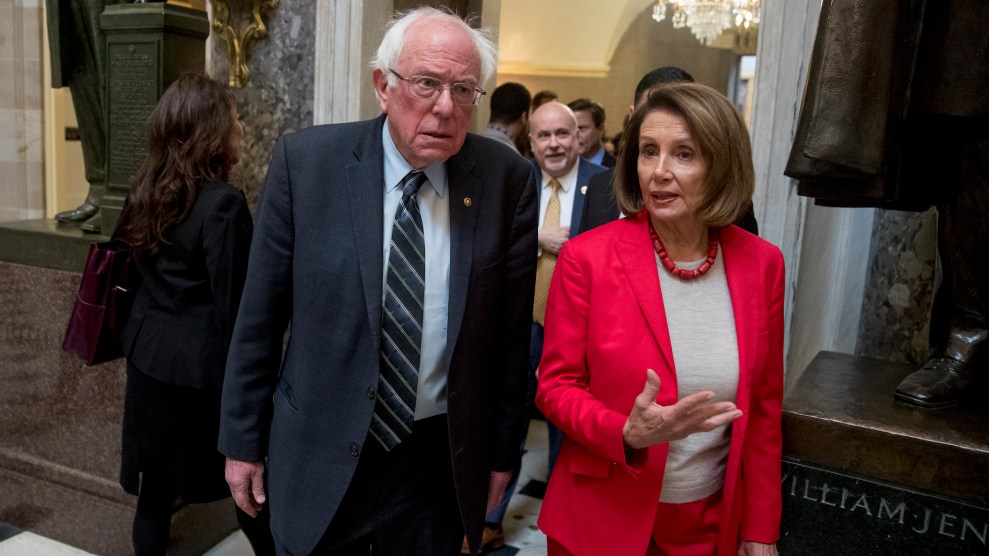 When President Donald Trump moved to dismantle Obamacare this week, House Democrats quickly rallied to defend it. On Tuesday afternoon, House Speaker Nancy Pelosi (D-Calif.) announced a new bill that would strengthen protections for people with preexisting conditions, expand coverage, and lower premiums—changes intended to shore up vulnerabilities in Democrats’ landmark health care law from nearly a decade ago.

“Now is not the time for watered-down, incremental measures that will only put a Band-Aid on a broken health care system.”

With 103 cosponsors, the bill drew widespread support from Democrats who, in recent months, have been fractured by debates over various proposals to reform the country’s health care system. As HuffPost noted on Wednesday afternoon, even the House’s staunchest supporters of Medicare for All—many of whom are seeking to outlaw private insurance and replace Obamacare with a government-run single-payer system—have lined up behind the new bill, which was introduced by Rep. Frank Pallone (D-N.J.) and is being championed by Pelosi.

“I’m happy to support any provision that strengthens the ACA and [plugs] some of the gaps that we’re seeing, particularly as it’s under assault by the president,” Rep. Alexandria Ocasio-Cortez (D-N.Y.) told HuffPost.

But outside the House, progressive support for Pelosi’s move was far from unanimous. Two of the country’s most prominent Medicare for All boosters quickly raised objections. Vermont Sen. Bernie Sanders, a frontrunner for the Democratic presidential nomination, told MSNBC’s Chris Hayes Tuesday night that he wouldn’t support the House bill. “The incremental reform I support is phasing in Medicare for All,” Sanders said, as he explained the four-year transition to single-payer envisioned in his influential 2017 Medicare for All legislation. Sanders is expected to release a new version of his bill the coming weeks.

Sanders voted for Obamacare in 2010 and has repeatedly sided with Democrats against Trump’s efforts to repeal the law, but he appeared to draw the line at Pelosi’s efforts to expand its reach. “Right now, we are working on what I fought for my entire life,” he told Hayes. “Health care is a right. It has to be publicly funded. It has to be comprehensive. The current system…is dysfunctional. It is enormously wasteful.”

We must defend the ACA from Trump’s assault and protect people's existing coverage. However, protecting the ACA will not fully solve the health care crisis. To finally guarantee health care as a right, we must take on the insurance industry and pass a Medicare for All bill.

National Nurses United—the country’s largest nurses’ union and an early and vocal backer of Medicare for All—agreed with Sanders, who it had endorsed during the 2016 presidential race. “We nurses find the new legislation proposed by Speaker Pelosi’s office disappointing and totally inadequate to address the health care crisis confronting our country,” NNU president Zenei Cortez said in a statement. “Now is not the time for watered-down, incremental measures that will only put a Band-Aid on a broken health care system.”

But Rep. Pramila Jayapal (D-Wash.), the lead author of a House Medicare for All bill, took a different tack. Jayapal—along with more than 40 of the 106 co-sponsors of her bill—have signed on to the Obamacare-expansion effort.

“We’re firmly behind the goal of universal coverage, and we support legislation that brings us closer to that goal.”

For Jayapal, who co-chairs the Congressional Progressive Caucus, backing Pelosi’s bill isn’t just about making modest improvements to Obamacare. It’s also part of a more ambitious strategy. While Sanders sees the legislation as a roadblock to Medicare for All, Jayapal sees it as an opportunity to get Democratic leadership to take progressive members more seriously.

“One of the biggest attacks we get inside the building is that Medicare for All is a distraction to fighting this existential threat to the ACA,” a member of Jayapal’s staff told Mother Jones. “It’s critical for us to recognize that threat. Pramila has been on the front lines of the fight to protect it.”

It’s a strategy that seems to be paying off. Earlier this year, Jayapal secured a commitment from Pelosi to hold hearings on her Medicare for All legislation, a first in the history of single-payer bills.

The nurses’ union, which has been orchestrating a grassroots push for Jayapal’s bill, says it isn’t bothered by her move. “NNU understands that legislators will be supporting various proposals and that’s for them to speak to themselves,” a spokesperson said.

Other progressive organizations that support Medicare for All have lined up behind Pelosi’s bill. Indivisible—the liberal grassroots organization that has mobilized its million-plus members to defend Obamacare while also providing input on Jayapal’s legislation—says Pelosi’s measure would move the system in the right direction. “We’re firmly behind the goal of universal coverage, and we support legislation that brings us closer to that goal,” says Indivisible’s Angel Padilla.

Social Security Works, a progressive economic justice organization that also worked with Jayapal on her bill, takes a similar view. “We support Medicare for All, we support stabilizing the ACA, and we support steps that build momentum towards Medicare for All”—such as lowering the Medicare eligibility age—the group said in statement.

But Social Security Works drew its own line in the sand, adding that it does not support “buy-in/public option bills that are designed to take away momentum from Medicare For All and preserve the private insurance industry.” That’s a reference to plans like the Medicare for America bill—introduced by Reps. Rosa DeLauro (D-Conn) and Jan Schakowsky (D-Ill)—that would offer consumers a choice between keeping their private insurance or purchasing insurance from Medicare instead. Presidential candidate Beto O’Rourke recently embraced DeLauro and Schakowsky’s legislation as an alternative to a single-payer system.

On this point, Jayapal agrees; she doesn’t support any of her colleague’s Medicare buy-in proposals that would preserve the private insurance industry. If reimaging the health care system is on the table, it is to be imagined without private insurers.

“Ultimately, the only way to get the health outcomes we want and universal coverage is to implement Medicare for All,” Jayapal said in a statement, “and I am 150 percent committed to moving Medicare for All forward.”

For her part, Pelosi claims to be looking forward to a raucous debate in the future. According to the Washington Post, she told her caucus members that legislation to shore up Obamacare did not preclude efforts to build an entirely new system down the road. “This is no substitute to anything else—this is a path to everything else,” she said. “Let’s use the word ‘LOVE.’ It means, ‘Let Other Versions Exist.’”