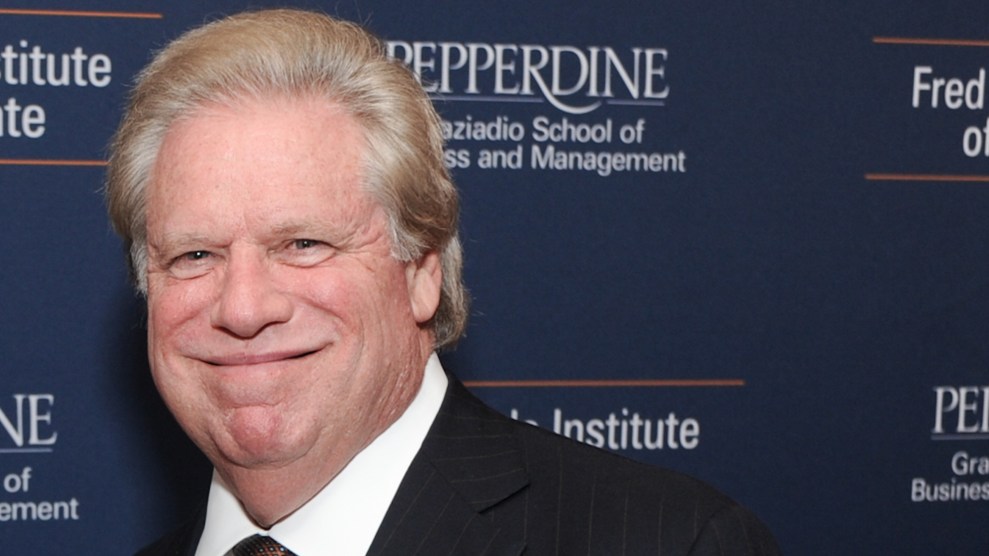 Agents were authorized to use the megadonor’s hands and face to unlock any phones that required fingerprint or facial scans.

The Washington Post reported in August that the Justice Department was investigating Broidy. The sealed warrant offers new details of federal authorities’ investigation of allegations that Broidy had attempted to cash in on his Trump White House connections in dealings with foreign officials. It also shows that the government took a more aggressive approach with the Trump ally than was previously known, entering his office and removing records—just as it did with Trump’s personal lawyer Michael Cohen.

Broidy served as a major Trump campaign fundraiser and was the national deputy finance chair of the Republican National Committee until he resigned in April 2018, when it was revealed he had agreed to secretly pay off a former Playboy model in exchange for her silence about their affair.

The search warrant cites three potential crimes that authorities are investigating: conspiracy, money laundering and violations of the law barring covert lobbying on behalf of foreign officials. To obtain a search warrant, authorities have to convince a judge that there’s a probable cause they will find evidence of those specific crimes.

The warrant, filed in July 2018, targeted Broidy’s office in Los Angeles. The scope of what authorities were seeking was broad. They planned to seize any evidence related to a list of dozens of people, countries and corporate entities, according to the warrant. Among the names on the list are Rick Gates, the former Trump campaign official who has pleaded guilty in the Mueller probe; Colfax Law Office, the firm founded by Robin Rosenzweig, Broidy’s wife; and several foreign countries.

Spokespeople for the Justice Department and the FBI declined to comment for this story.

Broidy’s attorney, as well as a spokesman, did not answer a list of detailed questions sent by ProPublica.

Broidy, an investor based in Los Angeles, pleaded guilty in 2009 to charges connected to his role in a major New York state public corruption and bribery case. But after backing Trump for president, he saw his star rise again. After the inauguration, he played a central role in filling administration vacancies, according to reports by ProPublica and others.

However, he once again quickly became mired in controversy, amid allegations of influence peddling and his dealings with the former Playboy model.

The search warrant shows that federal authorities are interested in Broidy’s alleged work for the Malaysian financier Jho Low, who is at the center of a sprawling international scandal known as 1MDB. In November, the Justice Department unveiled a bribery and money laundering case against Low.

In a separate filing in November, the Justice Department alleged that Broidy was paid by Low to lobby Trump administration officials to ease off on U.S. investigations into Low. Broidy is not identified by name in the filings, but he is widely reported to be the person referred to as “Individual No. 1.” Broidy has not been charged with a crime, and it’s unclear what the status of the investigation is.

Pras Michel, a member of the hip-hop group The Fugees and an associate of Low’s, funneled the money to pay Broidy into the United States, the Justice Department alleged. Asked about the Broidy search warrant, a lawyer for Michel, Barry Pollack, said: “There has been news of this Broidy investigation for many months. Mr. Michel has not been charged with any wrongdoing whatsoever related to Mr. Broidy or anyone else.”

The New York Times reported last year that Broidy worked with Nader to steer the White House toward decisions benefiting the UAE and Saudi Arabia. Documents reviewed by the Times showed that Nader tempted Broidy with the prospect of more than $1 billion in contracts for Broidy’s private security company. Hacked communications showed Nader praised Broidy for “how well you handle Chairman”—a reference to Trump.

Nader became a cooperating witness in special counsel Robert Mueller’s probe of Russian influence in the 2016 election, according to multiple news reports.

Broidy’s attorney has in the past responded to the allegations with a statement saying Broidy “has never agreed to work for, been retained by nor been compensated by any foreign government for any interaction with the United States Government, ever. Any implication to the contrary is a lie.”

According to the warrant, federal authorities also sought to seize any records related to China and Guo Wengui, a Chinese businessman and dissident who fled to New York, where he publicly accused the Chinese government of corruption.

The Times reported that Broidy explored plans to use his influence with the White House to force Guo out of the United States, apparently as part of an effort to curry favor with the Chinese and other foreign officials, and ultimately earn a payoff.

Rousseau’s Instagram account shows him bouncing from Rio to Paris to Ibiza, frequently surrounded by models. “If you want to be successful, you need the beautiful people,” he told Crain’s New York in 2007, which described him as a specialist “in bringing agency models to clubs.” In another series of pictures, he is at an oil site in Haiti with workers he describes as his drilling crew. Rousseau made a foray into politics in 2012 when he donated tens of thousands of dollars to several Democratic Party groups.

Filings in a court case over unpaid taxes describe Rousseau as an “entrepreneur” with income swinging from under $1,000 for 2009 to over $2 million in 2013. He paid a long-standing bill for back taxes and penalties of more than $700,000 in late 2017, the filings show.

The address for Intelligent Resources is a house on Miami Beach’s exclusive Hibiscus Island. The person answering the door at the house last week told a reporter he had rented the house on Airbnb. Rousseau didn’t respond to requests for comment.