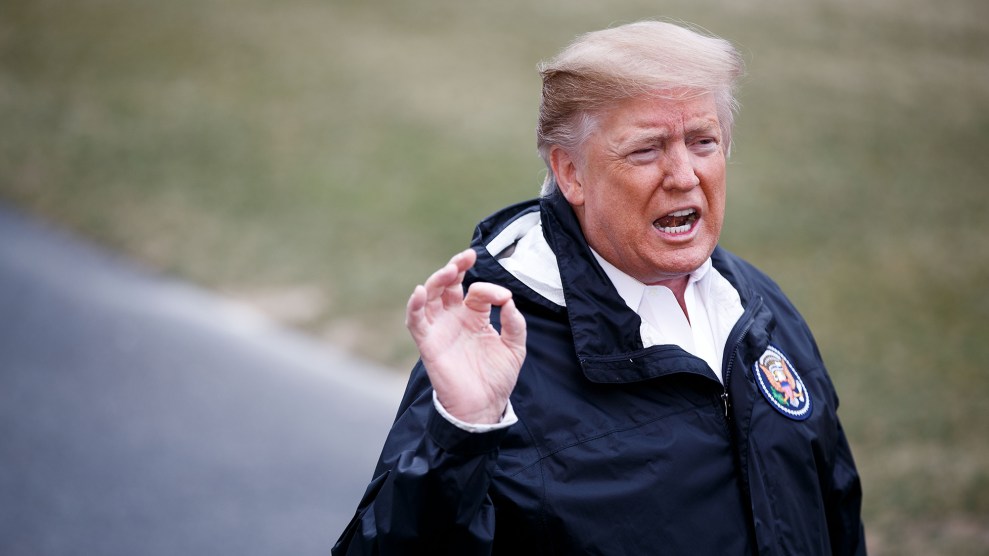 President Donald Trump speaks to reporters before leaving for Alabama to survey areas devastated by powerful tornadoes, in Washington D.C., on March 8, 2019. Ting Shen/Xinhua via ZUMA

On Monday, President Donald Trump will again plunge the nation into a bitter fight and more uncertainty by requesting $8.6 billion in funding for a border wall, a move that may threaten another government shutdown this fall. The budget request comes shortly after the longest government shutdown in the country’s history, thanks to the fight over border wall funding. Like last time, Democrats are already saying no to additional money.

“Congress refused to fund his wall and he was forced to admit defeat and reopen the government,” House Speaker Nancy Pelosi (D-Calif.) tweeted Sunday in response. “The same thing will repeat itself if he tries this again. We hope he learned his lesson.”

White House economic adviser Larry Kudlow signaled to the Washington Post that more battle is to come. “I would just say that the whole issue of the wall, of border security, is of paramount importance,” he said. “We have a crisis down there. I think the president has made that case very effectively.” Trump re-opened the government in January after failing to get $5.7 billion for the wall. When Democrats later agreed to $1.375 billion in February to keep the government open, Trump declared his intention to redirect $6.7 billion in funds for other projects toward a wall. The government is currently funded through the end of the fiscal year on September 30, 2019.

The president has backed himself into a corner politically over the issue. His conservative base expects him to keep fighting for it, and by declaring it an emergency—one so urgent that he is attempting to use his emergency powers to fund it without Congressional approval—he has cemented it as an issue he cannot walk away from. This dilemma is on full display in Trump’s Twitter feed, where he is both attacking his ultra-conservative critic, Ann Coulter, and promising that he is winning on the issue.

Wacky Nut Job @AnnCoulter, who still hasn’t figured out that, despite all odds and an entire Democrat Party of Far Left Radicals against me (not to mention certain Republicans who are sadly unwilling to fight), I am winning on the Border. Major sections of Wall are being built…

While Trump’s request for billions in wall funding appears dead on arrival in the Democratic-controlled House, so too will be other extreme pieces of his budget proposal. Trump’s budget request calls for slashing Medicaid, the health care program for poor and disabled Americans, by $1.1 trillion, according to a summary obtained by the Washington Post. It would cut hundreds of billions from food and housing assistance, and through changes to student loan programs and the US Postal Service.