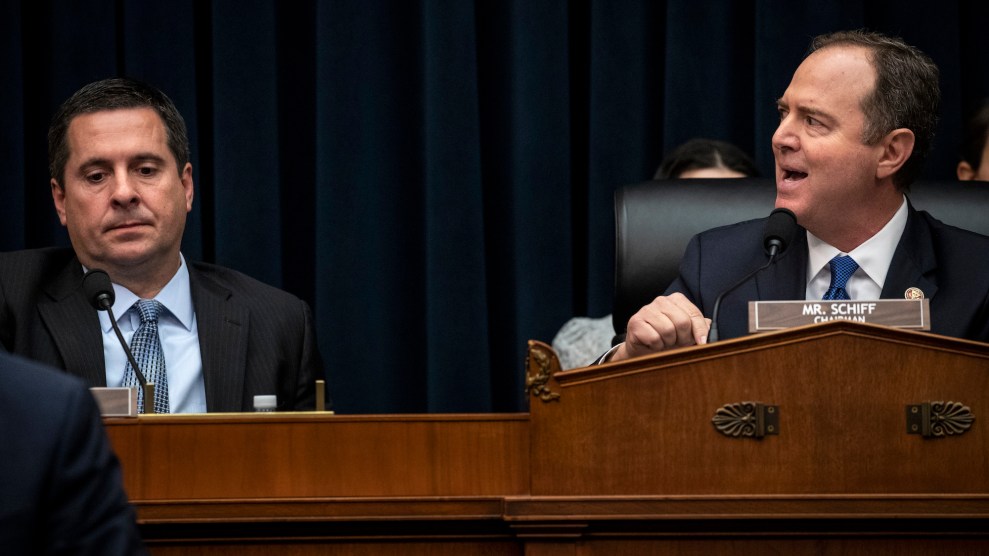 The results of a key part of Special Counsel Robert Mueller’s investigation were excluded from the four-page letter that Attorney General William Barr sent to Congress, House Intelligence Committee Chairman Adam Schiff (D-Calif.) said during a hearing on Thursday.

Since Barr’s released his letter on Sunday, Republicans have asserted it clears President Donald Trump of suspicion that his campaign colluded with Russia during the 2016 election. Barr wrote that Mueller’s investigation “did not establish that members of the Trump Campaign conspired or coordinated with the Russian government in its election interference activities.”

Democrats and many independent critics call Barr’s summary wildly insufficient. The New York Times reported on Thursday that the Mueller report is more than 300 pages long. That length suggests that Barr may have left out of his summary significant information that reflects negatively on Trump. Barr’s letter also narrowed the definition of coordination or conspiracy in various ways, critics note. Barr, for instance, did not say if Mueller determined whether the Trump campaign coordinated with Russians nominally outside the government—such as Natalia Veselnitskaya, a Kremlin-linked lawyer who offered the Trump campaign dirt on Hillary Clinton—or with other with other foreign entities, such as WikiLeaks or Middle Eastern governments.

In addition to investigating multiple Trump campaign aides, the FBI reportedly opened a counterintelligence investigation in 2017 into whether Trump himself acted, wittingly or unwittingly, as a Russian agent.

“We do not yet know the results of the counterintelligence investigation led by Comey and then Mueller,” Schiff said in an opening statement at a hearing on the Kremlin’s use of financial intelligence and other means to further its intelligence efforts. “It is not clear whether, or to what extent, the Mueller report, which is focused on prosecutorial decisions, will even discuss counterintelligence findings.”

Schiff argued that the counterintelligence issues “may ultimately have the more profound impact on our security and policy” than other parts of Mueller’s probe.

Republican members of the committee, echoing Trump tweets, used the hearing to call for Schiff to step down as the panel’s chairman. In a letter released during the hearing, the nine GOP members of the panel charged that Schiff had misrepresented classified information in public statements and suggested that he had leaked confidential committee information. The Republicans claimed that the Mueller report, which they have not seen, refutes Schiff’s claims that there is evidence that the Trump campaign colluded with Russia. They told Schiff that they “have no faith in your ability to discharge your duties in a manner consistent with your Constitutional duty and urge your immediate resignation as Chairman of this Committee.”

Schiff responded by noting that the many publicly known contacts between Trump allies and Russian emissaries—such as the June 2016 Trump Tower meeting between Veselnitskaya and key Trump aides—show the Trump campaign was willing to work with Russia in 2016. He added that Trump and members of his campaign did not report Russian overtures to the FBI and that they repeatedly lied about the contacts. “I think it’s immoral,” Schiff said. “I think it’s unethical. I think it’s unpatriotic. And yes, I think it’s corrupt and evidence of collusion.”

Intelligence committee Republicans in 2017 launched a limited investigation into Trump and Russia. While they interviewed many people, they declined to use their subpoena power to check the claims of witnesses; allowed the White House to dictate terms of many the panel’s interviews; and prematurely ended the probe last year, Democrats say.

The committee’s former chairman, Rep. Devin Nunes (R-Calif.) was forced to step aside from leading the probe due to suspicions that he made “unauthorized disclosures of classified information” to the White House. Nunes appeared to have tried to manipulate committee findings to bolster Trump’s baseless claim that former President Barack Obama ordered the US intelligence community to wiretap Trump Tower during the 2016 presidential campaign. The House Ethics Committee last year cleared Nunes of allegations that he disclosed classified information or violated House rules. Nunes was among the signers of the GOP letter on Thursday.