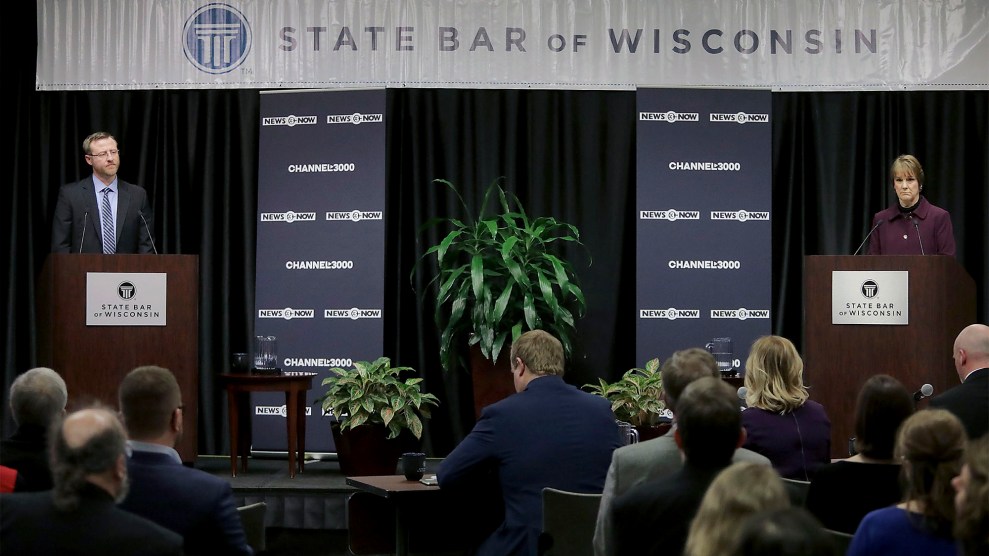 Update 4/3/19: The morning after the election, conservative candidate Brian Hagedorn led by fewer than 6,000 votes out of 1.2 million cast. Hagedorn declared victory, but the margin is small enough that liberal candidate Lisa Neubauer can request a recount.

It hasn’t gotten much attention, but a judicial election on Tuesday could help set the direction of politics in Wisconsin for the next decade.

The race is for an open seat on Wisconsin’s Supreme Court, which in recent years has upheld Republican efforts to gut voting rights, deregulate campaign finance laws, and undercut unions. Conservatives currently hold a 4-3 majority on the court. Since the seat is being vacated by a retiring liberal judge, a victory by the progressive candidate, Wisconsin Court of Appeals Chief Justice Lisa Neubauer, wouldn’t shift the balance, but it would give progressives a chance to take back control of the court for the first time in two decades in another judicial election in 2020.

On the other hand, a win for the conservative Brian Hagedorn, a fellow appeals court justice who served as chief counsel to former Republican Gov. Scott Walker, could cement the right’s control of the court for years to come. And it would elevate to the state’s highest court a man whose extreme views have caused even some GOP-aligned groups to disavow his candidacy.

As a law student at Northwestern University, Hagedorn authored a blog from 2005 to 2006, addressed to “fellow soldiers in the culture war,” in which he called Planned Parenthood a “wicked organization,” the NAACP a “disgrace to America,” and Roe v. Wade “the worst and most unjustifiable decision in history.” He bemoaned a 2003 Supreme Court ruling striking down a Texas anti-sodomy law, arguing that it would make bestiality legal. “The idea that homosexual behavior is different than bestiality as a constitutional matter is unjustifiable,” he wrote. “There is no right in our Constitution to have sex with whoever or whatever you want in the privacy of your own home (or barn).”

Hagedorn’s writings could be dismissed as youthful indiscretions, but in 2016—a year after Walker had appointed him to the court of appeals—he founded a K-8 Christian school in suburban Milwaukee that bans LGBT teachers, students, and parents. “Immoral sexual activity,” which is grounds for dismissal, is defined in the code of conduct as “any form of touching or nudity for the purpose of evoking sexual arousal apart from the context of marriage between one man and one woman.”

As a law student, Hagedorn called Planned Parenthood a “wicked organization,” the NAACP a “disgrace to America,” and Roe v. Wade “the worst and most unjustifiable decision in history.”

Hagedorn’s anti-LGBT positions led two major business groups, the Chamber of Commerce and the Wisconsin Realtors Association, which regularly back Republicans, to stay out of the race. (The Realtors initially endorsed Hagedorn, but after his anti-LGBT views became public, they rescinded their endorsement and asked Hagedorn to return their $18,000 contribution.)

As chief counsel to Walker from 2011 to 2015, Hagedorn defended some of the Wisconsin GOP’s most controversial policies, such as Act 10, which stripped collective bargaining rights from public sector unions, and a voter ID law that disenfranchised thousands of Democratic-leaning voters in 2016.

The conservative majority on the Wisconsin Supreme Court upheld many of those laws, including Act 10 and the voter ID law, while shutting down a high-profile investigation into Walker’s potentially illegal fundraising from conservative dark money groups. That made the court a target of disaffected liberals, who want to oust the conservative majority. (The races are technically nonpartisan, but the allegiances are clear: Neubauer has the support of major labor unions and women’s groups, and her husband is a former chair of the Wisconsin Democratic Party, while Hagedorn is backed by the National Rifle Association and the Koch brothers-funded Americans for Prosperity.)

In 2018, liberal judge Rebecca Dallet won an open seat on the court previously held by a conservative. If Neubauer wins on Tuesday and Democrats win another Supreme Court race in April 2020, liberals will have a majority on the court until at least 2025. Democrats are favored to win next year because the election will be on the same day as Wisconsin’s presidential primaries, when the competitive Democratic race is likely to turn out more voters than the Republican one. (Incumbent conservative justice Dan Kelly has already suggested he might not run for reelection.) That could allow Democrats to reverse the aggressive moves by Republicans to entrench their power over the past decade, such as measures stripping power from the state’s Democratic governor before he took office and heavily gerrymandered legislative districts that gave the GOP a big majority in the state legislature despite winning fewer votes than Democrats in 2018.

Neubauer has raised more than a million dollars from liberal groups like Planned Parenthood and labor unions, giving her a big financial advantage over Hagedorn. Former Attorney General Eric Holder, whose National Redistricting Action Fund contributed $350,000 on behalf of Neubauer, campaigned for her in Wisconsin in mid-March. “When I look at her opponent, I get nervous,” Holder said at a campaign stop in Madison. “He’s taken some really extreme positions. To put that person on the highest court in the state is dangerous.”

But it may be too little, too late. The election is a barometer of whether liberal enthusiasm in 2018 can carry over to the next election cycle, and whether Democrats will continue to vote in large numbers in down-ballot races with the presidential election already drawing so much attention. If Neubauer wins, her election will be a major blow to Republican efforts to retain power in this critical swing state.