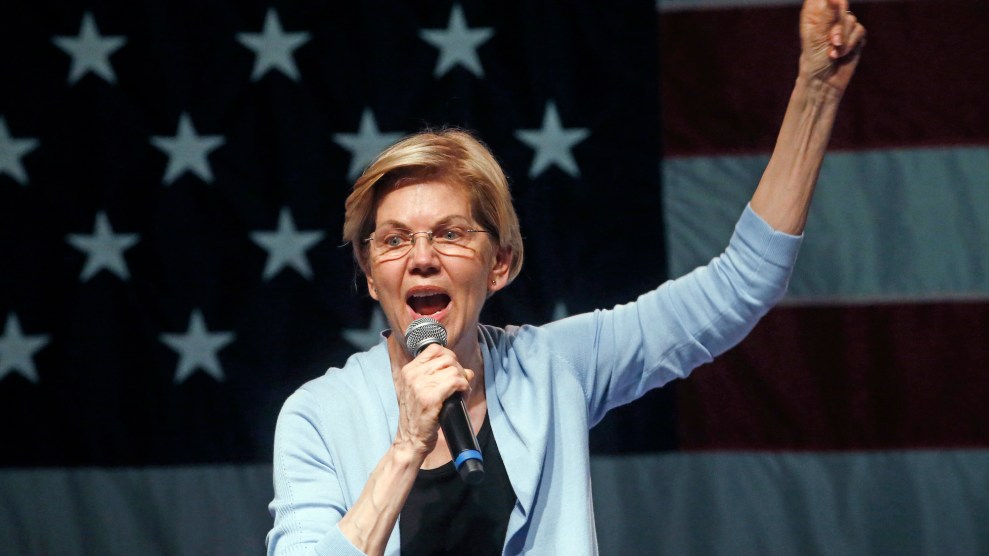 Elizabeth Warren said Friday afternoon that the House of Representatives should “initiate impeachment proceedings” against President Trump. Warren’s comments—the strongest yet from a major Democratic presidential candidate—come one day after the release of a redacted version of special counsel Robert Mueller’s report on his investigation into contacts between the Trump campaign and Russia.

The Massachusetts senator and former law professor laid out her thinking in a four-part Twitter thread Friday afternoon. She explained that the Mueller report offers proof that Russia interfered in the 2016 elections and that Donald Trump “welcomed that help.” After his election, Warren added, Trump “obstructed the investigation into that attack.”

Citing a section of the report that highlights Congress’s power to “prohibit” a president’s “corrupt use of his authority,” Warren argued that the proper vehicle for exercising that power is impeachment.

Mueller put the next step in the hands of Congress: “Congress has authority to prohibit a President’s corrupt use of his authority in order to protect the integrity of the administration of justice.” The correct process for exercising that authority is impeachment.

Warren concluded that the evidence should compel federal lawmakers to “set aside political considerations and do their constitutional duty.” In other words: “That means the House should initiate impeachment proceedings against the President of the United States.”

The severity of this misconduct demands that elected officials in both parties set aside political considerations and do their constitutional duty. That means the House should initiate impeachment proceedings against the President of the United States.

While most of the Democratic presidential contenders have pointed to Mueller’s findings as evidence of Trump’s corruption, Warren’s comments go considerably further. The Massachusetts senator has made fighting political corruption a cornerstone of her career. Late last year, she introduced sweeping legislation that would, among other measures, ban foreign lobbying and establish a new independent agency dedicated to enforcing federal ethics and anti-corrupution laws in the executive branch. Some of those ideas found their way into the “For the People Act,” the Democratic political reform bill that passed the House earlier this year.

Other Democratic White House hopefuls have been more circumspect when discussing impeachment. During his 2018 Senate bid against Ted Cruz, Beto O’Rourke—who at the time was a congressman from Texas—said he would vote to move forward with impeachment hearings against Trump. Since entering the presidential fray, O’Rourke has said the matter is for Congress to decide, but he maintained his position that Trump committed “impeachable offenses.” O’Rourke told CBS last month that the 2020 election might be a better way to remove Trump from office. “I think the American people are going to have a chance to decide this at the ballot box in November 2020,” he said, “and perhaps that’s the best way for us to resolve these outstanding questions.”

Washington Gov. Jay Inslee, another Democratic presidential candidate, said Friday that impeachment “should not be off the table.”

It is clear that the president tried and tried and tried to stop the Mueller investigation. Congress needs to get to the bottom of what's going on here. Impeachment should not be off the table.https://t.co/ScPHa6eW6N